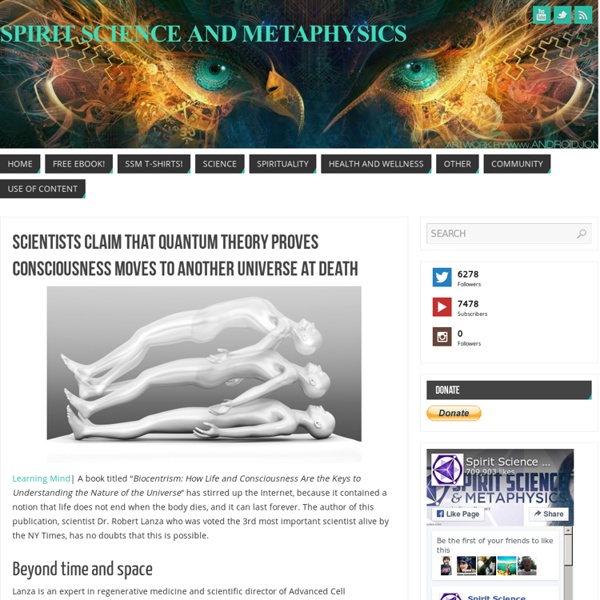 Learning Mind| A book titled “Biocentrism: How Life and Consciousness Are the Keys to Understanding the Nature of the Universe“ has stirred up the Internet, because it contained a notion that life does not end when the body dies, and it can last forever. The author of this publication, scientist Dr. Robert Lanza who was voted the 3rd most important scientist alive by the NY Times, has no doubts that this is possible. Beyond time and space Lanza is an expert in regenerative medicine and scientific director of Advanced Cell Technology Company. But not so long ago, the scientist became involved with physics, quantum mechanics and astrophysics. Lanza points to the structure of the universe itself, and that the laws, forces, and constants of the universe appear to be fine-tuned for life, implying intelligence existed prior to matter. The theory implies that death of consciousness simply does not exist. Lanza also believes that multiple universes can exist simultaneously. Multiple worlds Related:  the theory of everything

This 78-Year-Old Vegan Bodybuilder Might Make You Reconsider Your Diet Jim Morris was a competitive bodybuilder for 30 years, and became vegan within the past twelve. At 50 he was a vegetarian, and at 65 he was a vegan. Jim talks about health problems he endured when he ate meat and dairy products. He explains that if he continued to eat unhealthy animal based products he wouldn't be alive today. “The protein in animal products is filled with fats and chemicals and all sorts of stuff that's harmful to you. When I was competing and stuffing down all that stuff, I had lots of digestive problems, I was constipated and bloated, just miserable all the time. If you are curious about vegetarian and vegan diets, hopefully this post will inspire you to look into it further. Studies show that vegetarians and vegans live, on average, 6 to 10 years longer than meat-eaters and they're less likely to suffer from chronic illnesses. Credits: PETA.org, Collective Evolution

Brad Austen: The Different Dimensions and Our Multidimensional Selves Written by Brad Austen, Mindful-Meditations. A lot of material has been channeled in the new age community about the different dimensions and ascension. But what are these dimensions? The Earth has multiple dimensions, which remain invisible until you are vibrating to that particular dimension. Dimensions aren’t so much a place, but a state of being and vibration. The same is happening with our bodies. Our multidimensional selves contain great wisdom and knowledge. Mediums and psychics are able to tap into the akashic records to reveal information that normally isn’t within our awareness. As humanity continues to ascend, we will heal our bodies and past life karma. As humanity begins to vibrate higher, new forms of healing and technology will be made available. I believe we have a very bright future ahead of us. Like this: Like Loading...

Brazilian Scientist: Ayahuasca/DMT Can Effectively Treat Cancer by Cassius Methyl Eduardo Schenberg, of the University of Sao Paulo, Brazil, recently published a piece in Sage Journals, detailing his belief that Ayahuasca has cancer-fighting abilities, essentially encouraging the legalization of research in the field. He says, “There is enough available evidence that Ayahuasca’s active principles, especially DMT and harmine, have positive effects in some cell cultures used to study cancer, and in biochemical processes important in cancer treatment, both in vitro and in vivo,” and “Therefore, the few available reports of people benefiting from Ayahuasca in their cancer treatment experiences should be taken seriously, and the hypothesis presented here, fully testable by rigorous scientific experimentation, helps to understand the available cases and pave the way for new experiments.” Ayahuasca, as many viewers of this article likely know, is a psychoactive, ancient, sacred ancient brew, with deep roots in South American shamanic practice. Sources:

How To Have An Out Of Body Experience Robert Monroe's Method In his book, Journeys Out of the Body, Robert Monroe describes a complicated-sounding technique for inducing OBEs. In part, it is similar to other imagination methods, but it starts with induction of the "vibrational state". The next step involves entering the state bordering sleep (the hypnagogic state). After first achieving this state, Monroe recommends to deepen it. Once you have achieved the vibrational state, you have to learn to control it, to smooth out the vibrations by "pulsing" them. To leave the body, Monroe advocates the "lift-out" method.

Quantum Process To Slow Time And Savor The Moment Updated November 22, 2014 by in5d Alternative News * Click HERE to visit our Official Facebook page and be sure to "Like" us!!! (opens in a new window) * Also visit in5D Connection where you can find your soul mate or join one of our amazing groups. EVERYONE is welcome! by Kim Caldwell guest writer for In5D.com “What lies behind us and what lies before us are tiny matters compared to what lies within us.” ~ Henry Stanley Haskins There is a simple way to direct the flow of energy that will slow time and takes less than a minute to do. I was blessed to attend a workshop with the world-renowned Genevieve Paulson . . During our workshop Genevieve casually mentioned an exercise she uses to slow time. This is when I realized that we have much more control over time in our lives than we realize. The process for slowing time is as follows. Genevieve also mentioned a quote that I loved by Fritz Perls , “Anxiety is excitement without breathing.” I send you peace and blessings

THEFT BY DECEPTION: BAR ASSOCIATION HISTORY & WHO OWNS THE U.S. {THE REAL AMERICAN HISTORY NOT TAUGHT IN SCHOOLS ON THE 227th ANNIVERSARY OF THE FIRST 4th Of July 1776} History of "BAR ASSOCIATIONS" The Crown Temple Secret Society of theThird Way Order by Rule of Mystery Babylon. The Templars of the Crown. The governmental and judicial systems within the United States of America, at both federal and local state levels, is owned by the "Crown," which is a private foreign power. First, a ......snip... ... between Fleet Street and Victoria Embankment at the Thames River. Although they vehemently deny it, all Bar Associations in the U.S. , such as the American Bar Association, the Florida Bar, or California Bar Association, are franchises to the Crown. They are known collectively as the "Crown." The U.S.A. is not the free and sovereign nation that our federal government tells us it is. The banks Rule the Temple Church and the Attorners carry out their Orders by controlling their victim's judiciary. Definitions You Never Knew: ATTORN, v.i. ESQUIRE, n.

What's The Difference Between Astrology And Tarot - Freeastrology123 At first sight Astrology and Tarot might not seem terribly closely related; astrology is based on the movement of heavenly bodies as they appear from Earth, whilst Tarot cards are 78 pieces of cardboard with some decidedly odd pictures on them. Astrology is the far older discipline and has been dated to the 3rd millennium BC. Written evidence for the use of Astrology dates back to 1700 BC during the reign of the Babylon King Sargon of Akkad. The history of the tarot is a little less certain. It seems that mystical cards were used as a form of prediction in India and the Far East in ancient times; however, how much these had in common with the modern Tarot pack is debateable. By the Middle Ages the Tarot had reached Europe, tradition has it that the cards were brought by Gypsies or even the Knights Templar (the Knights Templar do seem to have been a busy bunch). So what do the Tarot and Astrology have in common? Tarot on the other hand is rather different.

Quantum biology: Do weird physics effects abound in nature? 28 January 2013Last updated at 00:05 GMT By Jason Palmer and Alex Mansfield BBC News and BBC Radio Science Unit The multi-billion-dollar fragrance industry might just benefit from the ideas in quantum biology Disappearing in one place and reappearing in another. Being in two places at once. This kind of weird behaviour is commonplace in dark, still laboratories studying the branch of physics called quantum mechanics, but what might it have to do with fresh flowers, migrating birds, and the smell of rotten eggs? Welcome to the frontier of what is called quantum biology. It is still a tentative, even speculative discipline, but what scientists are learning from it might just spark revolutions in the development of new drugs, computers and perfumes - or even help in the fight against cancer. The idea that biology - impossibly warm, wet and messy to your average physicist - should play host to these states was almost heretical. What makes more sense is the quantum effect of entanglement.

In essence, we’d be Space Orcs.