The History and Evolution of Social Media 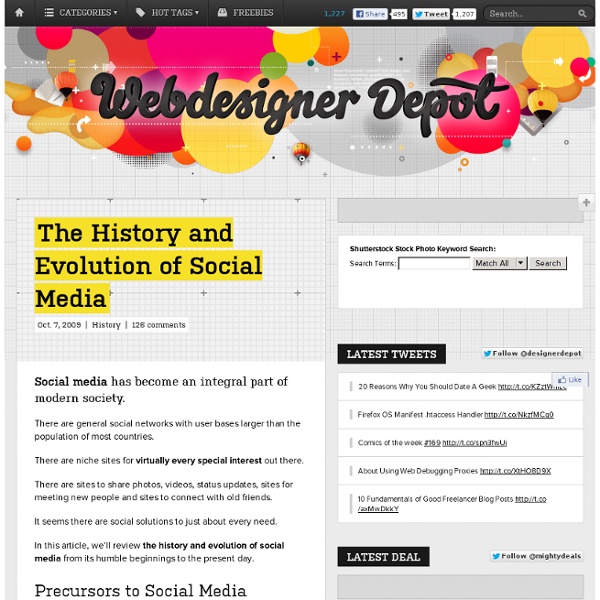 Social media has become an integral part of modern society. There are general social networks with user bases larger than the population of most countries. There are niche sites for virtually every special interest out there. There are sites to share photos, videos, status updates, sites for meeting new people and sites to connect with old friends. It seems there are social solutions to just about every need. In this article, we’ll review the history and evolution of social media from its humble beginnings to the present day. Precursors to Social Media Usernets Usenet systems were first conceived of in 1979 by Tom Truscott and Jim Ellis. Usenets have no centralized server or dedicated administrator, setting them apart from most BBSs and forums. Group sites such as Google Groups and Yahoo! BBSs (Bulletin Board Systems) The first BBSs came online in the late 70s. While there were legitimate BBSs, most were at least somewhat involved in illicit, illegal, or other shady practices. Online Services

The social network where no one knows your name Online, you can project whatever identity you like. But for some people, it's easier to have no identity at all. A new social networking site, Social Number, caters to those who have a preference for anonymity. Instead of a name or a handle or a thumbnail photo of themselves, users are identified only by a number. In this way, the site encourages users to discuss anything, from a bad job to a hot-button social issue to a substance-abuse problem, without fear that the conversation could be connected to their real-world identity. Meet the Man Behind the Map: Washington, D.C.'s and Baltimore's Historical Trains, Subway-Style - Curbed Interviews The remnants of abandoned train lines are still visible to this day, often drawing curiosity from what David Edmondson calls "legacy train nerds." As a railway enthusiast, himself, Edmondson became tired of not knowing where these train lines were or how they connected, deciding to take it into his own hands to map each line in a colorful subway-style map. He describes his maps as "quasi-geographical train service diagram[s]" that are able to show the rails and also the service of each train.

The Brief History of Social Media YouTube topped one billion monthly users with 4 billion views per day, and launched paid channels to provide content creators with a means of earning revenue. Facebook user total climbed to 1.11 billion. Twitter had 500 million registered users, with more than 200 million active. Apple's customers have downloaded over 50 billion apps and the company again improved iTunes, even as iPads were revolutionizing social games. Yahoo purchased Tumblr blogging-social media network, with 170 million users and 100 million blogs. Which Department Owns Social Media? In the past, it was easy for businesses or brands to segment different types of outreach or communication into departments. Marketing and public relations often operated separately from one another; human resources, customer service and technical support all operated in their own distinct branches. While overlap did occur, for the most part, actions and activities adhered to a set organizational structure. But how do you classify social media? Because it can be used in so many different ways, social media fits into many traditional departmental hierarchies.

What are the Effects of Social Media on Our Youth? First, What are the Good Parts? Social media sites such as Facebook and MySpace can also act as a great tool for professionals, both helping to market skills of small business owners and also find business opportunities, “you can also use these sites to network professionally. You might be able to help someone else out. For instance, one friend might mention on his profile that he needs a carpenter to come to his house. You might know someone who's perfect for the job; all you have to do is send a couple of messages and you've helped two friends out at the same time!” (www.howstuffworks.com)

July 18, 1992: The First Photo Uploaded to the Web, of CERN’s Parody All-Girl Science Band by Maria Popova Love and science set to song, from quarks to colliders. In 1990, shortly before a CERN physicist subverted gender and science stereotypes by adapting Alice in Wonderland as an allegory in quantum mechanics, a different type of delightful subversion was afoot at the famed European Organization for Nuclear Research, now home to the Large Hadron Collider: Michele Muller, a former British model and actor working as a 3D graphic designer for a virtual reality project at CERN, was dating CERN computer scientist Silvano de Gennaro and found herself frustrated with her boyfriend’s seemingly unending shifts.

5 Best Logo Maker and Logo Creator Tools Company logo is an important part of any business. It’s often the first thing your customer sees on your business card and your website. Company logo is the face of your brand. To create a logo, you can either spend some money to hire a graphic designer to create for you or you can use online logo generator do it yourself. To DIY, you can check out these 5 great free or affordable and user friendly online logo maker tools:

Mercedes-AMG I hold a dual role within Publicis Groupe, serving as both active Chief Strategy and Innovation Officer at VivaKi — a global leader in digital advertising solutions — and Chair for leading digital agencies DigitasLBi and Razorfish. At VivaKi, my team and I focus on incubating new ideas, approaches, partnerships and models for the next generation of data-driven marketing, storytelling, brand rethinking and the next two billion customers (China and India). In order to achieve these goals, I am responsible for Emerging Opportunities and Partnerships for VivaKi/Publicis Groupe. Emerging Opportunities includes co-creating the future with startups (VivaKi Ventures), media companies (The Pool) and brands (Finch 15). Partnerships includes working closely with Publicis Corporate and the leadership of Google, Facebook, Microsoft, Apple and many other global technology platforms, as well as a range of ad-tech specialists (BlueKai, Medialets, Adelphic Mobile).

Twitter's International Growth: Becoming the World's Water Coole Not to be outdone by Facebook's impressive global growth trend, Twitter's just revealed some statistics about how many people Tweet around the third rock from the sun. Get this: More than 60% of Tweeps aren't American. Matt Sanford, Twitter's head honcho engineer on its International Team, presents the stats (mainly in the form of that graph shown above) on the company's blog. He notes that the first Tweeps were employees in the company's San Francisco offices in 2006--naturally--but that since then Twitter's grown very rapidly into a "global information network." By its very nature, Twitter spreads like a virus, without regard for national boundaries.

Five Technologies to Make Sure Your Data Lives Forever They say that on the Internet, nothing ever goes away. This is true, for popular content that’s endlessly shared and remixed. But this kind of viral candy is only the tip of a really big iceberg. Beneath the surface of memes and naked celebrities lurks endless petabytes of data too boring for immortality. Wedding pictures, college essays, home videos, old emails — most of our data is in this category, and it can be disturbingly ephemeral. One of the major lessons from physics is that thermodynamics hates your guts.

Six Social Media Trends for 2012 Originally published on the Harvard Business Review blog. Each year at this time, I look forward and predict trends in social media for the coming year. But first, I look back at my predictions from last year. How’d I do? Not bad.