THE ART OF GLEN KEANE. 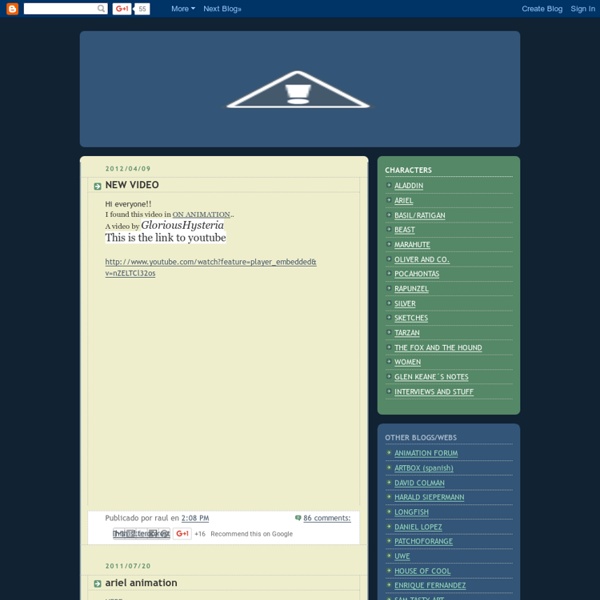 The first Gallery dedicated to artists lying behind cinema, comics, video games masterpieces…and who creat, to entertain, the most significant icons of our time.Created in 2004 by Diane and Jean-Jacques Launier on Saint-louis Island in paris, the Arludik Gallery has been the first in the world to show original artwork coming from animated movies, movies, comics, mangas, video games in order to design a new artistic movement : the ludic art.

J's stuff - Pixar's John Lasseter Answers Your Questions Ian Gavan/Getty ImagesJon Lasseter, the director of “Cars 2,” before the movie’s British premiere in London in July. Pixar Animation Studios hasn’t made a big deal of turning 25 this year. But it can celebrate several achievements, including its perfect 12-hit record at the box office, capped this year by “Cars 2,” which is being released on DVD on Tuesday.

www.angelfire.com/art3/kchendemos/ undefined adamanddog.tumblr Check out this amazing write-up by Jenny Lerew for Adam and Dog. It features a gallery of visual development art for the film. 3:36 am • 21 February 2013 • 378 notes Adam and Dow now available on iTunes! Adam and Dog is now available to own in HD on iTunes! We send a whole-hearted Thank you to everyone who has supported our efforts by watching our little film. TUMBLR - Keane Art It’s weird, it seems that when you run up against a problem, you always think it’s because “oh I’m not good enough”. But- it’s not that, it’s just that you’ve kind of hit the limit of your knowledge, and you’ve got to go out and observe and get and find and discover and nothing more. Those are really great, those are the best times- when you feel like you stink and you can’t get it- that’s like, man, now the world is open and you’re ready to learn something new and you gotta go, you gotta take advantage of that. I have been Inspired by your art for years. But my question is this what is it that you believe makes your art stand out the most compared to the men who came before you and really paved the way for this wonderful art form.

A Disney artist imagines Wicked as an animated film Excuse me. Contrary to your opinion, there are plenty of us "unwashed masses in the flyover states" who would adore a film adaption of Wicked! Actually, as an Unwashed my own self, I rather like the 1st one better and I can tell you without hesitation that Wicked would play much better as an animated movie in Flyover Country than the 2nd one would. Animation Director Glen Keane Exclusive Interview TANGLED Over the last few months, I have had the pleasure to talk with nearly every major influence on Walt Disney Animation Studios’ upcoming 50th animated feature film Tangled — except for one person. That would be the legendary artist Glen Keane, who was originally the co-director for Tangled in its early stages and really pushed the film to meld hand-drawn fluidity with computer animation. Last month, while at the press junket for the film I was able to sit down with Keane to discuss hair, how far computer animation has come, the various roles he played in the film over the years, and the lineage of artists in his family. So hit the jump to check out the full transcript, and stay tuned all week for more on Tangled, which hits theaters on November 24.

Walt Disney Animation Studios Free Art Books online - resources for artists Freehand Drawing This free book serves as a manual to teachers and students alike. Anson Cross has created this book on the premise that all ideas and sentiments are based on natural objects, and that a person who cannot represent what they see, is unable to express the simplest of conceptions. Light and Shade This is a book exploring the principals of light and shade. An understanding of how to model form and the principals of light and shadow in basic geometric forms, lends itself to advanced drawing and painting whether painting the human figure, landscape or even works of abstract.

Do you want to play with me Hello Readers, this artwork created in Photoshop CS2 and with a Wacom Intuos 3. And now I will explain in detail about the making of this image. Hope many of you will enjoy. Sketch and Color Scheme The first thing here, is to choose the right colour scheme, it depends on a lot of things like mood, the story you want to tell... I want to do something really colourful and warm, so for the character I choose some very saturated orange mixed with yellow and pink, the background will be colder, a green will suit very well with the whole piece and the light will be a pale blue.

Related:
Related:  Food Explorations   -  Mars Explorations   -  Human Explorations Continued   -  Human Explorations ~Part III~ Continued   -  The History and Evolution of Social Media | Webdesigner Depot   -  It's Nice That   -  Free Music Archive   -  My Modern Met – The Big City That Celebrates Creative Ideas   -  Internet history, design, advanced use, help, security, important features...   -  Human World   -  Spiritual Website - Read Articles and Blogs related to Spirituality, Wellness, Lifestyle   -  the Movie title stills collection   -  The Evolution of Western Dance Music!   -  Mars Science Laboratory   -  45 Amazing Facts for National Trivia Day | Mental Floss   -  Texter   -  PRINT.PM | Daily inspiration for Print lovers.   -  Every Noise at Once   -  166 Documentaries To Expand Your Consciousness   -  Can vegans stomach the unpalatable truth about quinoa? | Joanna Blythman | Comment is free | theguardian.com   -  Scientists Claim That Quantum Theory Proves Consciousness Moves To Another Universe At Death | Spirit Science and Metaphysics   -  40 Maps That Will Help You Make Sense of the World   -  Opt out of global data surveillance programs like PRISM, XKeyscore, and Tempora - PRISM Break   -  DevArt. Art made with code.   -  Transparent Textures   -  Tuning into the needs of the Indigo Children | Spirit Science   -  200+ Consciousness Raising Documentaries   -  This 8 year old kid uses crystal grids to transmute negative energy and explains how it works | Spirit Science   -  These 29 Clever Drawings Will Make You Question Everything Wrong With The World   -  Science Confirms Turmeric As Effective As 14 Drugs | The Mind Unleashed   -  38 Awesome Crystals for Spiritual Growth   -  Have We Been Interpreting Quantum Mechanics Wrong This Whole Time?   -  10 Mind-Blowing Theories That Will Change Your Perception of the World   -  The Top 50 Cities To See In Your Lifetime | HuffPost   -  Paralogical Thinking | Science and Nonduality   -  30 Abandoned Places that Look Truly Beautiful | The Mind Unleashed   -  Movie: Julian Melchiorri on the first synthetic biological leaf   -  Why You Should Never Throw Away Orange or Banana Peels | The Mind Unleashed   -  Stanford Scientists Observe Man Travel Out of His Body and Into Space – What He Saw Was Remarkable