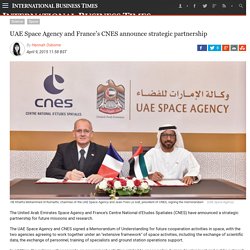 The UAE Space Agency and CNES signed a Memorandum of Understanding for future cooperation activities in space, with the two agencies agreeing to work together under an "extensive framework" of space activities, including the exchange of scientific data, the exchange of personnel, training of specialists and ground station operations support. In addition, the nations will cooperate on government activities related to space policy, human development and public outreach.

The memorandum was signed by HE Khalifa Mohammed Al Rumaithi, chairman of the UAE Space Agency and Jean-Yves Le Gall, president of CNES. Le Gall said: "We are extremely satisfied and proud of this memorandum. UAE Space Agency Visits NASA, Seeks US Partnership - Gulf Business. By Aarti Nagraj. 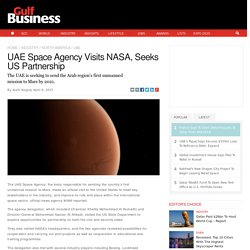 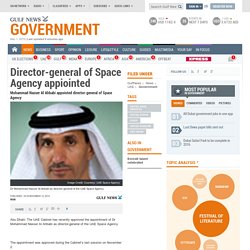 Mars Probe. Indian Spacecraft Captures Its First Photos of Mars. India's first Mars probe has captured its first photos, revealing an early glimpse of the surface and atmosphere of the Red Planet. 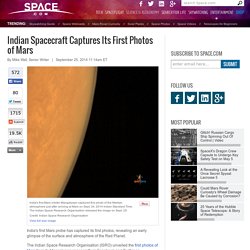 The Indian Space Research Organisation (ISRO) unveiled the first photos of Mars from its Mangalyaan spacecraft via Facebook and Twitter on Wednesday and Thursday (Sept. 24-25), just a day or so after the probe made it to the Red Planet. India’s 1st Mars Mission Celebrates 100 Days and 100 Million Kilometers from Mars Orbit Insertion Firing – Cruising Right behind NASA’s MAVEN. India’s Mars Orbiter Mission (MOM) marked 100 days out from Mars on June 16, 2014 and the Mars Orbit Insertion engine firing when it arrives at the Red Planet on September 24, 2014 after its 10 month interplanetary journey. 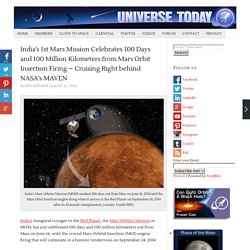 Credit ISRO India’s inaugural voyager to the Red Planet, the Mars Orbiter Mission or MOM, has just celebrated 100 days and 100 million kilometers out from Mars on June 16, until the crucial Mars Orbital Insertion (MOI) engine firing that will culminate in a historic rendezvous on September 24, 2014. MOM is cruising right behind NASA’s MAVEN orbiter which celebrated 100 days out from Mars on Friday the 13th of June. MAVEN arrives about 48 hours ahead of MOM on September 21, 2014. After streaking through space for some ten and a half months, the 1,350 kilogram (2,980 pound) MOM probe will fire its 440 Newton liquid fueled main engine to brake into orbit around the Red Planet on September 24, 2014 – where she will study the atmosphere and sniff for signals of methane. 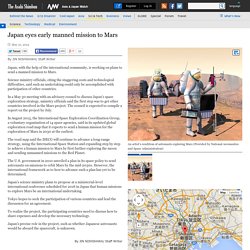 Science ministry officials, citing the staggering costs and technological difficulties, said such an undertaking could only be accomplished with participation of other countries. In a May 30 meeting with an advisory council to discuss Japan's space exploration strategy, ministry officials said the first step was to get other countries involved in the Mars project.

The council is expected to compile a report on the project by July. In August 2013, the International Space Exploration Coordination Group, a voluntary organization of 14 space agencies, said in its updated global exploration road map that it expects to send a human mission for the exploration of Mars in 2030 at the earliest. The U.S. government in 2010 unveiled a plan in its space policy to send astronauts on missions to orbit Mars by the mid-2030s. Iran claims 2nd launch of monkey into space and back. Iran says it has sent a monkey into space for the second time, representing the nation's latest step toward sending humans into space. 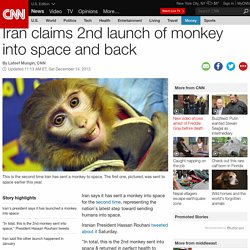 Iranian President Hassan Rouhani tweeted about it Saturday. "In total, this is the 2nd monkey sent into space & returned in perfect health to #Iran. I congratulate the Leader, scientists & the nation," Rouhani said. The launch was part of the nation's national Research Week, Iranian state news agency IRNA said. The monkey's name is Fargam, a combination of two Farsi words "auspicious" and "luck. " Iran made a similar announcement in January, saying then that it had launched the first monkey into space, strapped snugly into a rocket, and returned it safely to Earth. That announcement was met by skepticism by some. U.S. China aims to send rover to Red Planet within six years. China has ambitious plans to touch down on Mars by 2020, likely with a rover, and to collect its own samples from the red planet 10 years after that, a top aerospace scientist has revealed. 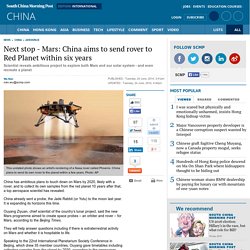 China already sent a probe, the Jade Rabbit (or Yutu) to the moon last year. It is expanding its horizons this time. Ouyang Ziyuan, chief scientist of the country’s lunar project, said the new Mars programme aimed to create space probes – an orbiter and rover – for Mars, according to the Beijing Times. They will help answer questions including if there is extraterrestrial activity on Mars and whether it is hospitable to life. Terraforming Mars. Mars Curiosity - MSL. USA Mars Science Laboratory. Space Exploration. Mars exploration family portrait.