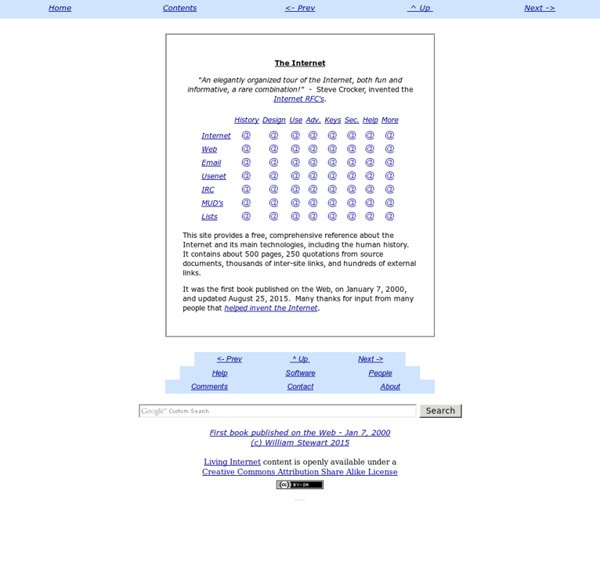 The History and Evolution of Social Media Social media has become an integral part of modern society. There are general social networks with user bases larger than the population of most countries. There are niche sites for virtually every special interest out there. 50 Places You Can Learn to Code (for Free) Online If you’re curious about learning a programming language then you’re in luck: there’s no shortage of resources for learning how to code online. University-level courses, tutorials, cheat sheets, and coding communities all offer excellent ways to pick up a new language, and maybe even a new job, too. Read on, and you’ll discover 50 great places to learn how to code, for free, online. University Many big names in education including MIT and Stanford offer programming courses, absolutely free.

Meet the Man Behind the Map: Washington, D.C.'s and Baltimore's Historical Trains, Subway-Style - Curbed Interviews The remnants of abandoned train lines are still visible to this day, often drawing curiosity from what David Edmondson calls "legacy train nerds." As a railway enthusiast, himself, Edmondson became tired of not knowing where these train lines were or how they connected, deciding to take it into his own hands to map each line in a colorful subway-style map. He describes his maps as "quasi-geographical train service diagram[s]" that are able to show the rails and also the service of each train. By utilizing 1930's railway timetables, he's completed a map of the San Francisco Bay Area's historical trains and is currently working on one that will cover the Washington, D.C. and Baltimore areas. To create these and more maps, Edmondson started a Kickstarter project with a $250 goal that has already been exceeded and is currently reaching $1,000.

July 18, 1992: The First Photo Uploaded to the Web, of CERN’s Parody All-Girl Science Band by Maria Popova Love and science set to song, from quarks to colliders. In 1990, shortly before a CERN physicist subverted gender and science stereotypes by adapting Alice in Wonderland as an allegory in quantum mechanics, a different type of delightful subversion was afoot at the famed European Organization for Nuclear Research, now home to the Large Hadron Collider: Michele Muller, a former British model and actor working as a 3D graphic designer for a virtual reality project at CERN, was dating CERN computer scientist Silvano de Gennaro and found herself frustrated with her boyfriend’s seemingly unending shifts. Rather than fight over it, the two decided to have some fun with the relationship sticking point — Michele set her frustrations to song, asking Silvano to write some music that she would perform at the CERN Hardronic Festival. Oh, and they were actually very, very good.

Five Technologies to Make Sure Your Data Lives Forever They say that on the Internet, nothing ever goes away. This is true, for popular content that’s endlessly shared and remixed. But this kind of viral candy is only the tip of a really big iceberg. Beneath the surface of memes and naked celebrities lurks endless petabytes of data too boring for immortality.

Become a Programmer, Motherfucker If you don't know how to code, then you can learn even if you think you can't. Thousands of people have learned programming from these fine books: Learn Python The Hard Way What The Internet Thinks About - Interactive Infographic What if you saw the Internet’s most-read stories all at once? You would see a picture of what the Internet thinks about – this (click on each story). How do we know all this? The data comes from the largest index of links on the Internet (after Google) by Ahrefs.

love this site. brought back memories of younger days. by ebbead Apr 8

Future tech-ers pay attention to the standards. It will be ammended, just like all constitutions and declarations. Visit W3C and all pearls I or anybody has on civil liberty, electronic liberty, blah blah. you get it or you don't.Repdaddy. by repdaddy Nov 4