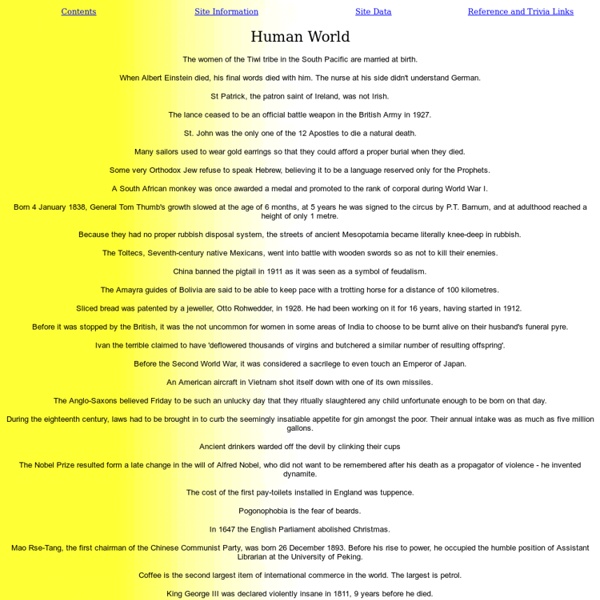 Human World The women of the Tiwi tribe in the South Pacific are married at birth. When Albert Einstein died, his final words died with him. The nurse at his side didn't understand German. St Patrick, the patron saint of Ireland, was not Irish. The lance ceased to be an official battle weapon in the British Army in 1927. St. Many sailors used to wear gold earrings so that they could afford a proper burial when they died. Some very Orthodox Jew refuse to speak Hebrew, believing it to be a language reserved only for the Prophets. A South African monkey was once awarded a medal and promoted to the rank of corporal during World War I. Born 4 January 1838, General Tom Thumb's growth slowed at the age of 6 months, at 5 years he was signed to the circus by P.T. Because they had no proper rubbish disposal system, the streets of ancient Mesopotamia became literally knee-deep in rubbish. The Toltecs, Seventh-century native Mexicans, went into battle with wooden swords so as not to kill their enemies.

Punched Out Over six months, The New York Times examined the life and death of the professional hockey player Derek Boogaard, who rose to fame as one of the sport's most feared fighters before dying at age 28. Originally published in the New York Times in December, 2011. Photo: Marcus Yam for The New York Times: Aaron Boogaard in the apartment he and Derek shared and in which Derek died. Aaron gave his brother a painkiller before he went out that night. 14 fun facts you probably didn’t know Source Source Source Some other swear slangs were 14 Cool And Unusual Aquariums EmailEmail Do you live a stressful life, have high blood pressure and insomnia? Keeping an aquarium may be a good therapy for you! Studies going back as far as the late 80’s have shown that watching those beautiful fish going about their daily business can make you feel calm, reducing stress levels and your blood pressure. Although researchers have shown that the greater reduction in blood pressure occurred when there were fish in the tank, vs pleasingly decorated, but fishless, tanks – having a cool aquarium can at least make your friends jealous! [1 2 3]

Things People Said: Courtroom Quotations The following quotations are taken from official court records across the nation, showing how funny and embarrassing it is that recorders operate at all times in courts of law, so that even the slightest inadvertence is preserved for posterity. Lawyer: "Was that the same nose you broke as a child?"Witness: "I only have one, you know." What would happen if I drilled a tunnel through the center of th" Want to really get away from it all? The farthest you can travel from home (and still remain on Earth) is about 7,900 miles (12,700 kilometers) straight down, but you'll have to journey the long way round to get there: 12,450 miles (20,036 kilometers) over land and sea. Why not take a shortcut, straight down? You can get there in about 42 minutes -- that's short enough for a long lunch, assuming you can avoid Mole Men, prehistoric reptiles and underworld denizens en route. Granted, most Americans would end up in the Indian Ocean, but Chileans could dine out on authentic Chinese, and Kiwis could tuck into Spanish tapas for tea [sources: NOVA; Shegelski].

The shady origins of five popular board games (Credit: Alex Wong/Getty Images News) Quaker extortionists and Monopoly? The Civil War and The Game of Life? We usually associate board gaming with family time, but several of the most popular games out there have some not-so-family-friendly origins. So if you're looking to spark some interesting conversations next time you gather 'round the table for an evening of dice and fake money, here are a few of the lesser known tales of history's biggest board games. Monopoly and the Quakers

The Most Amazing Facts on the Internet Facetious and abstemious are the only words that contain all the vowels in the correct order. "Adcomsubordcomphibspac" is the longest acronym. It is a Navy term standing for Administrative Command, Amphibious Forces, Pacific Fleet Subordinate Command. "Almost" is the longest commonly used word in the English language with all the letters in alphabetical order. Collected Quotes from Albert Einstein [Note: This list of Einstein quotes was being forwarded around the Internet in e-mail, so I decided to put it on my web page. I'm afraid I can't vouch for its authenticity, tell you where it came from, who compiled the list, who Kevin Harris is, or anything like that. Still, the quotes are interesting and enlightening.] "Any intelligent fool can make things bigger, more complex, and more violent.

wow Now just up a few steps. (They are on the left in the picture) Gets a little steeper here - so put your toes in the holes. A few more steps to go. Finally in sight, the Teahouse! Click here to Watch the Cliff Hanger PPS! Sinquefield Cup: One of the most amazing feats in chess history just happened, and no one noticed. Photo by Lennart Ootes Before any of the six entrants in the 2014 Sinquefield Cup had nudged a white pawn to e4, they’d already been hailed as the strongest collection of chess talent ever assembled. The tournament, held in St. Louis, featured the top three players in the game. The weakest competitor in the field was the ninth best chess player on the planet.

True Facts Facts - interesting, provocative, well-seasoned One out of ten children in Europe are conceived on an IKEA bed. Antarctica is the only continent without reptiles or snakes. TM): Great quotes by comedians Great quotes by comedians ----- Begin NetScrap(TM) ----- Great quotes by comedians "If you ever see me getting beaten by the police, put down the video camera and come help me." --Bobcat Goldthwait "I've been doing the Fonda workout: the Peter Fonda workout. That's where I wake up, take a hit of acid, smoke a joint, and run to my sister's house and ask her for money." --Kevin Meaney "My mom said she learned how to swim. Someone took her out in the lake and threw her off the boat. Seven Speaking Tips That Beat “Pretend Your Audience Is Naked" Aggh. Everyone showed up clothed! Once upon a time, I suffered from glossophobia. This affliction touches billions.