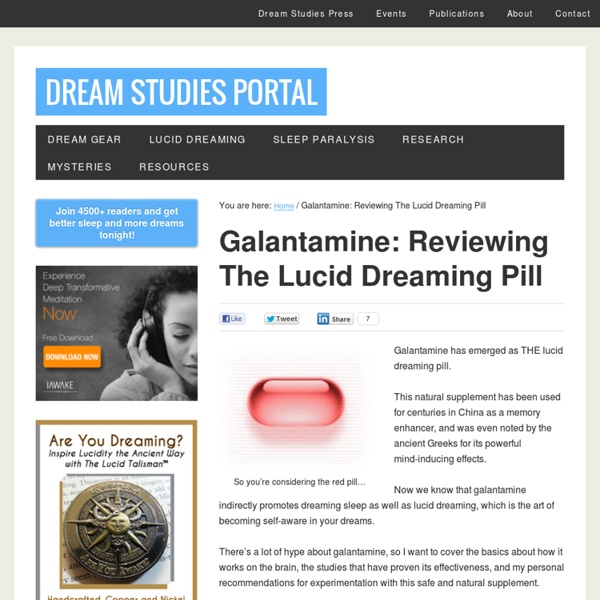 So you’re considering the red pill… Galantamine has emerged as THE lucid dreaming pill. This natural supplement has been used for centuries in China as a memory enhancer, and was even noted by the ancient Greeks for its powerful mind-inducing effects. Now we know that galantamine indirectly promotes dreaming sleep as well as lucid dreaming, which is the art of becoming self-aware in your dreams. There’s a lot of hype about galantamine, so I want to cover the basics about how it works on the brain, the studies that have proven its effectiveness, and my personal recommendations for experimentation with this safe and natural supplement. I also want to be brutally honest about some of the mild psychological and physical side effects as well. Want to cut to the chase? Galantamine & Memory red spider lily (Lycoris radiata) Galantamine is found in the natural world in many plant sources, including the common daffodil (Narcissus pseudonarcissus). How Galantamine Works On your Brain Laberge’s results?

33 Mistakes Men Make While Having Sex (INFOGRAPHIC) Maybe you don’t know but women can handle your soft side. When it comes to personality you can be as soft as bloody filet mignon. But when we talk about bed time, your penis needs to be hard. Sleep Sleeping is associated with a state of muscle relaxation and limited perception of environmental stimuli. The purposes and mechanisms of sleep are only partially clear and the subject of substantial ongoing research.[2] Sleep is sometimes thought to help conserve energy, though this theory is not fully adequate as it only decreases metabolism by about 5–10%.[3][4] Additionally it is observed that mammals require sleep even during the hypometabolic state of hibernation, in which circumstance it is actually a net loss of energy as the animal returns from hypothermia to euthermia in order to sleep.[5] Humans may suffer from a number of sleep disorders. These include dyssomnias (such as; insomnia, hypersomnia, and sleep apnea) and parasomnias (such as sleepwalking and REM behavior disorder; and the circadian rhythm sleep disorders). Physiology[edit]

Lucid Dreaming Pill Chemical Makeup Galantamine (Nivalin, Razadyne, Razadyne ER, Reminyl, Lycoremine) is used for the treatment of mild to moderate Alzheimer's disease and various other memory impairments, in particular those of vascular origin. It is an alkaloid that is obtained synthetically or from the bulbs and flowers of Galanthus caucasicus (Caucasian snowdrop, Voronov's snowdrop), Galanthus woronowii (Amaryllidaceae) and related genera like Narcissus (daffodil), Leucojum aestivum (snowflake), and Lycoris including Lycoris radiata (red spider lily).[1] Studies of usage in modern medicine began in the Soviet Union in the 1950s. The active ingredient was extracted, identified, and studied, in particular in relation to its acetylcholinesterase (AChE)-inhibiting properties. The bulk of the work was carried out by Soviet pharmacologists M.

Basic Breath Meditation Instructions The technique I'll be teaching is breath meditation. It's a good topic no matter what your religious background. As my teacher once said, the breath doesn't belong to Buddhism or Christianity or anyone at all. It's common property that anyone can meditate on. Stanislav Grof Biography[edit] As founding president of the International Transpersonal Association (founded in 1977), he went on to become distinguished adjunct faculty member of the Department of Philosophy, Cosmology, and Consciousness at the California Institute of Integral Studies, a position he remains in today. Grof was featured in the film Entheogen: Awakening the Divine Within, a 2006 documentary about rediscovering an enchanted cosmos in the modern world.[3] He was also featured in five other documentaries.[4] Teachings[edit] Grof distinguishes between two modes of consciousness: the hylotropic and the holotropic.[5] The hylotropic[6] refers to "the normal, everyday experience of consensus reality

Powers Mandrake The harvest The root of the mandrake resembles a phallus or a human torso, and for this reason was believed to have occult powers. Many weird superstitions collected round the Mandrake root. As early as 93 BC the historian Flavius Josephus described the process of collecting the mandrake, stories of which were embellished over the years. The mandrake was fabled to grow under the gallows of murderers and its anthropological shape evidently was responsible for the superstition that it shrieked when it was uprooted. Alternate Sleep Cycles Most people only think that there is one way to sleep: Go to sleep at night for 6-8 hours, wake up in the morning, stay awake for 16-18 hours and then repeat. Actually, that is called a monophasic sleep cycle, which is only 1 of 5 major sleep cycles that have been used successfully throughout history. The other 4 are considered polyphasic sleep cycles due to the multiple number of naps they require each day. How is this possible?

What is a Dream Catcher? Dream catchers are arts and crafts of the Native American people. The original web dream catcher of the Ojibwa was intended to teach natural wisdom. Nature is a profound teacher. Dream catchers of twigs, sinew, and feathers have been woven since ancient times by Ojibwa people. Mind over matter: Study shows we consciously exert control over individual neurons By Mark WheelerOctober 27, 2010Category: Health Sciences, Research Every day our brains are flooded by stimulation — sounds, sights and smells. At the same time, we are constantly engaged in an inner dialogue, ruminating about the past, musing about the future. Somehow the brain filters all this input instantly, selecting some things for long- or short-term storage, discarding others and focusing in on what's most important at any given instant. How this competition is resolved across multiple sensory and cognitive regions in the brain is not known; nor is it clear how internal thoughts and attention decide what wins in this continual contest of stimulation.

The Salvia divinorum FAQ Level - 2 "A stands for ALTERED perception." Colors and textures are paid attention to. Appreciation of music may be enhanced.