Infant Sleep: Expectations and Reality – Growing Families. The Great Sleep Obsession (The Problem of Modern Day Life versus the Primitive Infant) Sleep No other word can generate such an emotive response in so many parents of young children. 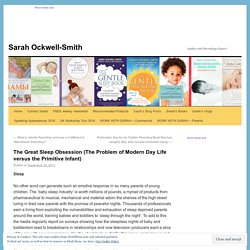 The ‘baby sleep industry’ is worth millions of pounds, a myriad of products from pharmaceutical to musical, mechanical and material adorn the shelves of the high street luring in tired new parents with the promise of peaceful nights. Thousands of professionals earn a living from exploiting the vulnerabilities and exhaustion of sleep deprived parents around the world, training babies and toddlers to ‘sleep through the night’. To add to this the media regularly report on surveys showing how the sleepless nights of baby and toddlerdom lead to breakdowns in relationships and now television producers want a slice of the pie with new programmes, like the shockingly awful Bedtime Live, springing up and with no doubt more to come.

Sleep is a big issue in our modern day society and an enticing money-maker. Currently, as a society we are not supportive of young families. Sarah Ockwell-Smith Like this:

BF / formula. SIDS. Sleep training. Don't Try to Teach Your Baby to 'Self Settle' to Sleep!  Toddlers All Sleep Through the Night - Don't They?  Parents expect their small babies to wake at night frequently. 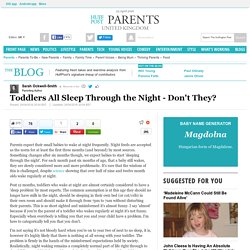 Night feeds are accepted as the norm for at least the first three months (and beyond) by most sources. Something changes after six months though, we expect babies to start 'sleeping through the night'. For each month past six months of age, that a baby still wakes, they are slowly considered more and more problematic. It's rare that the wisdom of this is challenged, despite science showing that over half of nine and twelve month olds wake regularly at night. Elizabeth.Pantley.The.No.Cry.Sleep.Solution 1.

Breastfeeding to Sleep and Other Comfort Nursing. Many mothers feel guilty for breastfeeding their baby for comfort or as they drift off to sleep. 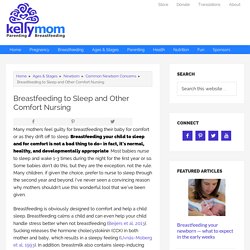 Breastfeeding your child to sleep and for comfort is not a bad thing to do– in fact, it’s normal, healthy, and developmentally appropriate. Most babies nurse to sleep and wake 1-3 times during the night for the first year or so. Some babies don’t do this, but they are the exception, not the rule. Many children, if given the choice, prefer to nurse to sleep through the second year and beyond. I’ve never seen a convincing reason why mothers shouldn’t use this wonderful tool that we’ve been given. The WIO (Wait It Out) Method of Sleep Training. (Please read this first: I Am Not A Better Mother Than You.) 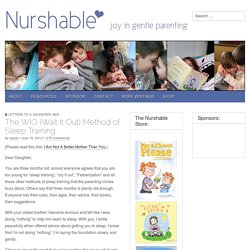 Dear Daughter, You are three months old, almost everyone agrees that you are too young for “sleep training”, “cry it out”, “Ferberization” and all those other methods of sleep training that the parenting circles buzz about. Others say that three months is plenty old enough. Everyone has their rules, their ages, their advice, their books, their suggestions.

Self-soothing. Possibly the biggest lie ever foisted on parents. It figures it would be the latest propaganda about baby sleep that would wake me from my blogging slumber. 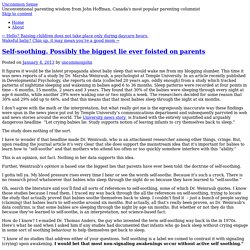 This time it was news reports of a study by Dr. Marsha Weinraub, a psychologist at Temple University. In an article recently published in Developmental Psychology, she reports on data (collected 20 years ago, oddly enough) from a study which tracked patterns of nighttime sleeping and wakening in babies aged 6 to 36 months. Sleep patterns were recorded at four points in time – 6 months, 15 months, 2 years and 3 years.

They found that 30% of the babies were sleeping through every night at age 6 months, while another 29% were waking one or two nights a week. I don’t agree with the math or the interpretation, but what really got me is the egregiously inaccurate way these findings were spun in the news piece put out by Temple University’s communications department and subsequently parroted in web and news stories around the world. The study does nothing of the sort. Self Settling – What Really Happens When You Teach a Baby to Self Soothe to Sleep. So many, parents and experts alike, advocate the idea of “teaching a baby to self settle” or “self soothe”. 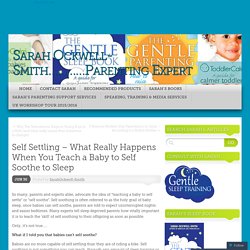 Researchers propose 'breastsleeping' as a new word and concept. As far as titles in academic journals go, it’s quite the attention-getter. 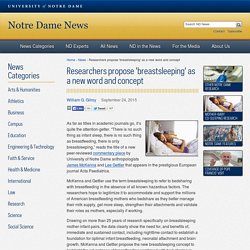 “There is no such thing as infant sleep, there is no such thing as breastfeeding, there is only breastsleeping,” reads the title of a new peer-reviewed commentary piece by University of Notre Dame anthropologists James McKenna and Lee Gettler that appears in the prestigious European journal Acta Paediatrica. McKenna and Gettler use the term breastsleeping to refer to bedsharing with breastfeeding in the absence of all known hazardous factors. This Is Why Your Baby Doesn't Sleep Through The Night. Nighttime Breastfeeding - 8 Reasons Why It's So Important. So, you’re home with your new baby. 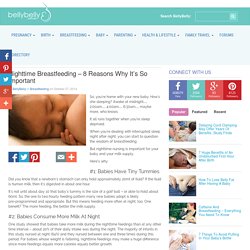