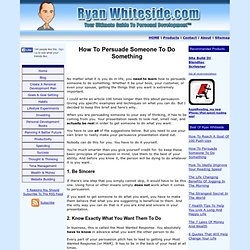 Whether it be your boss, your customer, or even your spouse, getting the things that you want is extremely important. I could write an article 100 times longer than this about persuasion. Giving you specific examples and techniques on what you can do. But I decided to keep this brief and here’s why… When you are persuading someone to your way of thinking, it has to be coming from you. You have to use all of the suggestions below. Nobody can do this for you. You’re much smarter than you give yourself credit for. 1. If there’s one step that you simply cannot skip, it would have to be this one. If you want to get someone to do what you want, you have to make them believe that what you are suggesting is beneficial to them. 2. In business, this is called the Most Wanted Response. Every part of your persuasion pitch has to lead to getting your Most Wanted Response (or MWR). 3. 4. 5.

Get Anyone To Do Anything (9780743522854): David J. Lieberman. The 48 Laws of Power - Robert Greene. Law 1 Never Outshine the Master Always make those above you feel comfortably superior. 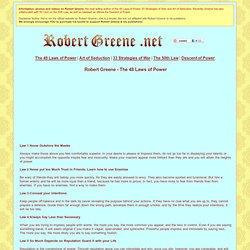 In your desire to please or impress them, do not go too far in displaying your talents or you might accomplish the opposite inspire fear and insecurity. Make your masters appear more brilliant than they are and you will attain the heights of power. Law 2 Never put too Much Trust in Friends, Learn how to use Enemies Be wary of friends-they will betray you more quickly, for they are easily aroused to envy.

They also become spoiled and tyrannical. Law 3 Conceal your Intentions Keep people off-balance and in the dark by never revealing the purpose behind your actions. Law 4 Always Say Less than Necessary When you are trying to impress people with words, the more you say, the more common you appear, and the less in control. Law 5 So Much Depends on Reputation Guard it with your Life Reputation is the cornerstone of power. The 48 Laws of Power.

Background[edit] Greene initially formulated some of the ideas in The 48 Laws of Power while working as a writer in Hollywood and concluding that today's power elite shared similar traits with powerful figures throughout history.[5] In 1995, Greene worked as a writer at Fabrica, an art and media school, and met a book packager named Joost Elffers.[4][8] Greene pitched a book about power to Elffers and six months later, Elffers requested that Greene write a treatment.[4] Although Greene was unhappy in his current job, he was comfortable and saw the time needed to write a proper book proposal as too risky.[10] However, at the time Greene was rereading his favorite biography about Julius Caesar and took inspiration from Caesar's decision to cross the Rubicon River and fight Pompey, thus inciting the Great Roman Civil War.[10] Greene would follow Caesar's example and write the treatment, which later became The 48 Laws of Power.[10] He would note this as the turning point of his life.[10] 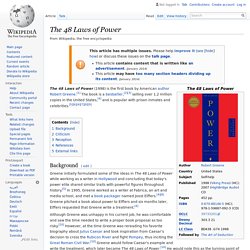