Timeline of History - 20th Century at a Glance 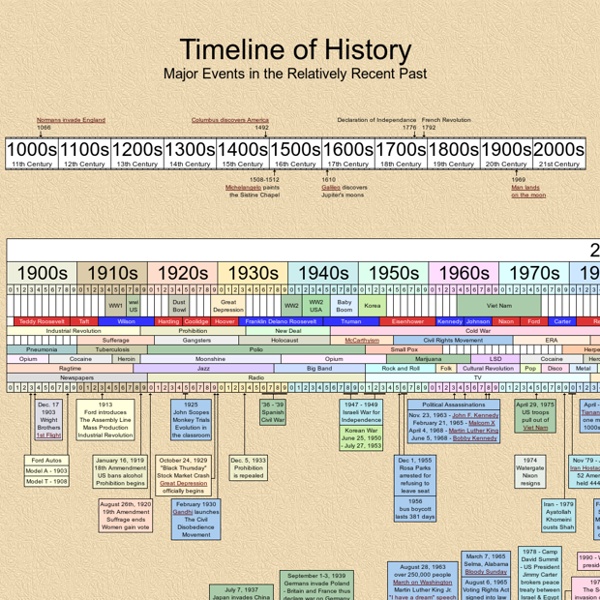 Institute for the Study of Globalization and Covert Politics - About - Joel van der Reijden Purpose The Institute for the Study of Globalization and Covert Politics is a project that ran from 2004 to 2013. It was a surprisingly successful attempt to analyze the various establishments of the western world and to see how they interact with both each other and national governments. ISGP has been a unique project for some of the following reasons: It put together a list of about 1,000 important privately-funded non-government institutes (NGOs) and the key persons who form an international "permanent establishment". In the recent past not even a dozen of these organizations were mentioned on one site or in one book, let alone studied to any significant degree. It published the first detailed articles on the Pilgrims Society and the 1001 Club, based on never before seen membership lists of both groups.

NYPD: Muslim spying led to no leads, terror cases By ADAM GOLDMAN and MATT APUZZO Associated Press Posted: 08/20/2012 11:47:54 PM PDT0 Comments|Updated: about a year ago NEW YORK—In more than six years of spying on Muslim neighborhoods, eavesdropping on conversations and cataloguing mosques, the New York Police Department's secret Demographics Unit never generated a lead or triggered a terrorism investigation, the department acknowledged in court testimony unsealed late Monday. The Demographics Unit is at the heart of a police spying program, built with help from the CIA, which assembled databases on where Muslims lived, shopped, worked and prayed.

30+ Crazy Photographers Who Will Do ANYTHING For The Perfect Shot Getting the angle and perspective for a photo just right can sometimes be very tricky, but these crazy photographers don't mind – when it comes to taking the perfect shot, they will do whatever it takes. The acts of devotion to their craft that some of the world's best photographers perform can be truly outstanding. Wildlife photographers have spent weeks camped out in the wild, allowing animals to get accustomed to their presence so that they can get the rare or intimate glimpses at their lives that others only dream of.

Eight Norwegian Photographers You Need to Follow The Norwegian Journal of Photography (NJP) has released the latest issue of its biennial survey of the Scandinavian country’s contemporary documentary photography scene, showcasing the work of eight photographers. The publishers — photographers and photo editors Rune Eraker, Laara Matsen and Espen Rasmussen — combed through close to 100 applications and submissions to arrive at its final list of eight photographers, using funding from the Fritt Ord Foundation, a non-profit devoted to freedom of expression, to produce the high-quality book. “We look for strong voices,” Espen tells TIME, “and we also look for photographers who challenge the term ‘documentary photography’. Do they have a style, something to tell us, do they surprise us or challenge us?

See the World's Most Iconic Places Transformed by Whimsical Paper Cut Outs Big Ben, London Arc de Triomphe, Paris London-based photographer Rich McCor understands that his city is a magical one, but like all of us, it’s easy to become tone-deaf to the quirks and nuances of a place simply by way of living there for a long period of time. That all changed when he saw Big Ben as no photographer had seen it before, not as a looming landmark but as his own personal wristwatch. From Audrey Hepburn to Lady Gaga: Photographer Spends 25 Years Snapping Selfies with the World's Biggest Celebrities Audrey Hepburn, 1991 Lady Gaga, 2012 Over the course of twenty five years, beginning in 1989 when he was just fifteen, Australian photographer Richard Simpkin collected literally thousands self-portrait snapshots with international celebrities.

Best Female Photographers On Instagram Warning: There isn't any smooshed-up avocado on toast in sight. Sure, you enjoy seeing your friend's photo of her breakfast, and you double tapped that mate-of-a-mate's baby pic because, well, it would be rude not to. And following Blake Lively is just a given because y'know: it's Blake Lively.

iPhone Photography Awards Winners Revealed The iPhone Photography Awards, an international photography contest that fosters iPhone and mobile photography, has announced the winners of its eighth annual competition, with Michał Koralewski of Poland coming on top, and David Craik of the United Kingdom and American Yvonne Lu following the second and third spots respectively. “It’s an incredible surprise for me to be given this award,” Koralewski tells TIME. “I’ve taken part in the IPPAwards contests for three years, and this is the first time I won something more than an honorable mention.” Reviewing thousands of entries from all over the world, the jury selected the top three, as well as three winners in each of the 19 categories, which included travel, architecture, food and portrait.

Follow these photographers on Instagram to see the Ukraine conflict unfiltered Photojournalist Anastasia Vlasova has documented the conflict breaking her country apart since she was just seventeen. Here’s who she follows on Instagram. Ukrainian photographer Anastasia Vlasova cut her teeth on the frontlines, covering her first protest when she was just seventeen. At twenty-two, she’s witnessed a revolution and the grief of war.

Casting Herself i, Photographer by Degas, Picasso, Rembrandt and More After Vermeer After Magritte Stages is the title of a self-portrait project by American photographer Laura Hofstadter. After experimenting with a large format camera and discovering a thrill in re-creating classical paintings using simple household props, Hofstadter embarked on this photographic narrative to illustrate the varying transformative stages of life that we pass through universally, as well as those of loss and aging. The project also on a deeper level examines the artist’s own experience battling cancer and the effects the treatment has bestowed upon her body.