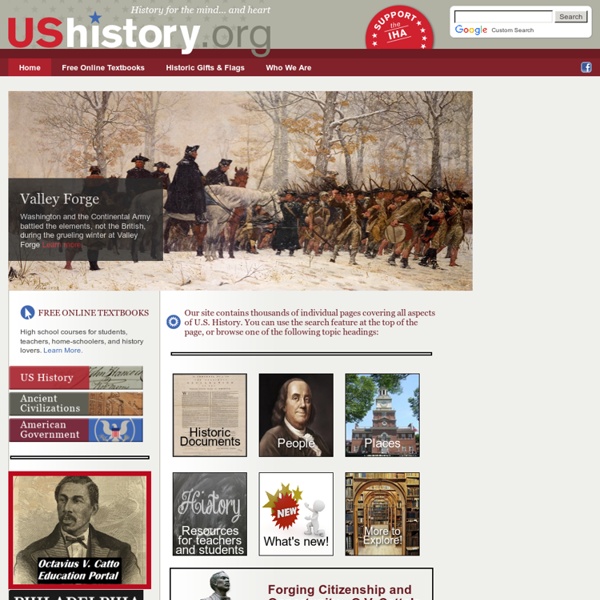 U.S: Geography, states, landmarks, maps, cities, population, laws, speeches U.S. States, Cities, History, Maps Year by Year: 1900–2015 Enter a year: Special Features American Slave Narratives From 1936 to 1938, over 2,300 former slaves from across the American South were interviewed by writers and journalists under the aegis of the Works Progress Administration. These former slaves, most born in the last years of the slave regime or during the Civil War, provided first-hand accounts of their experiences on plantations, in cities, and on small farms. Their narratives remain a peerless resource for understanding the lives of America's four million slaves. What makes the WPA narratives so rich is that they capture the very voices of American slavery, revealing the texture of life as it was experienced and remembered. Each narrative taken alone offers a fragmentary, microcosmic representation of slave life. Read together, they offer a sweeping composite view of slavery in North America, allowing us to explore some of the most compelling themes of nineteenth-century slavery, including labor, resistance and flight, family life, relations with masters, and religious belief.

The History of Native American Religion Native American religion is hard to explain. This is because there were very many tribes the religious principles were passed down verbally. Many of these groups had their own beliefs though many of them were similar in the major aspects. Native American religion tends to focus around nature. The landscape, animals, plants, and other environmental elements play a major role in the religion of Native Americans. Many of the legends passed down were an attempt to explain events that occurred in nature. Cuban missile crisis The Cuban missile crisis — known as the October Crisis or The Missile Scare (Spanish: Crisis de octubre) in Cuba and the Caribbean Crisis (Russian: Карибский кризис, tr. Karibskiy krizis) in the former USSR — was a 13-day confrontation in October 1962 between the Soviet Union and Cuba on one side and the United States on the other side. The crisis is generally regarded as the moment in which the Cold War came closest to turning into a nuclear conflict[1] and is also the first documented instance of mutual assured destruction (MAD) being discussed as a determining factor in a major international arms agreement.[2][3]

Resources High School Lessons (article PDF) From Social EducationThe Technology of Unequal Rights for Women: Patent Drawings of a Voting Machine Middle Level Lessons (whole-issue PDF) From Middle Level LearningRevolutionary Women: Portraits of Life in the 13 Colonies Elementary Lessons (article PDF) From Social Studies and the Young LearnerJane Addams: Raising Up the Poor Get access to ALL of the lessons and articles in Social Education, Middle Level Learning, and Social Studies and the Young Learner by becoming a member of NCSS. Then search the Publications Archive with Custom Google. American History in VOA Special English There are 246 fifteen-minute programs and 5 four-minute programs. That is about 62 hours of listening. About 'The Making of a Nation' Radio Program

Project-based learning, the USA and Authentic Video in the EFL classroom The Globe Trekker/Pilot Guides video collection is a treasure trove for any English teacher. It encompasses extensive material from every corner of the world, and especially English-speaking countries are lavished with attention. Australia, Canada, Scotland, Wales, Ireland, England – you name it. Even individual cities are endowed with an approx. 50-minute complete video of its own, like London, New York City, San Francisco, Los Angeles, New Orleans to name but a few.