Trump declares economic war on Cuba. The Trump administration has declared the most severe new sanctions against Cuba since President John F. 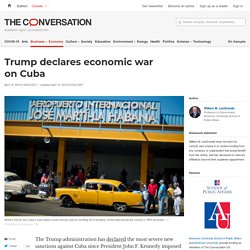 Kennedy imposed an economic embargo banning all trade with the communist island in 1962. Speaking in Miami on April 17, the anniversary of the United States’ failed 1961 invasion of Cuba’s Bay of Pigs, national security adviser John Bolton announced the end of virtually all non-family travel to Cuba and placed new limits on the money Cuban Americans can send to family on the island. He also said the U.S. will now implement a 23-year-old law aimed at blocking both U.S. and foreign investment in Cuba, first passed by Congress in 1996 as part of a broader sanctions package against Cuba but put on hold because it triggered immense opposition among U.S. allies. The harsh new sanctions reverse “the disastrous Obama-era policies, and finally end the glamorization of socialism and communism,” Bolton said. (19) Les infos clés sur Cuba, le cauchemar américain. From 'I Love Lucy' to pop music, Cuba's influence on America runs deep. Now that the decades-long trade embargo between the U.S. and Cuba looks to be a thing of the past, Americans may soon be partying with Cuban goods like it’s 1959. 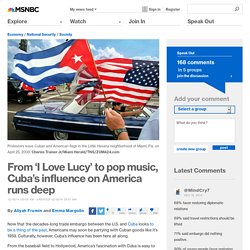 Culturally, however, Cuba’s influence has been here all along. From the baseball field to Hollywood, America’s fascination with Cuba is easy to spot. Even among the U.S.’s most culturally oblivious, few would offer blank stares at the mention of a Cuban sandwich, Cuban cigars, Jose Conseco, Gloria Estefan, or even the fictional Ricky Ricardo’s famous line, “Lucy, I’m home!” RELATED: Human rights groups hail restoration of US-Cuban ties Part of Americans’ interest in all things Cuba has to do with the fact that it’s been off limits. American History USA. Dan Bryan, May 15 2012 Cuban storefronts in downtown Miami, 1978. 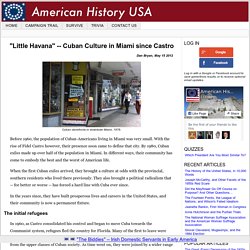 Before 1960, the population of Cuban-Americans living in Miami was very small. With the rise of Fidel Castro however, their presence soon came to define that city. Cuban Americans - History, Slavery, Revolution, Modern era, Significant immigration waves. Overview Cuba is an island nation located on the northern rim of the Caribbean Sea. 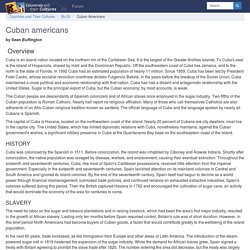 It is the largest of the Greater Antilles islands. To Cuba's east is the island of Hispaniola, shared by Haiti and the Dominican Republic. Timeline: US-Cuba relations. Relations between the US and Cuba have long been intertwined. 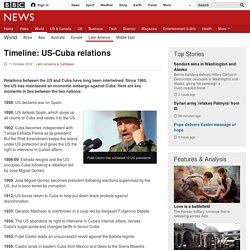 Since 1960, the US has maintained an economic embargo against Cuba. Here are key moments in ties between the two nations: 1898: US declares war on Spain. US & Cuba: A turbulent relationship. President Obama: A new day in U.S.-Cuba relations. Timeline: 50 Years Of Cuba-US Relations In Five Minutes. How do new U.S.-Cuba relations impact you?