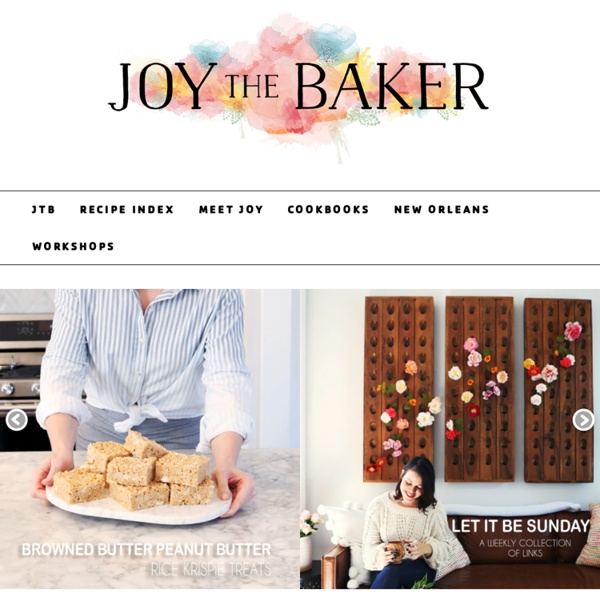 I feel like I’m grasping tight to the things around me these days. I’m probably the first to shrug off the change of season, the change of moving cities, and the change of traveling a ton as no big deal…. but it all adds up to matter and I have to admit I feel a little crazy in the brain. This season I’ve started a new workout routine. Since I’ve moved away from my beloved SoulCycle in California, I’ve started practicing Bikram Yoga in New Orleans. I’m terrible. Who knew bending could be so dang challenging?

Places 6 Places To Eat Incredibly Well In Saint Thomas Where to eat on the beautiful U.S. Virgin Island Nov 19, 2014 2:00 pm Sparkling, pristine beaches? Baking 21 Apr Lemon Blackberry Mini Tarts Baking | Russell van Kraayenburg Fresh, sweet, and tangy. friday fun stuff Here in the new england we've had a lot of rain and cloudy days. Starts to take it toll on one's sanity. On the horizon though summer is right around the corner--which I hope means more sunny days. Other signs of spring here on cape cod mean the swans have had their babies. I was lucky enough to get these photos as both the mommy and daddy are fiercely protective.

Cook Your Dream There's nothing better than real home prepared food. Even the simplest dish, when prepared with good quality fresh local and seasonal ingredients, can taste like a dream. That being said, all food taste best when enjoyed in the company of friends and family. Cooking With Seeds - Cardamom Seeds Am here with this month's seeds for cooking with seeds event, after going through many seeds my final choice went for cardamom seeds...Cardamom or cardamom seeds is a popular spice used in India and in Middle East..Cardamom seeds are referred to as the Queen of spices, apart from its aromatic fragrance used for flavouring foods, cardamom also many healthy benefits for digestive system in aroma therapy..Caradmom seeds or cloves are used as versatile spice for making out sweet dishes or many spicy dishes also can be grounded into powder with their seeds to spice out many dishes.. You need to do: 1)Cook anything with green or black cardamom seeds, both vegetarian and non vegetarian dishes are accepted from today to 5th May 2010..

Double Dipped Apple Doughnuts Given the choice between being home and not being home… I’m the girl that always chooses home. Brooklyn is amazing. San Francisco is delicious. Arroz con Pollo - Traditional Mexican Recipe Cinco de Mayo is this weekend– the 5th of May– a date observed in the United States as a celebration of Mexican heritage and pride. It’s a common misconception that Cinco de Mayo is Mexican Independence Day– it’s not. Mexico’s national Independence Day is celebrated on September 16. Cinco de Mayo commemorates the Mexican army’s victory over France at the Battle of Puebla on May 5, 1862. Vastly outnumbered and up against the very strong and better-equipped French army, 4,000 Mexican soldiers defeated 8,000 French soldiers at Puebla. It marks the last time in history that a European military force invaded a country in the Americas.

| Recipes from a Young Lawyer Blondie Layer Cake with White Chocolate Icing Caitlin celebrated her birthday last week. And in preparation of the big day, I scanned my collection of recipes and cookbooks, searching for the perfect layer cake. Last year I made her the pumpkin crepe cake. Sunday Roast Recipe This has to be my ultimate Sunday lunch. It’s a special alternative to your traditional roast beef dinner. I think part of the brilliance of this meal lies in confidently slicing up the component parts of the rib roast in a different way. This encourages people to think about the individual cuts of meat.

Baba au rhum I can't actually remember the first time my mom made Baba au rhum. But somewhere in my teenage years, it became a yearly tradition and she wowed family and friends (and got them tipsy too!) with this recipe. How to Make: Homemade Greek Yogurt - Teaspoon of Spice During my years of grad school in Boston, I lived with a flat mate, Amy, who cooked a little but mainly lived on canned beans, noodles, jarred tomato sauce and an occasional piece of fish cooked in aluminum foil. So I almost dropped the phone the other day when I was chatting with Amy and she nonchalantly mentioned that she now makes homemade yogurt weekly. I’ve been seeing a lot of the homemade yogurt recipes on Pinterest lately, but clearly if Amy is making it “weekly,” and I NEVER have, I am way, way behind the times. So I hopped right to it. Below are my reviews of two different recipes.

Homemade Hot Sauce! Some of us are hot sauce people. I hear the other some of us say that it “takes over” and “burns” and all that nonsense. Clearly, I am hot sauce person. It’s actually rather disconcerting how much so sometimes. Sriracha on my salads disconcerting. But I know I’m not alone in this.