American History from Revolution to Reconstruction and beyond 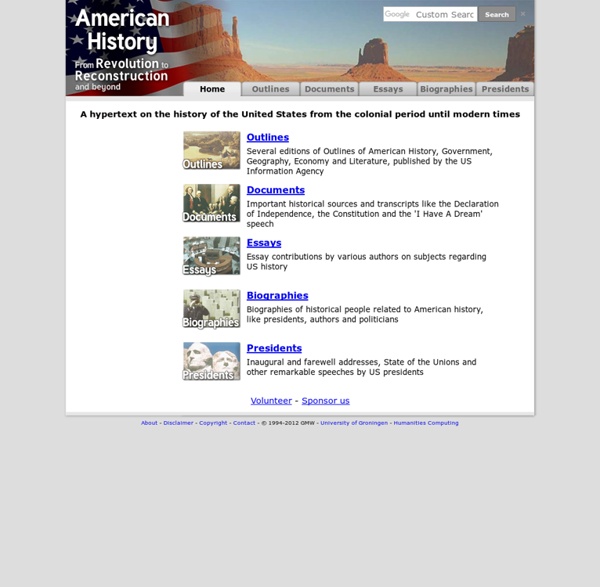 Outlines Several editions of Outlines of American History, Government, Geography, Economy and Literature, published by the US Information Agency Documents Important historical sources and transcripts like the Declaration of Independence, the Constitution and the 'I Have A Dream' speech Essays Essay contributions by various authors on subjects regarding US history Biographies Biographies of historical people related to American history, like presidents, authors and politicians Presidents Inaugural and farewell addresses, State of the Unions and other remarkable speeches by US presidents

Internet History Sourcebooks: Russia sources Russian Revolution See Main Page for a guide to all contents of all sections. Contents The Tsarist State Russian Revolution The Development of the Opposition Lenin 1905 1905 Party Programs 1917 Bolshevik Rule to 1924 Stalinism The Tsarist State Count von Moltke: The Coronation of Tsar Alexander II, 1855 [At this Site] Alexander II, The Emancipation Manifesto, March 3 1861 [new style][At SHU] Théophile Gautier: The Races on the Neva River, 1870 [At this Site] Mary Antin: A Little Jewish Girl in the Russian Pale, 1890 [At this Site] Prince Ukhtomskii: Russia's Imperial Destiny, 1891 [At this Site] Sergei Witte, On the tasks for economic policy, 1900 [At Durham] Commander Vladimir Semenoff: Coaling at Sea, 1905 [At this Site] The adventures of a Russian ship on its way to the Russo-Japanese war.

Revelations from the Russian Archives June 15–July 16, 1992 This exhibition is important for what it represents, what it contains, and what it suggests. It represents a new Russia, willing and anxious under its first democratically elected president, Boris Yeltsin, to affirm the core democratic value of open access to information. Shortly after defeating the attempted coup of August 1991, a group from the victorious democratic resistance led by the chief archivist of Russia, Rudolph Pikhoia, took over the previously top secret archives of the Central Committee of the Communist Party and began the process of both consolidating democratic control over all archives in Russia and attempting to make them available for the first time for public study. This exhibit, which will later be shown in Moscow, is a milestone in this process—the first public display of the hitherto highly secret internal record of Soviet Communist rule.

Patriot Day is celebrated today on the anniversary of the terrorist attacks of 2001. Grades 3 – 5 | Lesson Plan | Standard Lesson Wartime Poetry: Working With Similes Students analyze a photograph, brainstorm words to describe the characters' senses and feelings, work in pairs to describe a character's experience, and create a poem using their ideas and similes. Grades 6 – 8 | Lesson Plan | Standard Lesson Heroes Around Us Students select, read about, and report on a hero and then identify how their hero matches certain criteria and characteristics.

American History in VOA Special English There are 246 fifteen-minute programs and 5 four-minute programs. That is about 62 hours of listening. About 'The Making of a Nation' Radio Program Introduction and Overview of 'The Making of a Nation' (You may skip this one.) 1400s-1500s American Slave Narratives From 1936 to 1938, over 2,300 former slaves from across the American South were interviewed by writers and journalists under the aegis of the Works Progress Administration. These former slaves, most born in the last years of the slave regime or during the Civil War, provided first-hand accounts of their experiences on plantations, in cities, and on small farms. Their narratives remain a peerless resource for understanding the lives of America's four million slaves. What makes the WPA narratives so rich is that they capture the very voices of American slavery, revealing the texture of life as it was experienced and remembered.

Russian Revolution: Ten propaganda posters from 1917 The Russian Revolution was a time of great upheaval but also great creativity. As events take place to mark the 100th anniversary of the uprising, here are 10 classic images that rallied the masses in 1917. 'Loan of Freedom' Image copyright sovrhistory.ru US History Websites with the Common Core Forty-five states have implemented the Common Core State Standards in ELA and Mathematics for every subject. These standards are not intended to drive history and other subjects away from the curriculum, but they are designed to encourage our students to be critical readers who can apply the knowledge they learned. These standards are intended to engage students in the history curriculum and teach them skills needed to be successful. The websites listed below are useful to supplement the curriculum and teach students the skills needed to be successful 21st century learners. Under Common Core Student’s will be encouraged to: