If World War I Was a Bar Fight 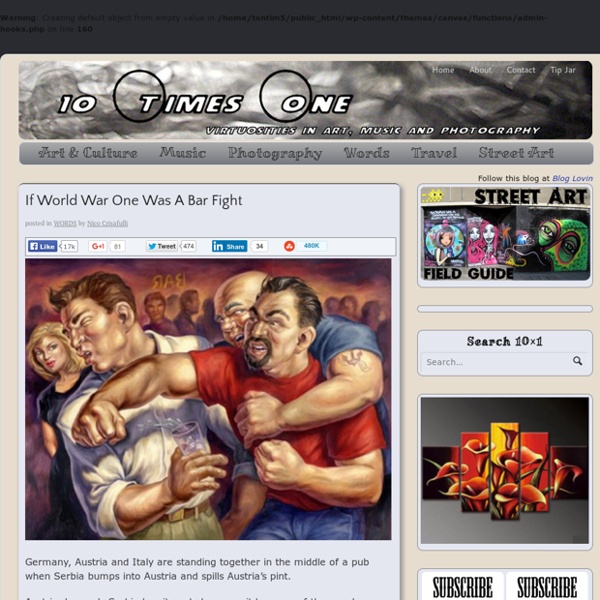 Germany, Austria and Italy are standing together in the middle of a pub when Serbia bumps into Austria and spills Austria’s pint. Austria demands Serbia buy it a whole new suit because of the new beer stains on its trouser leg. Germany expresses its support for Austria’s point of view. Britain recommends that everyone calm down a bit. Serbia points out that it can’t afford a whole suit, but offers to pay for the cleaning of Austria’s trousers. Russia and Serbia look at Austria. Austria asks Serbia who it’s looking at. Russia suggests that Austria should leave its little brother alone. Austria inquires as to whose army will assist Russia in doing so. Germany appeals to Britain that France has been looking at it, and that its sufficiently out of order that Britain not intervene. Britain replies that France can look at who it wants to, that Britain is looking at Germany too, and what is Germany going to do about it? Britain and France ask Germany whether it’s looking at Belgium. The End….

Girlfriend 1.0 To: Tech Support Last year I upgraded Girlfriend 1.0 to Wife 1.0 and noticed that the new program began unexpected child processing that took up a lot of space and valuable resources.No mention of this phenomenon was included in the product brochure. In addition, Wife 1.0 installs itself into all other programs and launches during system initialization where it monitors all other system activity. Applications such as Pokernight 10.3 and Beerbash 2.5 no longer run, crashing the system whenever selected. I cannot seem to purge Wife 1.0 from my system. I am thinking about going back to Girlfriend 1.0 but uninstall does not work on this program. See other random stuff Send feedback on this page Go to www.CSPANJunkie.org Women on the Home Front: Extraordinary images from the First World War Rare images show women manufacturing oil cakes, grain for food and deadly asbestos for fireproofingThey were taken by official Home Front photographer GP Lewis, who specialised in images of heavy industryMonumental 16ft prints have gone on display at the Imperial War Museum North in Manchester By Dan Bloom Published: 06:46 GMT, 21 January 2014 | Updated: 12:32 GMT, 21 January 2014 Considering they included mustard gas and trench foot, the dangers to soldiers in the First World War were all too obvious. But their wives and daughters hardly lived comfortably either - toiling on dangerous machines and making deadly materials such as asbestos to keep the nation from grinding to a halt. A new exhibition reveals a very human side to the war effort - showing women smiling as they drink tea and carry tyres and rolled glass. Life during wartime: Striking new images of women working during the First World War have gone on display at the Imperial War Museum North in Manchester. Fancy a cuppa?

Image of Mst3shades Image of Mst3shades This image is attached to the Mst3shades thing. Bigger Sizes Thumbnails large medium small tiny Previews featured card birdwing tinycard What Is Globalization? Finally, a definition of globalization that one can understand and to which we now can relate: Question: What is the truest definition of Globalization? Answer: Tragically, Princess Diana’s death. Question: Why? An English princess with an Egyptian boyfriend crashes in a French tunnel, driving a German car with a Dutch engine, driven by a Belgian who was drunk on Scottish whiskey, followed closely by Italian paparazzi on Japanese motorcycles; treated by an American doctor, using Brazilian medicines. This is sent to you by an American, using Bill Gate’s technology and you are probably reading this on your computer, that uses Taiwanese chips and a Korean monitor, assembled by Bangladeshi workers in a Singapore plant; transported by Indian lorry-drivers, hijacked by Indonesians, unloaded by Sicilian longshoremen and trucked to you by illegal Mexican workers… And that is what Globalization is. ~ source unknown ~

Decadent Lifestyle 38 Vintage Political Posters of World War II - StumbleUpon It’s a Motorcycle! It’s a Sports Car! No, It’s…Snaefell? « Gajitz Call it a tiny sports car with a motorcycle growing out of its side, or call it a sexy motorcycle with the world’s weirdest sidecar…but whatever you call it, the Snaefell is a feat of amateur genius. Built by Francois Knorreck, the wonderfully unique vehicle took more than a decade, 10,000 man-hours and more than 15,000 Euros to construct. The body of the sidecar was all custom-built, and inside it looks like an actual sports car. The motorcycle portion is built on a Laverda triple 1000cc base, giving it power and grace. And it needs it when it’s hauling around a sidecar that’s as big as a commuter car. The literal sidecar was built from various pieces of a Citroen Xantia, a VW GTI and an Audi 80.

Dear blank, please blank. NetAttic College Student Pays $14,000 Tuition with $1 Bills College student (University of Colorado, Boulder) Nic Ramos wanted to put the cost of education on the table, so he decided to pay his $14,000 tuition for one semester with $1 bills. Continue reading for the news report. Nic Ramos says he's trying to get people thinking about the increasing cost of an education. [via FOX8] Interesting Posts Around the Web