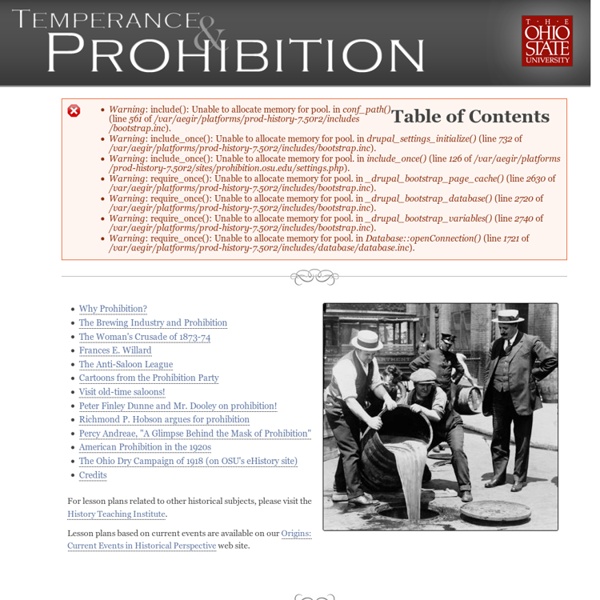 Our Documents - 100 Milestone Documents The following is a list of 100 milestone documents, compiled by the National Archives and Records Administration, and drawn primarily from its nationwide holdings. The documents chronicle United States history from 1776 to 1965. Complete List of Documents Please note that you can always use the thumbnail images at the top of every page to navigate directly to any of the 100 Milestone Documents. home Forward Together: SC in WWI Westerville Public Library What was the Anti-Saloon League? From 1893 to 1933, the Anti-Saloon League was a major force in American politics. Influencing the United States through lobbying and the printed word, it turned a moral crusade against the manufacture, sale and consumption of alcohol into the Prohibition Amendment to the United States Constitution. Under the motto "The Saloon Must Go," the organization worked to unify public anti-alcohol sentiment, enforce existing temperance laws and enact further anti-alcohol legislation. At first, the League appealed to local churches to carry its message to the people.

SoJust.net: Social Justice and Civil Rights Speeches Bella AbzugPlenary Address, Fourth World Congress on Women (1995) John AdamsInaugural Address (1797) Jane AddamsThe Subjective Necessity for Social Settlements (1892)The Modern Lear (1896) Immigration Timeline - The Statue of Liberty & Ellis Island By the 1880's, steam power had shortened the journey to America dramatically. Immigrants poured in from around the world: from the Middle East, the Mediterranean, Southern and Eastern Europe, and down from Canada. The door was wide open for Europeans. In the 1880s alone, 9% of the total population of Norway emigrated to America. After 1892, nearly all immigrants came in through the newly opened Ellis Island. One immigrant recalled arriving at Ellis Island: "The boat anchored at mid-bay and then they tendered us on the ship to Ellis Island…We got off the boat…you got your bag in your hand and went right into the building.