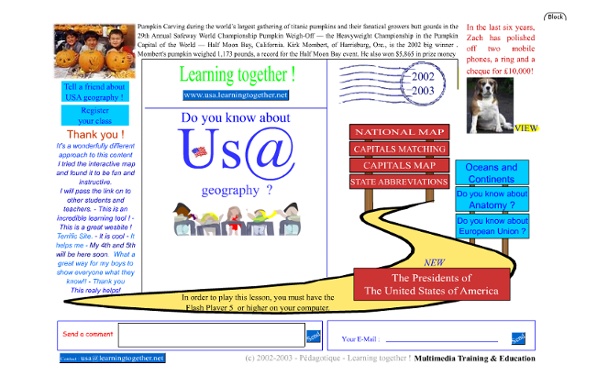 Test your geography knowledge - USA states | Lizard Point Small, hard to click regions are enhanced with a red circle, as shown below: U.S: Geography, states, landmarks, maps, cities, population, laws, speeches U.S. States, Cities, History, Maps Year by Year: 1900–2015 Enter a year: Special Features Today in History: Gone With the Wind Games & Quizzes Citizenship Quiz | State Nicknames Quiz | U.S. More United States Quizzes! United States PEOPLE & CULTURE Throughout its history, the United States has been a nation of immigrants. The population is diverse with people from all over the world seeking refuge and a better way of life. The country is divided into six regions: New England; the mid-Atlantic; the South; the Midwest; the Southwest, and the West. European settlers came to New England in search of religious freedom. These states are Connecticut, Maine, Massachusetts, New Hampshire, Rhode Island, and Vermont. The mid-Atlantic region includes Delaware, Maryland, New Jersey, New York, Pennsylvania, and the city of Washington, D.C. The South includes Alabama, Arkansas, Florida, Georgia, Kentucky, Louisiana, Mississippi, North Carolina, South Carolina, Tennessee, Virginia, and West Virginia, all of which struggled after the Civil War, which lasted from 1860-1865. The Midwest is home to the country's agricultural base and is called the "nation's breadbasket."

10 Top Tourist Attractions in the USA As one of the largest and most diverse countries in the world, The United States boast an amazing amount of tourist destinations ranging from the skyscrapers of New York and Chicago, the natural wonders of Yellowstone and Alaska to the sunny beaches of California, Florida and Hawaii. With so many tourist attractions it’s tempting to list entire cities or even states, but in this top 10 I have tried to focus on specific attractions. 10White House The White House in Washington DC is the official residence and office of the President of the United States. Where to Stay in Washington DC 9Denali National Park The Denali National Park and Preserve is located in Interior Alaska and contains Mount McKinley, the highest mountain in North America. Where to Stay in Denali National Park | Denali National Park Guide 8Las Vegas Strip The gambling mecca of the world, Las Vegas is situated in the midst of the southern Nevada desert landscape. Where to Stay in Las Vegas 7Florida Keys Florida Keys Guide 6Kilauea

Project-based learning, the USA and Authentic Video in the EFL classroom | Elisabeth Horn The Globe Trekker/Pilot Guides video collection is a treasure trove for any English teacher. It encompasses extensive material from every corner of the world, and especially English-speaking countries are lavished with attention. Australia, Canada, Scotland, Wales, Ireland, England – you name it. Even individual cities are endowed with an approx. 50-minute complete video of its own, like London, New York City, San Francisco, Los Angeles, New Orleans to name but a few. Covering the United States satisfactorily in the language classroom is a daunting project, especially if you want to give your students more than a superficial understanding of its history, geography, language and people. To date, Globe Trekker offers a range of videos on the USA, covering practically every individual state, and, so it seems, more is coming every new season. In addition to making this initial decision, there are quite a lot of follow-up issues to consider: The route travelled in the video “Deep South”

Mias klassrum USA Geography - Map Game - Geography Online Games "I stumbled upon your fun interactive geography games from a link on the Massachusetts Geographic Alliance Website. Since then, your games have become quite a hit with my competitive colleagues!" --Candice Gomes, Education Outreach Coordinator, Boston Public Library Sheppard Software's geography games were featured in the Boston Public Library's 2006 Exhibition on Mapping! "Terrific online educational games, especially geography." "I am a middle school social studies teacher who also sponsors a geography club after school. "Awesome site... it is the only reason I am passing my World Geography class!" "We love your interactive maps and are using them for 10th grade world history." "Let me say that you guys have an awesome website.