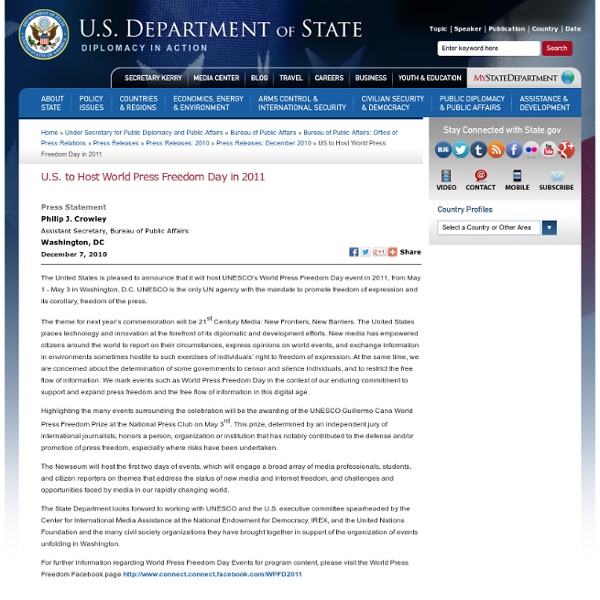 The United States is pleased to announce that it will host UNESCO’s World Press Freedom Day event in 2011, from May 1 - May 3 in Washington, D.C. UNESCO is the only UN agency with the mandate to promote freedom of expression and its corollary, freedom of the press. The theme for next year’s commemoration will be 21st Century Media: New Frontiers, New Barriers. Highlighting the many events surrounding the celebration will be the awarding of the UNESCO Guillermo Cano World Press Freedom Prize at the National Press Club on May 3rd. The Newseum will host the first two days of events, which will engage a broad array of media professionals, students, and citizen reporters on themes that address the status of new media and internet freedom, and challenges and opportunities faced by media in our rapidly changing world.

the sequel As Prepared for Delivery Good morning. I am delighted to be here to speak with you and through C-SPAN to the viewing audience around the United States. The daily briefings I do are on C-SPAN every day and feature snappy repartee with reporters who are a professional and talented group, who have been covering foreign policy in some cases longer than I have been in and around government. And this is my 34th year in some facet of national security policy. I came to appreciate the difference between the State Department Press Corps and journalists who cover other agencies or branches of the government. “Really,” the dean of the State Department Press Corps thundered. What I do every day is to enunciate the United States Government view on world affairs. Today we use a variety of media to communicate to governments and people around the world – formal briefings that are covered by traditional media, as well as social media to bypass governments and communicate directly with people.

Maybe you’re better off not holding hands and singing We Shall Overcome By Francesca Polletta Jennifer Earl and Katrina Kimport wade into the debate over the role of the Internet in contemporary social movements with a provocative claim: the Internet is ushering in a new repertoire of protest. In this repertoire, mobilizations are sporadic rather than deep-rooted and enduring. What makes this picture so compelling is not only that it is grounded in extensive and meticulous data on activists’ use of new digital media, but also that it builds on three decades of social movement theory and research. Earl and Kimport’s data is from 2006, and, as they point out, predates the rise of Facebook, Twitter, and Youtube. How about the two most recent movements to occupy the international center stage—the Arab Spring and the Occupy movements? On the other hand, new digital media have been vital to both movements. So a collective identify forged online may be mobilizing precisely insofar is it is virtual, and therefore partial and even ambiguous. [ii] Lea, M. 2007.

WL & Internet Freedom Here's a list of essential posts on current Wikileaks controversy, starting with coverage by techPresident's editors and including posts by the various speakers in Personal Democracy Forum's December 11 New York City symposium on Wikileaks and internet freedom, plus others we've found useful and/or provocative. Micah L. Sifry, "From Wikileaks to OpenLeaks, Via the Knight News Challenge," December 17, 2010. How a $532,000 grant the Knight Foundation decided not to award fits into a creative split in the WikiLeaks organization and the creation of a less centralized engine for safe leaking, OpenLeaks. Nick Judd, "The Art of Anonymous," December 16, 2010. Nancy Scola, "The Web's Social Contract: Does It Exist? Micah L Sifry, "After Wikileaks: The Promise of Internet Freedom, For Real," December 5, 2010. Nick Judd, "Wikileaks Has More Google Juice Than Justin Bieber, But what Will Searchers See?" Micah L. Jeff Jarvis, "Wikileaks: Power Shifts From Secrecy to Transparency," December 4, 2010.

U.S.-Funded Internet Liberation Project Finds Perfect Test Site: Occupy D.C. | Threat Level Occupy D.C. protesters preparing to livestream a solidarity march. Photo: Brendan Hoffman/Wired.com When Sascha Meinrath saw the Occupy encampment in D.C., he saw something few others would — a testbed for technology. Meinrath has been chasing a dream for more than a decade, ever since he was a liberal arts grad student in Urbana, Illinois: community wireless networks. From that small beginning, Meinrath now runs a State Department-funded initiative to create an Internet in a Suitcase — the Voice of America of the digital age. If he has his way, Meinrath’s project will lead to low-cost, easy-to-use wireless connections around the globe, all lashed together in mesh that can withstand the whims of dictators willing to pull the plug on the internet to quash dissent. “This started due to massive naiveté,” said Meinrath, whose official title is Director of the New America Foundation’s Open Technology Initiative.

Reining in freedom on the Web Photo: Lea Suzuki, The Chronicle Facebook CEO Mark Zuckerberg listens to speakers during a press conference at Facebook on Wednesday, October 6, 2010 in Palo Alto, Calif. Zuckerberg announced 3 new features including a new way to form groups. Reining in freedom on the Web A few days ago, Facebook asked me to change my user name. I had chosen a name composed entirely of Braille characters. When I signed up, Facebook asked me for my real name and verified my identity by getting me to enter a confirmation code it sent to my mobile phone. Facebook offers a cozy cocoon to its members, who can use it to communicate without being flooded with spam. Interactions on Facebook are always positive: You are allowed to say you "like" something by clicking on an icon, but you can't say you dislike it. But Facebook can sometimes be arbitrary. To help prevent spamming, members are invited to report nuisance messages: Facebook then suspends the nuisance user's account. ©2010 Le Monde diplomatique

Afghanistan: Draft Law Threatens Media Freedom (New York) – The Afghan government should withdraw a draft media law that would expand government control over the media and chill free speech. The draft law raises serious questions about the Afghan government's commitment to freedom of expression.The proposed law, which would replace the 2009 media law, was recently circulated by the Ministry of Information and Culture to other government bodies for comment before it goes to parliament. It would greatly increase government control over the media by the information and culture minister, deputy ministers, and other officials within a complex set of regulatory bodies. “Press freedom has been one of Afghanistan’s most important success stories since 2001,” said Brad Adams, Asia director at Human Rights Watch. A number of provisions in the draft law would undermine free expression, Human Rights Watch said. Even the word choice of media outlets would be controlled by the government, Human Rights Watch said.

Internet Freedom Fraud (Morozov) Originally posted on Slate. In March of this year, Hillary Clinton announced that the U.S. government had granted a license to a company whose software would "help information continue to flow freely into and out of Iran." That software was called Haystack, an anti-censorship tool that received glowing coverage from the BBC, NPR, the Christian Science Monitor, the International Herald Tribune, and many other news sources. Perhaps it was Haystack's teasing, provocative slogan -- "Good luck finding that needle" -- that so intrigued the reporters. Heap came up with the idea for Haystack during the 2009 Iranian protests, when the country's draconian censorship system prevented communication with the outside world. There are plenty of other tools that can help circumvent censorship. It all sounded great in theory, until security professionals began asking Austin Heap for a copy of Haystack's code. Heap's ambitious plans for Haystack went far beyond Iran. SHADISHD173/AFP/Getty Images

Social Media Prosecutions Threaten Free Speech in the UK -- and Beyond (London) — Visitors to Hyde Park on a Sunday can see people standing on stepladders engaged in passionate debate with groups clustered around them. Speakers’ Corner is a symbol of Britain’s centuries old commitment to freedom of speech. When it comes to free speech on the internet, however, Britain seems to have lost its way. Recent prosecutions for material posted on social media sites and internet forum raise troubling questions about the state of the law and limits of free expression. These prosecutions are causing dismay not just in the UK but among those battling internet censorship around the globe. This week alone, a 19-year old man was sentenced to 12 weeks in a young offenders’ institution after posting comments, some sexual, about two girls who are missing and presumed dead. In March, a 21-year old man was sentenced to 56 days in prison for racist comments on Twitter about a seriously ill black footballer. Hyde Park has long been famous.