Landmarks of the USA 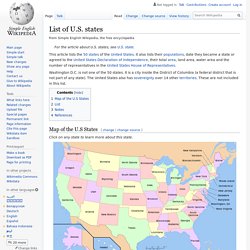 It also lists their populations, date they became a state or agreed to the United States Declaration of Independence, their total area, land area, water area and the number of representatives in the United States House of Representatives. Washington D.C. is not one of the 50 states. It is a city inside the District of Columbia (a federal district that is not part of any state). The United States also has sovereignty over 14 other territories. These are not included in this list. Map of the U.S States[change | change source] Click on any state to learn more about this state. 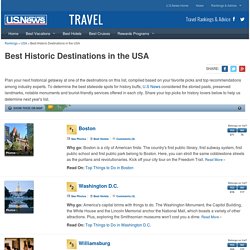 To determine the best stateside spots for history buffs, U.S News considered the storied pasts, preserved landmarks, notable monuments and tourist-friendly services offered in each city. Share your top picks for history lovers below to help us determine next year's list. Belongs on list? Thanks for voting!

Most Unusual US Landmarks. After coming across USA Today’s list of America’s Quirkiest Attractions, I felt it would be fun to mention a few of my picks. 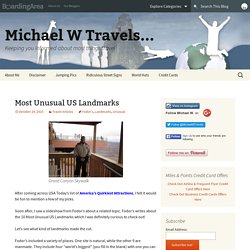 Soon after, I saw a slideshow from Fodor’s about a related topic. Fodor’s writes about the 10 Most Unusual US Landmarks which I was definitely curious to check out! Let’s see what kind of landmarks made the cut. Fodor’s included a variety of places. One site is natural, while the other 9 are manmade. Here is the list: National Landmarks: Memorials, landmarks, national symbols. 20 overlooked national landmarks in the US. AMERICA IS LARGE, with tons of landmark sites beyond Niagara, Mt. 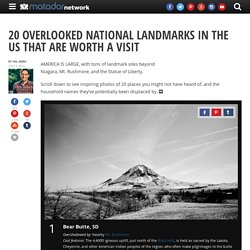 Rushmore, and the Statue of Liberty. Scroll down to see inspiring photos of 20 places you might not have heard of, and the household names they’ve potentially been displaced by. Delaware, Caesar Rodney Statue : 50 States, 50 Landmarks. U.S. National Landmarks « The Fountains of Bellagio, Las Vegas - America's Most Beautiful Landmarks. More than 750,000 people rush through Grand Central Terminal every day, barely taking notice of the spectacular Beaux-Arts building that surrounds them. 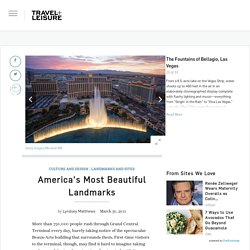 First-time visitors to the terminal, though, may find it hard to imagine taking such an architectural masterpiece for granted: with its massive, echoing main concourse, soaring multipaned windows, and vibrant astronomical ceiling mural, it’s one of America’s great structural gems. Little wonder that so many tourists (some 21.6 million per year) can be seen standing amid the crowds of commuters, marveling and snapping cell-phone photos. While the Eiffel Tower, the Taj Mahal, and Mount Fuji may be the first images that come to mind when we picture beautiful landmarks, the truth is that there are numerous dazzling sights—both natural and man-made—right here in the United States.

And while some of them may require a road trip or plane ride to get to, others, like Grand Central, may be practically right under our noses. 50 States, 50 Landmarks. States A-L ALABAMA: Civil Rights Memorial A granite memorial in Montgomery (near Dexter Avenue Baptist Church, former parish of Dr. 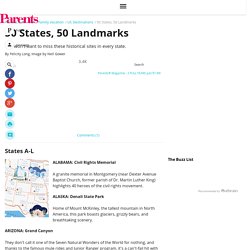 Martin Luther King) highlights 40 heroes of the civil rights movement. ALASKA: Denali State Park Home of Mount McKinley, the tallest mountain in North America, this park boasts glaciers, grizzly bears, and breathtaking scenery. ARIZONA: Grand Canyon They don't call it one of the Seven Natural Wonders of the World for nothing, and thanks to the famous mule rides and Junior Ranger program, it's a can't-fail hit with families. ARKANSAS: Ozark Folk Center Mountain music, an interactive crafts village, and a country store make a visit to the Ozarks a trip into the heart of Americana.

CALIFORNIA: Golden Gate Bridge Whether you drive over it, take a tour boat under it, or gaze at it from shore, this San Francisco icon welcomes 9 million visitors a year. COLORADO: Mesa Verde CONNECTICUT: Mystic Seaport DELAWARE: Brandywine Valley.