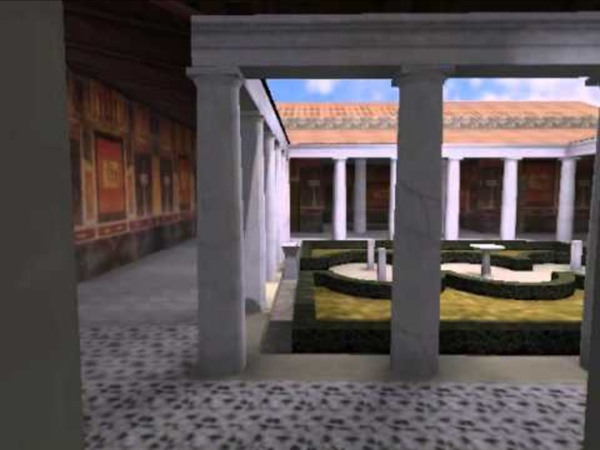 How 3rd century Chinese saw the Romans A country of “numerous minor kings” where fierce tigers and lions kill travelers. That doesn’t sound like your average description of Rome, does it? The borders of the Roman Empire and Han China around 100 AD. It’s hard to forget just how connected the world is nowadays. In ancient times, most people would be blissfully unaware of the entire world outside their local community. Rome Reborn Images - Rome Reborn 2.2 - City Views An aerial view of the city center seen from the east. Visible are the Tiber River, Circus Maximus, Palatine, and Colosseum. Medium Resolution A typical street scene.

The Roman Domus The Roman domus was much more than a place of dwelling for a Roman familia. It also served as a place of business and a religious center for worship. The size of a domus could range from a very small house to a luxurious mansion. In some cases, one domus took up an entire city-block, while more commonly, there were up to 8 domus per insula (city-block). All domus were free-standing structures.

Timgad Timgad Timgad lies on the northern slopes of the Aurès mountains and was created ex nihilo as a military colony by the Emperor Trajan in AD 100. With its square enclosure and orthogonal design based on the cardo and decumanus, the two perpendicular routes running through the city, it is an excellent example of Roman town planning. Why Roman concrete still stands strong while modern version decays Their structures are still standing more than 1,500 years after the last centurion snuffed it: now the Romans’ secret of durable marine concrete has finally been cracked. The Roman recipe – a mix of volcanic ash, lime (calcium oxide), seawater and lumps of volcanic rock – held together piers, breakwaters and harbours. Moreover, in contrast to modern materials, the ancient water-based structures became stronger over time. Scientists say this is the result of seawater reacting with the volcanic material in the cement and creating new minerals that reinforced the concrete.

Acropolis Virtual Tour The Virtual Tour of the Acropolis is a web application based on HTML5 technologies (webGL and CSS3D) to display effectively panoramic photographic images in desktop and mobile browsers. The production of panoramic photomosaics at resolutions of several gigapixels was realised between 2010 and 2014 by employing established practices of digital image acquisition and processing. In order to achieve the best possible mapping of natural lighting on the monuments together with the display of shaded details, High Dynamic Range (HDR) imaging techniques were used for capturing and combining different exposure levels of the same theme. Starting from the RAW photos all the way up to the combined and color-corrected finalised panoramas, all intermediate outputs were maintained in order to be able to reproduce and control the entire manufacturing process for future reference. The krpano viewer and revelant tools are used for the display of the panoramic images within the application.

How Archaeologists Crammed 1500 Years of Roman History Into One Map Rome wasn’t built in a day, so it stands to reason that a modern map of the ancient city might take a considerable amount of time as well—almost a decade, to be precise. The task was a Sisyphean one (though that was a myth from Ancient Greece.) How do you represent 1,500 of the city’s 3,000 years’ worth of history in print format, showing how Rome evolved in each era, what was destroyed, what remained, how its citizens lived and died, and which streets they walked on? Italian archaeologists Andrea Carandini and Paolo Carafa assembled a team to do just that. The result is The Atlas of Ancient Rome, a two-volume, 1000-page book that follows the development of Rome from the 10th century B.C. to the 6th century A.D. Compiling the book also required constructing and patenting a geographic information system into which they organized all their information.

theconversation We all know the phrase “all roads lead to Rome”. Today, it is used proverbially and has come to mean something like “there is more than one way to reach the same goal”. But did all roads ever really lead to the eternal city? The power of pavement There was a close connection between roads and imperial power. The Roman Roads of Britain Visualized as a Subway Map Walk around London with someone who knows its deep history — not hard to arrange, given the way London enthusiasts treat historical knowledge as a hypercompetitive sport — and you'll have more than a few paths of "Roman roads" pointed out to you. Even in the city of Big Ben and Buckingham Palace, the Shard and the Gherkin, chicken shops and curry houses, there remain fragments and traces of the 2,000 miles of roads the Roman Army built between British towns and cities between 43 and 410 AD, Britain's centuries as a province of the Roman Empire. Though some of Britain's Roman Roads have become modern motorways, most no longer exist in any form but those bits and pieces history buffs like to spot. This makes it difficult to get a sense of how they all ran and where — or at least it did until Sasha Trubetskoy made a Roman Roads of Britain Network Map in the graphic-design style of the subway maps you'll find in London or any other major city today. Related Content:

Veni, Vidi, Gone: A Death Map of Roman Emperors Totalus Rankium is “a fun, informative podcast where we rank the Roman Emperors based on: fighting ability; madness; their successes; what they looked like and how long they lasted”. For that last metric they also produced this map, showing the locations where Roman emperors expired. To be the Emperor of Rome was to be leader of the biggest and most powerful empire the world had yet seen. However, even in a world where life already tended to be nasty, brutish and short, it was one of the more dangerous jobs: only about a quarter of all Roman emperors died a natural death. According to this graph, of the 70 Emperors to rule Rome between 14 and 395 AD, more died of assassination (23) than of natural causes (20), and that’s not even including those who were possibly assassinated (8), executed (3) or forced to commit suicide (5).

Caesar's invasion of Britain began from Pegwell Bay in Kent, say archaeologists Julius Caesar’s invasion of Britain was launched from the sandy shores of Pegwell Bay on the most easterly tip of Kent, according to fresh evidence unearthed by archaeologists. Researchers named the wide, shallow bay the most likely landing spot for the Roman fleet after excavators found the remains of a defensive base dating to the first century BC in the nearby hamlet of Ebbsfleet, near Ramsgate. The ancient base covered more than 20 hectares and would have been ideally placed to protect the 800 ships the Roman army had to haul ashore when they were battered by a storm soon after they arrived from France in 54BC. “This is the first archaeological evidence we have for Julius Caesar’s invasion of Britain,” said Andrew Fitzpatrick, a researcher at the University of Leicester. “It’s a large defended site that dates to the first century BC.”

Take Back Halloween! Related post: Last-minute Vestal Virgin (a pile of sheets and some yarn, basically) The Vestal Virgins were the six priestesses who tended the sacred flame of Vesta, goddess of the hearth, in ancient Rome. They were far and away the most privileged women in Roman society, and in fact they were the only women who were granted the basic legal rights that male citizens possessed automatically. Unlike other Roman women, the Vestals could make wills, vote, and live free from the control of their male relatives.

Crash Course: Evolution of the Roman Military Accorded by some as being the most effective and long-lived military institution known to history, Rome’s military was the key to its rise from a relative backwater settlement in Italy to the most dominant power of the ancient world. Throughout its millennia-spanning history, Rome’s military underwent substantial changes as it contended with challenges both within its expanding borders and from neighboring adversaries who threatened to harm the integrity of its borders. Here is a crash course on the evolution of the Roman military. Phase I (c. 753 BC – c. 578 BC) Phase II (578 BC – c. 315 BC)