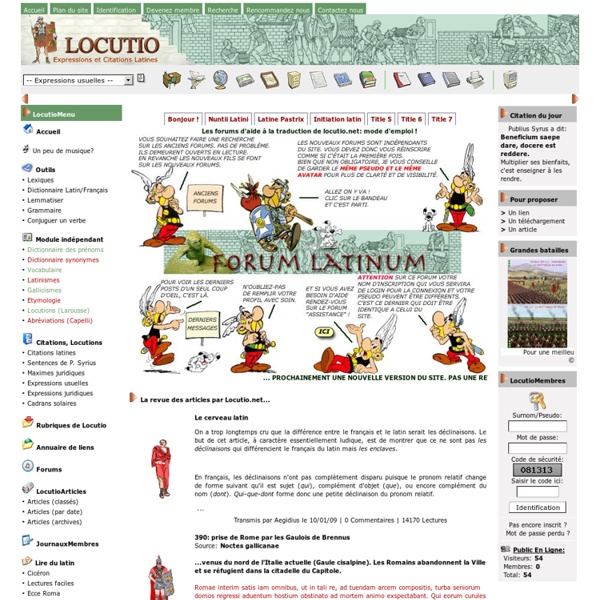 Books on Ancient Roman Sexuality Posted on 29. Mar, 2011 by kunthra in Uncategorized For some reason we have always been fascinated by ancient Roman sexuality. In previous times, the discussion of ancient Roman sexuality was either covered up or ignored. List of Latin phrases This page lists direct English translations of common Latin phrases, such as veni, vidi, vici and et cetera. Some of the phrases are themselves translations of Greek phrases, as Greek rhetoric and literature were highly regarded in ancient Rome when Latin rhetoric and literature were still maturing. The Latin letter i can be used as either a vowel or a consonant.

The first HD movie podcast of Italy for Apple TV - HD video city guides of Rome After the success of its audio guides for iPod, ItalyGuides.it is delighted to introduce you to the HDTV podcast on Italy specifically designed for Apple TV*. Italy in prime time! The Podcast was designed to present Italy's enormous art and nature heritage at its very best, like never before! How Do You Say 'Hot Dog' in Latin? REMEMBER your ninth-grade Latin lessons? Here's a test: What is an ''escariorum lavator''? Or a ''birota automataria levis''? Open University Interactive Latin Welcome Welcome to the Open University's Interactive Latin website. If you are learning Latin word endings, this site is for you! You can quiz yourself on noun, verb and adjective endings.

How to Write a Love Letter in Latin Posted on 11. Jun, 2014 by Brittany Britanniae in Latin Language Whether you are writing a love letter to a old or new romance, it is always a good idea to “spice” up the normal, same, banal content with something unique to make your significant other feel special. Why not add a little Latin? This post is dedicated to add some Latin to your love life in a love letter (Epistula Amoris). GRASP Method for Acquiring Latin Paedagogica Index GRASP Preface GRASP Handout Go to a sample GRASP text. GRASP stands for GRadual Aggregative Syntactic Praxis. GRASP is a pedagogical method that presents the parts of sentences bit-by-bit, with variety and incremental complexity, to help learners attain the ability to grasp the original text in the order in which it was written, with immediate comprehension. It can be applied to any text, but it is especially helpful when applied to texts of syntactical complexity. GRASP is based upon the insight of some SLA (Second-Language Acquisition) theory that claims that solid language acquisition depends upon a proportionately great quantity of comprehensible input and upon the learners' growing abilities to interpret that input.

Project: Thesaurus linguae Latinae The foundation of the work is the archive of dictionary slips. The archive is exhaustive for all surviving Latin texts down to the second century of the Christian era. For the later period a selection of examples was made by specialists; this sensible restriction limited the overall quantity of material, which otherwise, by its sheer volume, would have made the work impossible. Each passage containing a particular word is examined with regard to meaning, spelling, prosody and so on, and groups of similar examples are then formed.