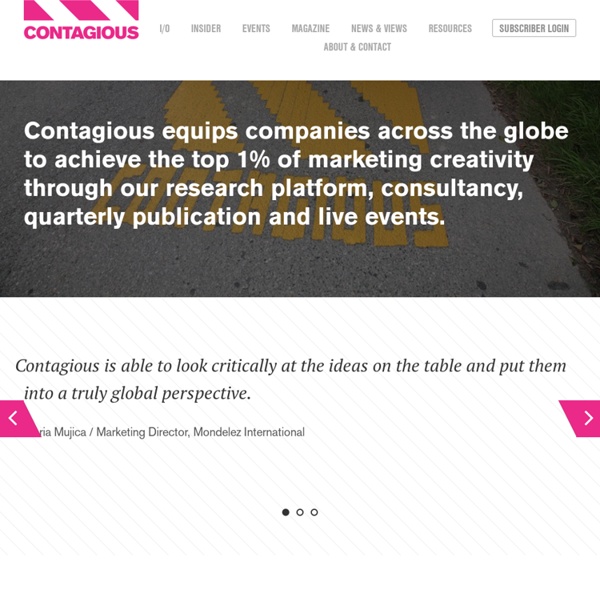 Building A Purposeful Brand As part of our ongoing work on #ProjectReconnect with the WFA, we recently explored the premise that all brands today must be ‘purposeful’. They’ve been kind enough to let us share our findings here too. Purposeful Brands In today’s competitive world, a great product is no longer enough for a brand to succeed. A great product is still critical of course; no-one would willingly buy a bad product twice.

Marmite aims to spread love with Facebook e-cards Available from today, the e-cards come with three different messages about love. Visitors to the Marmite fan page who ‘like’ the brand will be able to send one of the e-cards to contacts within their network on Valentine's Day. The campaign was devised by Splendid Communications. Marmite, famous for its ‘you either love it or you hate it’ positioning, has more than 770,000 fans on its brand page. It is already very active with the community, posting Marmite recipes, videos and naming fans of the month.

Top 10 Best Kinect Hacks Thanks to ever-growing Kinect Community, there are a lot of great Kinect programs/hacks out there and more come each day. The artists, developers and technology enthusiast who belong to the Kinect Community have presented and share their Kinect programs not only within the community, but also to the rest of the world. In honor of the community as well as the Kinect device, Kinecthacks.com has currently compiled its TOP 10 BEST KINECT HACKS. The team has gone through a lot of content it has featured in order to create this list of the best and most brilliant Kinect programs.

Great Direct Mail Piece Puts a Porsche in Your Driveway Usually, when someone sneaks up to a rich guy's house and drives off with a Porsche, it's a reason to call the police. This time, it might be a reason to call an auto dealership. In a clever spin on direct mail for Toronto's Pfaff Automotive, Canadian agency Lowe Roche photographed one of the dealership's Porsches in the driveways of affluent homes, then used each image to create an ad left at the home where it was shot. The headline: "It's closer than you think." The result, according to the agency's case study video below, was a 32 percent response rate to a site where recipients could schedule a test drive. Direct mail is typically about hitting as many people as possible for as low a cost as possible, but this creative idea shows that for luxury brands, a smaller effort can sometimes go a long way.

North Face Steps Up To Responsibly Manage an Invisible Waste Stream Photo credit: Jason Cartwright/Creative Commons If you're like a lot of people these days, you know that avoiding plastic use is a good idea. You ditch the single serving water bottles for a good steel one. You choose paper rather than plastic. But did you know that many of your clothing purchases, use plastic that you never see - Even from the greenest of companies, like The North Face? It's an unseen environmental woe that consumers, at least directly, haven't been able to do something about. 5 Rules For Marketing In The Age Of Discovery Marketing has entered a new age: Information is no longer programmed into consumers' minds. Since its inception, advertising has been dedicated to the creation of programmed messaging. For nearly 300 years, those who could create the best message and deliver it in a memorable way across as wide an audience as possible won. In less than a decade, the types of content and ways we consume it have completely changed.

Marmageddon - it's really happening It's been dubbed Marmageddon and the Marmapocalypse ... but Marmite-maker Sanitarium insists it didn't plan the shortage crisis. But the company has been quick to capitalise on the resultant hysteria as shelves empty of the breakfast spread, a marketing expert says. As the last remaining stocks disappear from shelves, Dr Bodo Lang, senior marketing lecturer at Auckland University, said the exposure across both mainstream and social media had turned around a bad situation for the firm. "The worst that could have happened is if they run out quietly and leave a sour taste in consumers' mouths," said Dr Lang, whose research area is word-to-mouth and viral marketing. "I'd be very surprised if Sanitarium's PR company or ad agency wasn't involved in this ... if they hadn't done a few things to help this go viral."

MIT Uses XBox Kinect to Create Minority Report Interface Minority Report has come to life thanks to the Kinect and MIT. In the movie Minority Report, Tom Cruise uses an advanced user interface system that lets him control media files with nothing more than a gesture from his gloved hands. He could do the same now with little more than an XBox. A member of the research staff at MIT’s Computer Science and Artificial Intelligence Laboratory (CSAIL) has created a Minority Report interface using the Kinect 3D sensor and a bunch of open source software. Best Slogans: the experts' view As regular readers of the CR blog will be aware, we are devoting a forthcoming issue of the magazine to looking at the best slogans ever. We canvassed your opinions on the blog, and have now approached a panel of industry experts to give us their top five slogans. Here's what they picked... John Hegarty, BBH 1. Liberté, egalité, fraternité: three words that encapsulated the ambitions of the French Revolution that changed Europe forever.

Greenslinging: Recycled Shoemaker Not Perfect, Says Newspaper As the rising buzz around "green" easily gives way to the static of "greenwash," a report in London’s middlebrow The Mail on Sunday last month slamming recycled footwear maker Worn Again has raised some eyebrows around these parts. The piece claims that the shoes—made out of recycled materials and lately made famous by eagerly green Tory leader David Cameron—are “actually made in a vast shoe factory in China where workers, who live in grim dormitories, are so unhappy with their pay and conditions that nearly one-tenth of them walked out on their jobs in February." The shoes are made out of recycled materials shipped from the UK to China's Guangdong province at a high CO2 cost.

Why Branding Is An Artifact Of The Past A short while ago, I wrote an article on this site suggesting that you can’t build a brand simply by setting out to build a brand. And in fact, thinking too much about brands can actually get in the way of the real business of your company. I suggested that you try an experiment: Stop talking about brands for a month, and see what happens.

How do you like your Vegemite? Australians are brought up to love Vegemite, a dark brown paste made from the yeast byproducts of brewing. Well many do. In fact it’s a bit like Marmite in the UK, you either love it or hate it. But Kraft is not taking the love it or hate line.

Two Kinects Can Make A Model Of The World Around You @Bakamoichigei: If someone did this professionally, couldn't they simply code something to cut out a lot of that? Like, the table above...if it's clear there's a linear surface, could a program figure that out and when displaying it on screen reduce all that interference? @Luke Plunkett: The issue is this part right here: "if it's clear there's a linear surface." It may be clear to you and me, but it wouldn't be so clear to a computer.