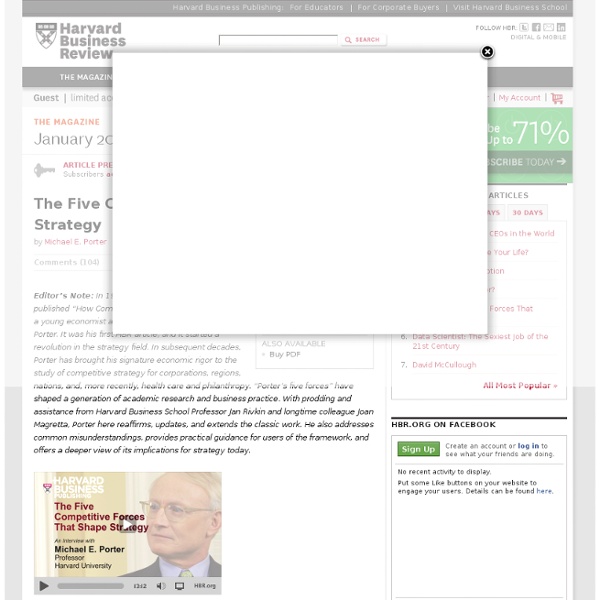 Editor’s Note: In 1979, Harvard Business Review published “How Competitive Forces Shape Strategy” by a young economist and associate professor, Michael E. Porter. It was his first HBR article, and it started a revolution in the strategy field. In subsequent decades, Porter has brought his signature economic rigor to the study of competitive strategy for corporations, regions, nations, and, more recently, health care and philanthropy. In essence, the job of the strategist is to understand and cope with competition. As different from one another as industries might appear on the surface, the underlying drivers of profitability are the same. The Five Forces That Shape Industry Competition If the forces are intense, as they are in such industries as airlines, textiles, and hotels, almost no company earns attractive returns on investment. Forces That Shape Competition The configuration of the five forces differs by industry.

The Great Repeatable Business Model Idea in Brief Really successful companies build their strategies on a few vivid and hardy forms of differentiation that act as a system and reinforce one another. They grow in ways that exploit their core differentiators by replicating them in new contexts. Powerful differentiations deliver enduring profits only when they are supported by simple, nonnegotiable principles and robust learning systems that drive constant improvement across the business. Differentiation is the essence of strategy, the prime source of competitive advantage. The sharper your differentiation, the greater your advantage. In studying companies that sustained a high level of performance over many years, we found that more than 80% of them had this kind of well-defined and easily understood differentiation at the center of their strategy. You can find high performers like these in most industries. But differentiation tends to wear with age, and not just because competitors try hard to undermine or replicate it.

Featured case: ZARA: Staying Fast and Fresh | The Case Centre, for educators Felipe Caro, UCLA Anderson School of Management, discusses his award-winning case ZARA: Staying Fast and Fresh. Zara, the flagship brand of the Spanish retail conglomerate Inditex, is one of the leading retailers of fast-fashion, churning out frequent in-season assortment changes of knockoffs of popular runway styles and trendy fashions. The company has received a lot of attention for its centralized distribution model. In the past 10 years Inditex, and more specifically Zara, has been studied by MBA students, the world over, to understand its success in distribution and supply chain efficiency. Why Zara? Zara is definitely a success story in the apparel world - comparable to Toyota in the automobile industry - and big part of the success is due to its operations. Making contact My initial contact with Zara goes back to 2005 when I had just finished my PhD. Improving the case After completion I find that the best way to improve a case is teaching it in the classroom. Teaching objectives

Competition Is NOT Part of Your Business Model Every couple of weeks somebody sends me an email writing that I'm missing a building block in the Business Model Canvas. Often, they point out that competition is missing. They're wrong. "Competition" is not a business model building block, it's part of the environment in which you design your business model. Though I believe we're too obsessed with competition, it would obviously be naive not to take into account existing or potential competitors when you design your business model. We came up with this environmental model, because there was no concept out there that looked at the Business Model Design Environment in a simple, holistic, and visual way.

Lean manufacturing Overview[edit] The difference between these two approaches is not the goal itself, but rather the prime approach to achieving it. The implementation of smooth flow exposes quality problems that already existed, and thus waste reduction naturally happens as a consequence. The advantage claimed for this approach is that it naturally takes a system-wide perspective, whereas a waste focus sometimes wrongly assumes this perspective. Both lean and TPS can be seen as a loosely connected set of potentially competing principles whose goal is cost reduction by the elimination of waste.[5] These principles include: Pull processing, Perfect first-time quality, Waste minimization, Continuous improvement, Flexibility, Building and maintaining a long term relationship with suppliers, Autonomation, Load leveling and Production flow and Visual control. Origins[edit] Lean aims to make the work simple enough to understand, do and manage. A brief history of waste reduction thinking[edit] 20th century[edit]

What about the Competition? « Five Whys Whatever happened to building strategic competitive advantage? With all the talk of business model generation, lean startups and customer development you might be forgiven for having thought that competitive advantage was all a bit last season. If you spent good money on a business degree that taught you otherwise, never fear. All is not forgotten. Alex Osterwalder, author of Business Model Generation, has had some interesting thoughts on competition. Both Steve Blank‘s customer discovery and Eric Ries‘s lean startup have you iterate through a bunch of business models until you find something that works. Starting with an idea to develop a lesson plan exchange for teachers, you might try out some simple (and testable) hypotheses to find out if there is a problem worth solving, and whether or not your idea is up to the job. But when should you test for competitive advantage? Unfair Advantage Summary Like this: Like Loading...

Strategy is the story | Strategy is the story Strategy and entrepreneurship It may not be in the job description for most CEOs, but Freek Vermeulen says that a good leader must also be a good storyteller. Rest assured: we’re not making this up. Stevie Spring, who recently stepped down after a successful stint as CEO of Future plc, the specialty magazine publisher, once told me, “I am not really the company’s CEO; what I really am is its Chief Story Teller.” What she meant is that she believed that telling a story was her most important task as a CEO. Not fiction All successful CEOs whom I have seen were great storytellers. When I say this, I am not implying that CEOs need to engage in fiction, nor do they need to be overly dramatic. First, the story must provide clear choices. Moreover, it has to be clear how the choices made by the company’s leaders hang together. Second, the story must tie to the company’s resources. Additionally, the company had a great design capability in its hometown of Margate. Only a beginning

Your Competitive Strategy – what direction is it taking you? During the last two decades the political, economic and technological developments have changed the world like never before in human history. Starting with the collapse of USSR and the end of bi-polar world political order, the world politics started converging. This gave momentum to coordinated global economic efforts and the formation of World Trade Organization. The liberalization of economies and reduction in trade barriers, coincided with the emergence and embracing of Internet globally, and helped shape the world that we are in today. The globalization of markets, rapid removal of trade barriers helped many large markets to open up for new competition. The advances in the Internet, and related communication technologies, helped the economic integration as well as made the scale of market competition global. As the creation of knowledge became more accessible the information that was exclusive to incumbents became available to all. #1. #2. #3.

Four Quadrants of Innovation Incremental versus Disruptive by Hutch Carpenter I recently wrote up a post, “Innovation Perspectives – No Shooting Stars.” In it, I discussed the issue of organizations myopically focusing on only disruptive innovations to the exclusion of more incremental or sustaining innovations. In doing more research on the subject, I began thinking about the dynamics that apply when a firm pursues different kinds of innovation. Building on that, I wanted a framework for delineating innovations based on their technology and business impacts. In each quadrant, there are different rationales and issues that apply. Existing Tech, Manage Existing Market The lower left quadrant represent innovations that leverage existing technology, and service existing customers. Example? “Wal-Mart has taken a number of steps, including the installation of diesel Auxiliary Power Units on all its trucks, and applying aerodynamic skirting. Improving the customer experience is also a critical opportunity.