Global Dynamics Processes: the Pattern which Connects from KaliYuga to Tao 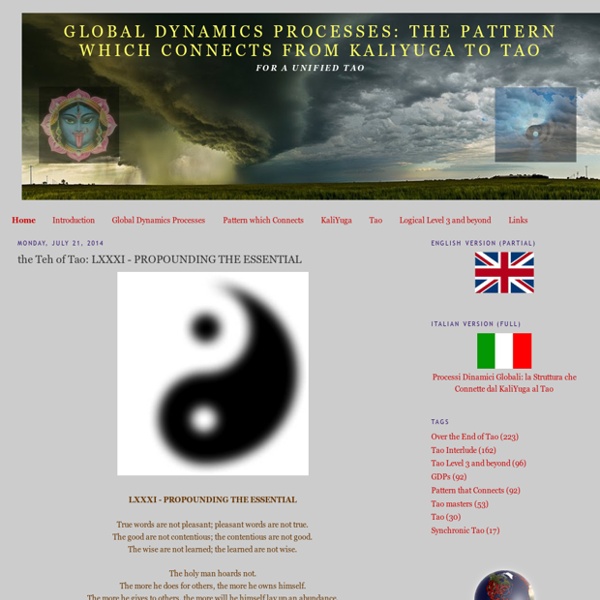 Complexity: It’s Not That Simple Complexity theory has been around for a generation now, but most people don’t understand it. I often read or listen to consultants, ‘experts’ and media people who proffer ludicrously simplistic ‘solutions’ to complex predicaments. Since it seems most people would prefer things to be simple, these ‘experts’ always seem to have an uncritical audience. Because most of what’s written about complexity theory is dense, academic and/or expensive, I thought I’d try to summarize the key points of complexity theory (focusing on the social/ecological aspects of it, not the mathematical/scientific ones) using lots of examples for clarity, and in a way that might be used practically by those grappling with complex issues and challenges. Complexity theory argues that simple, complicated, complex and chaotic systems have fundamentally different properties, and therefore different approaches and processes are needed when dealing with issues and challenges in each of these types of systems.

Why we hate Complexity Natural and social systems are complex — that is, not entirely knowable, unpredictable, resistant to cause-and-effect analysis, in a word, mysterious. For our first three million years on Earth we humans, like every other species on the planet, accepted that mystery. We adapted rather than trying to change our environment. But with the invention of civilization, we stopped accommodating change and started imposing it on our environment so we wouldn’t have to change. The problem is, our brains are severely limited in what they are capable of understanding. Once we invented civilization, and started to need to change our environment a lot, we needed to invent science. Even scientists loathe the imperfections in their models. One of the principles that stresses scientists, mathematicians, philosophers and theologists the most is the concept of infinity. The reason for this is that, to survive very well in a healthy ecosystem, there is no need to worry about infinity. Why?

Unification of Science and Spirit: Chapter 5 - THE COMPLEX, CHAOTIC WORLD Chapter 5 Western philosophy and science have tended to focus on annamaya, the world out there -- the objective world, solid, definite, and inanimate. Non-Western cultures, on the other hand, have generally had more of an inclination to consider the world as alive. That is, they have focused more on the pranamaya level of being. But today, things are changing. Computer technology might, at first glance, seem to be opposed to this increasing acceptance of the aliveness and intelligence of the world. In the realm of science, however, the effect of computers has overwhelmingly been to work against the reductionist, mechanistic world-view, against the isolation of mind from body, and the isolation of body from environment. Before computers, scientists had to rely on logical thought and mathematical analysis to construct their theories and experiments. This is the story of complexity science. Some of these holistic therapies are remarkably effective; others, no doubt, are pure chicanery.

Unification of Science and Spirit: Chapter 6 - MIND AS A COMPLEX SYSETM Chapter 6 Among my many memories of early childhood, a few stand out with particular vigor. First and foremost, there is Neil Armstrong walking on the moon -- this was around the time of my second birthday, but I remember it as well as anything I've watched on TV since. I understood where the moon was -- way up in the sky -- and that this man, dressed in a funny suit, was walking on it, having just flown there in something faster than an airplane. I was puzzled by "One small step for a man, one great leap for mankind" -- I concluded, not unreasonably, that a "mankind" was some kind of miniature human being, perhaps a sort of midget-monkey hybrid. I wondered why, if they had brought one of these "mankind" creatures along on the spaceship with them, they hadn't shown it on TV. Another glowingly vivid memory, from a couple years later, is watching my mother roll out of the hospital in a wheelchair, holding my newborn baby sister in her arms. I thought back to a previous "Eureka!"

How the Downs-Thomson Paradox will ruin your commute "There are two basic choices for transportation, public transit systems and private cars. If both methods get too slow, it's generally easier to build an extra road, or make a regular road into a freeway, than set up an entirely new system of public transportation. Unfortunately, that extra road can make the car commute so very much faster than public transportation that people leave subways and pile into cars." If only I could have cited this paradox about 14 years ago when Tim Eyman was gutting public transit in my state. I visited the Bay Area about 8 years ago, after being absent from California for nearly 20 years and what I noticed was how huge built up the highway system was in comparison to what I remember as a kid of 10 in 1974.