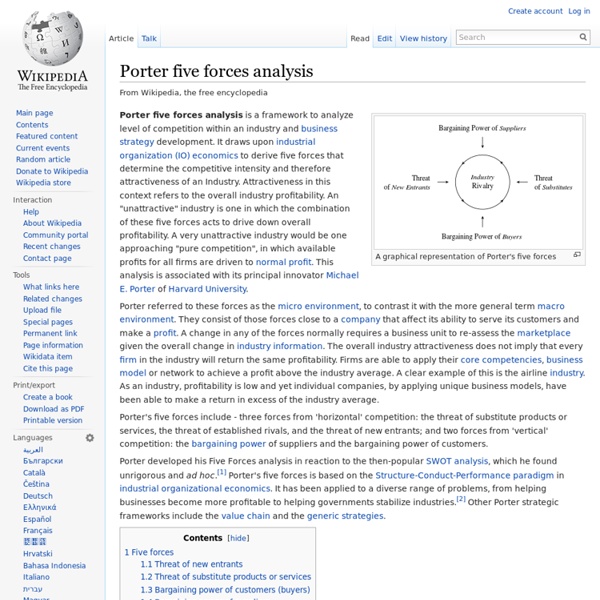 A graphical representation of Porter's five forces Porter's five forces include - three forces from 'horizontal' competition: the threat of substitute products or services, the threat of established rivals, and the threat of new entrants; and two forces from 'vertical' competition: the bargaining power of suppliers and the bargaining power of customers. Porter developed his Five Forces analysis in reaction to the then-popular SWOT analysis, which he found unrigorous and ad hoc.[1] Porter's five forces is based on the Structure-Conduct-Performance paradigm in industrial organizational economics. It has been applied to a diverse range of problems, from helping businesses become more profitable to helping governments stabilize industries.[2] Other Porter strategic frameworks include the value chain and the generic strategies. Five forces[edit] Threat of new entrants[edit] Profitable markets that yield high returns will attract new firms. Threat of substitute products or services[edit]

Rethinking the Role of Business Analysts: Towards Agile Business Analysts? The focus of this discussion is on business system analysts (BSAs) even though many of the issues (or flavors thereof) are pertinent to the other analyst types. BSAs typically have experience in a wide range of techniques, including interviewing, structured meeting approaches such as Joint Application Development (JAD), modeling sessions, and model reviews. Good BSAs have a good understanding of the business domain and are typically "people persons". 1. Why have many traditional organizations adopted the idea of having BSAs on staff? Developers can't elicit requirements. 2. A BSA on a traditional software development project will perform one or more of the following activities: Scope the system. 3. In theory the idea of having traditional BSAs involved with a project should work quite well, and in practice it often does. Clearly this was a step in the right direction. BSAs often lack the right skills. 4. How can BSAs become more effective? 5.

International Institute of Business Analysis | Home Analyzing & Visualizing Competition Posted on October 25th, 2010 in Charts and Graphs - 5 comments Analyzing competition is one of the key aspects of running a business. In this article, learn how to use Excel’s scatter plots to understand competition. How Mobile Handset Market Changed from 2007 to 2010? [view large] Recently, Kaiser at Junk Charts pointed to a very effective business chart that shows the dynamics of competitive land scape with ease. The chart shown aside originally appeared in Asymco, shows how mobile handset market has changed between 2007 & 2010. What is so special about this chart? I like this type of chart because it clearly tells the story of what happened in mobile handset market between 2007 and 2010. The chart instantly lets me ask important questions like, “So what did Nokia do wrong?” And that is what a chart should do. How to construct similar chart in Excel? Here is how you can construct similar business chart in excel. Step 1: Get your data Step 2: Re-arrange the data, so we get first and last values

Showing dynamics on a business chart Dave S. achieved a rare feat, which is to send in a great-looking set of charts. This post at Asymco is worth reading in its entirety; the author Horace discusses the process by which he worked through several charts, arriving at the one he's most happy with. The secret to the success here is the careful framing of the question, and the collection of the appropriate data to address that question. The question is the competition between wireless phone vendors in the last three years. It was established that the right way to view this competition is in two dimensions: share of revenues, and share of profits. Note the word "share". Needless to say, the raw data one would collect come from the financial statements of the eight individual vendors. Horace also avoided the plague of plotting all time-series data as line charts (similar to the plague of plotting all geographic data on maps). This is the final graph Horace landed on. I am not saying this is a bad chart.