19-Year-Old Student Develops Ocean Cleanup Array That Could Remove 7,250,000 Tons Of Plastic From the World's Oceans 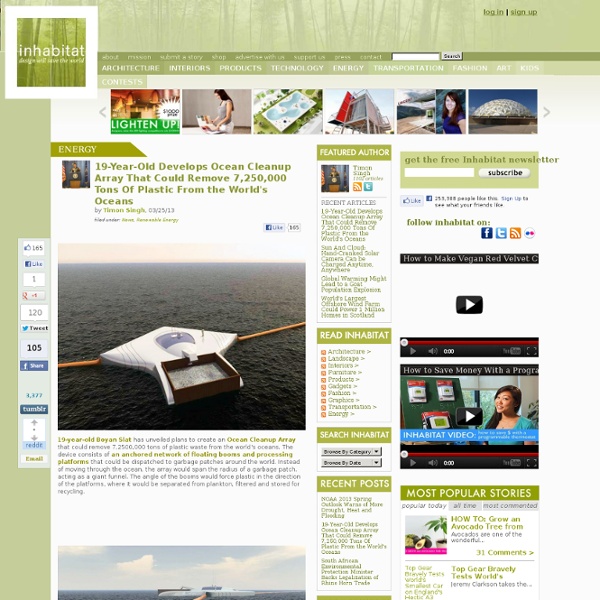 19-year-old Boyan Slat has unveiled plans to create an Ocean Cleanup Array that could remove 7,250,000 tons of plastic waste from the world’s oceans. The device consists of an anchored network of floating booms and processing platforms that could be dispatched to garbage patches around the world. Instead of moving through the ocean, the array would span the radius of a garbage patch, acting as a giant funnel. The angle of the booms would force plastic in the direction of the platforms, where it would be separated from plankton, filtered and stored for recycling. At school, Boyan Slat launched a project that analyzed the size and amount of plastic particles in the ocean’s garbage patches. His final paper went on to win several prizes, including Best Technical Design 2012 at the Delft University of Technology. Slat went on to found The Ocean Cleanup Foundation, a non-profit organization which is responsible for the development of his proposed technologies. + Boyan Slat

Bioengineers Build Open Source Language for Programming Cells Drew Endy wants to build a programming language for the body. Endy is the co-director of the International Open Facility Advancing Biotechnology — BIOFAB, for short — where he’s part of a team that’s developing a language that will use genetic data to actually program biological cells. That may seem like the stuff of science fiction, but the project is already underway, and the team intends to open source the language, so that other scientists can use it and modify it and perfect it. The effort is part of a sweeping movement to grab hold of our genetic data and directly improve the way our bodies behave — a process known as bioengineering. With the Supreme Court exploring whether genes can be patented, the bioengineering world is at crossroads, but scientists like Endy continue to push this technology forward. According to Ziv Bar-Joseph, a computational biologist at Carnegie Mellon University, gene expression isn’t that different from the way computing systems talk to each other.

Global warming predictions prove accurate Forecasts of global temperature rises over the past 15 years have proved remarkably accurate, new analysis of scientists' modelling of climate change shows. The debate around the accuracy of climate modelling and forecasting has been especially intense recently, due to suggestions that forecasts have exaggerated the warming observed so far – and therefore also the level warming that can be expected in the future. But the new research casts serious doubts on these claims, and should give a boost to confidence in scientific predictions of climate change.

Boyan Slat “Human history is basically a list of things that couldn't be done, and then were done.” Boyan Slat (Delft, 1994) combines environmentalism, creativity and technology to tackle global issues of sustainability. Currently working on oceanic plastic pollution, he believes current prevention measures will have to be supplemented by active removal of plastics in order to succeed. “It will be very hard to convince everyone in the world to handle their plastics responsibly, but what we humans are very good in, is inventing technical solutions to our problems. And that’s what we’re doing.” Besides leading The Ocean Cleanup, Boyan is an Aerospace Engineering student at the Delft University of Technology, and is an avid photographer and diver.

Star Trek-Inspired Wearable Communicator for iOS & Android by CommBadge Technologies, LLC Technology has finally caught up with the science fiction that was first imagined by Gene Roddenberry in 'Star Trek - The Next Generation'. Finally, there is a real CommBadge®, it's a miniature speakerphone with really big sound! Frankly, if you're like us, you really don't love wearing Bluetooth headsets. Most are uncomfortable and can be annoying, especially when worn for extended periods. CommBadge is a great Bluetooth headset substitute and much more. CommBadge supercharges Siri and Google Now. Artificial neural network An artificial neural network is an interconnected group of nodes, akin to the vast network of neurons in a brain. Here, each circular node represents an artificial neuron and an arrow represents a connection from the output of one neuron to the input of another. For example, a neural network for handwriting recognition is defined by a set of input neurons which may be activated by the pixels of an input image. After being weighted and transformed by a function (determined by the network's designer), the activations of these neurons are then passed on to other neurons. This process is repeated until finally, an output neuron is activated. This determines which character was read.

Economy, not climate, tops global worry list U. CHICAGO (US) — Concerns about the economy and health care rank higher than do worries about climate change worldwide, surveys show. Respondents from 33 countries were asked the relative importance of eight issues: health care, education, crime, the environment, immigration, the economy, terrorism, and poverty. People were five times more likely to point to the economy over the environment. Additionally, when asked about climate change, people identified the issue as more of a national problem than a personal concern. Luxor - World's First Digital Focusing Flashlight with OLED by PLX Devices Luxor can be ordered here at the end of this campaign. Luxor is the flashlight reinvented.

Why Computing Won't Be Limited By Moore's Law. Ever In less than 20 years, experts predict, we will reach the physical limit of how much processing capability can be squeezed out of silicon-based processors in the heart of our computing devices. But a recent scientific finding that could completely change the way we build computing devices may simply allow engineers to sidestep any obstacles. The breakthrough from materials scientists at IBM Research doesn't sound like a big deal. Markus Kayser Builds a Solar-Powered 3D Printer that Prints Glass from Sand and a Sun-Powered Cutter Industrial designer and tinkerer Markus Kayser spent the better part of a year building and experimenting with two fantastic devices that harness the sun’s power in some of the world’s harshest climates. The first he calls a Sun Cutter, a low-tech light cutter that uses a large ball lens to focus the sun’s rays onto a surface that’s moved by a cam-guided system. As the surface moves under the magnified light it cuts 2D components like a laser. The project was tested for the first time in August 2010 in the Egyptian desert and Kayser used thin plywood to create the parts for a few pairs of pretty sweet shades. But he didn’t stop there.

Our Climate Death Spiral: Charts, Maps & Graphs Edition By now you are likely aware that carbon dioxide levels have reached 400 parts per million in Earth's atmosphere . It's been three million years since that last happened, but there were no humans around then to endure the epic sea level rise, crazy droughts, hotter temps, and the mass swampification of once-arable land. Scientists are just as certain as ever that this is the case—a recent study revealed that 97% of scientific papers that tackle climate change confirm it's caused by human activity —but many people remain unconvinced. Maybe that's because words are often boring, and a lot of them are written on the internet, where it is especially easy not to believe things. Good thing then that we also have charts, visualizations, maps and graphs.

Luma: A SmartLamp for the 21st Century. by Wesley LaPorte & Dan Barnes Luma is a smart lamp for the 21st century. Charge your device, listen to music, make a call and set the mood all with this smart lamp controlled by your phone. It is perfect for your office, nursery, bedroom and home foyer. Backing our project will help us deliver a smart lamp at an affordable cost. How a Handful of Countries Control the Earth's Most Precious Materials To see a list of the raw materials that comprise a cell phone or a computer is to burrow to the planet's core. Some of the names are familiar -- gold, tin -- while others sound as exotic as the places from which they come -- tantalum, indium. As our gadget dependency grows, so does our appetite for these bits of Earth. In fact, demand for the 14 most-critical minerals for today's electronic technologies may as much as triple over the next 20 years, according to the European Commission. Myriad factors -- volatile markets, low substitution rates, export restrictions -- make some materials more precious than others. "The era of access to easy resources is over," says mining analyst Paul Bugala of Calvert Investments.

MIT Creates New Energy Source This is some pretty exciting news. It seems that researchers at the Massachusetts Institute of Technology (MIT), one of the most prestigious science and engineering schools in the United States, has created a new energy source -- and it's clean and renewable. The odd thing is that the only way you can see this energy source is with a very powerful microscope, because it is created by using nanotechnology. Science Committee Mark Stafford Smith - Chair Dr Mark Stafford Smith is the Science Director of CSIRO’s Climate Adaptation Flagship in Canberra, Australia, where he oversees a highly interdisciplinary programme of research on many aspects of adapting to climate change. He has more than 30 years experience in drylands systems ecology, management and policy, including senior roles such as Program Leader of CSIRO’s Centre for Arid Zone Research in Alice Springs, and then CEO of the Desert Knowledge Cooperative Research Centre.