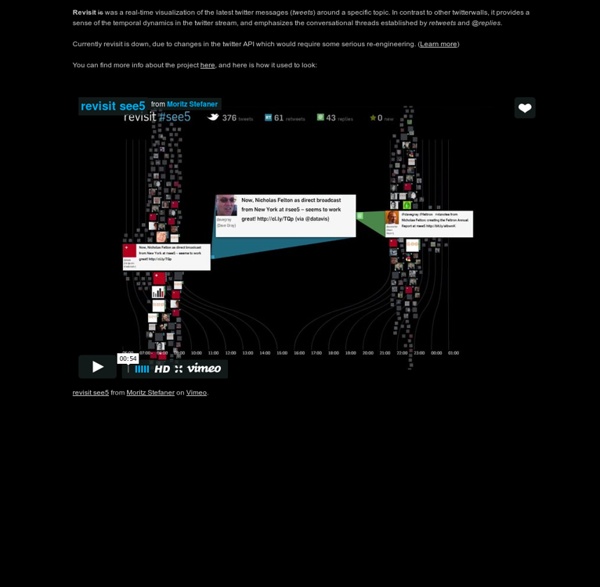 Wolfram|Alpha: Computational Knowledge Engine Twitter Hashtags 101: Complete Guide to Discovery and Power | Internet Media Labs Blog Twitter hashtags can connect you to people and conversations all over the world … Oh! The places you’ll go! The Hashtag: A Door to Discovery on Twitter It is hard to miss the # sign attached to keywords, acronyms and phrases in tweets on Twitter. Started as a way to create groupings on Twitter, hashtags are now a powerful convention for those looking to tag, find, mine and participate in conversations on Twitter. What is a hashtag? “The # symbol, called a hashtag, is used to mark keywords or topics in a Tweet. The Hashtag Conversation: Trending Topics and Twitter Chats On Twitter, you can find millions of tweets using hashtags. However, the real gold for Twitter conversations can be found on regularly scheduled and organized Twitter Chats for specific topics–some casual, but many, very smart and serious topics. By participating in Twitter Chat conversations, you can enhance your personal development, knowledge, network, health, business intelligence and even serendipity. 1. 2. 3.

Gephi, an open source graph visualization and manipulation software Welcome to Beepmo Screensaver - visualizing the global blogosphere Twingly Screensaver Beta Twingly screensaver is visualizing the global blog activity in real time. Forget RSS readers where you see only what you're interested in. With Twingly screensaver you get a 24/7 stream of all (viewer discretion advised) blog activity, straight to your screen. To use the screensaver you need a PC with Windows and a graphics card supporting OpenGL. How to install: Download the installation files by clicking the download button. To use Twingly as the system screensaver: Right click the desktop.

Web Trend Map 4 by Oliver Reichenstein The has been featured all across the web from TechCrunch to BoingBoing, and Gawker. Now the latest version of our popular Web Trend Map is up for grabs.—The Web Trend Map plots the Internet’s leading names and domains onto the Tokyo Metro map. Domains and personalities are carefully selected through dialogue with map enthusiasts, and every domain is evaluated based on traffic, revenue, and character. Sold out – Sorry, the Web Trend Map 4 is no longer available. We grouped together closely associated websites, ensuring that every domain is on an appropriate line. The map has been printed by the same printer that prints Apple’s ads in Japan, so you can be sure its handled by the best. Blockbuster Files for Bankruptcy ❤ Cartoon By Published:23-Sep-10Posted in: Digital Painting, Editorial Cartoon -World News, Entertainment Cartoons, Pen and Ink Cartoons More Cartoons Like This: Detroit Files For Bankruptcy Detroit Files For Bankruptcy Detroit officially filed for bankruptcy,...Egyptian People Fight Back With Facebook and Twitter See all Bryant’s “Crisis in Egypt” Political Cartoons Collection Egyptian...Twitter turns 5 Years Old-Communication Never the Same Twitter turns 5 Years Old-Communication Never the Same For...Facebook Changes Format – Cartoon Facebook Changes Format – Cartoon “CURSE YOU FACEBOOK! I’m...Back to School Cartoon – Twitter and Ipad Cartoon Back to School Cartoon – Twitter and Ipad Cartoon... Two Blockbuster employees contemplate the closing of Blockbuster Video Stores and bankruptcy proceedings. More Cartoons in this Category:

Mapping the Internet The increased use of peer-to-peer communications could improve the overall capacity of the Internet and make it run much more smoothly. That’s the conclusion of a novel study mapping the structure of the Internet. It’s the first study to look at how the Internet is organized in terms of function, as well as how it’s connected, says Shai Carmi, a physicist who took part in the research at the Bar Ilan University, in Israel. “This gives the most complete picture of the Internet available today,” he says. While efforts have been made previously to plot the topological structure in terms of the connections between Internet nodes–computer networks or Internet Service Providers that act as relay stations for carrying information about the Net–none have taken into account the role that these connections play. “Some nodes may not be as important as other nodes,” says Carmi. With the core connected, any node is able to communicate with any other node within about four links.

ANZ Privately Owned Business Barometer 2011 Growth is knocking at the door, how will you answer? The vast majority of respondents to this year's ANZ Privately-Owned Business Barometer expect to prosper over the next 12 months, and even more are confident about the next three years. The question is, how will that optimism be converted to sustainable growth? That is, growth that provides benefits both now and in the long run? This year's ANZ Barometer holds three distinctive keys for business owners wanting to build a sustainable growth platform. For small-to-medium and commercial businesses, these include: Scale and collaboration Inspiration and planning Investment. For agribusiness and farmers, these include: Profitability and scale People and planning Investment. To find out how these keys can help you unlock the real benefit that growth brings, download one of the Key Insight reports below: ANZ Privately-Owned Business Barometer events Contact us You need Adobe Reader to view PDF files.

mkweb.bcgsc.ca/schemaball/?home Schemaball is a flexible schema visualizer for SQL databases. The purpose of Schemaball is to help visualize the relationships between tables. Tables are related by foreign keys, which are fields which store the value of a record field from another table. Figure | A MySQL schema of our sequencing LIMS database. Schemaball produces images called schema balls. Schemaball is free software, licensed under GPL. I am not longer actively working on Schemaball. Schemaball was published in SysAdmin Magazine (Krzywinski, M. I've since been using the circular composition form in my Circos project, which applies this layout to visualizing genomes (Circos is particularly popular in the field of comparative genomes, in which relationships between two or more genomes are analyzed and displayed). Ensembl balls!

How technology is transforming events One of my speaking bureau just asked me to provide them with a few quick ideas on how technology is changing events, as one of their key clients is having an internal meeting to discuss their future use of technology in events. I only had 10 minutes free to write something, so it’s far from comprehensive, but I thought worth sharing here. After events: - Social networking and discussions among people attending the event - Access to video and other event content - Run and track initiatives generated from the event - Suggestions for next events As I was looking for the links above, I was interested to see that introNetworks has morphed from an events platform to an enterprise platform that helps employees to make useful internal connections, including integration into SocialText. I was also saddened to see that the excellent nTag meeting serendipity enhancer, that I first wrote about in 2002, is now defunct.