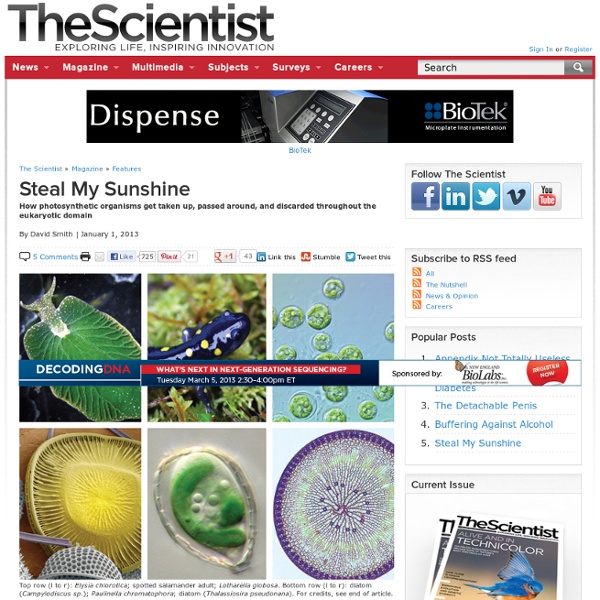 Top row (l to r): Elysia chlorotica; spotted salamander adult; Lotharella globosa. Bottom row (l to r): diatom (Campylodiscus sp.); Paulinella chromatophora; diatom (Thalassiosira pseudonana). For credits, see end of article. Our world is swarming with symbioses. Sea anemones and clownfish, land plants and mycorrhizal fungi, rays and remora cleaner fish, corals and algae. Among the more profitable endosymbioses is one that allows the host to derive energy from sunlight. Catch me if you can The genesis of plastids follows a straightforward and generally agreed-upon plot: about 1.5 billion years ago, a heterotrophic eukaryote, which gained energy by consuming and digesting organic compounds, swallowed and retained a free-living photosynthetic cyanobacterium. Once established in the Archaeplastida, plastids spread laterally to remote lineages through “secondary” endosymbioses, in which a nonphotosynthetic eukaryote engulfs and retains a eukaryote containing a primary plastid. Moving in 1.

This Micro-Algae Lamp Absorbs 150-200 Times More CO2 than a Tree! (Video) CleanTechnica/via French biochemist and Shamengo pioneer Pierre Calleja has invented this impressive streetlight that is powered by algae which absorbs CO2 from the air. We have featured algae-powered lamps before but this one takes out 1 ton (!) of CO2 per year. This is as much CO2 as as a tree absorbs on average during its entire life. It seems to me that this is a pretty amazing idea that could really work and clean the air pollution from urban areas (like parking lots, tested in the video above) and at the same time look good. See also: Favorite Nature Spots of the TreeHugger Team (Part 1 of 2)

Bioluminescence in the Gippsland Lakes | Phil Hart These pictures of bioluminescence in the Gippsland Lakes in my gallery have proven quite popular, so it seems time to provide a story to accompany them. But this is not a short story, rather a convoluted one of fires and floods, of microscopic algae and the inspiring, remarkable and surprising beauty of nature. The story begins with alpine bushfires in Victoria, which started on 1st December 2006 when over 70 fires were started by a band of thunderstorms and lightning strikes which moved across the state. Smoke from the Great Divide Complex fire spreading over south-east Australia [MODIS image via Romsey Weather Site] These fires burnt a vast area of the catchment for the Gippsland Lakes, a chain of large inland lakes in eastern Victoria. In the end, it was not any ordinary rainfall event that arrived that winter. Floodwaters around Bairnsdale, East Gippsland in June 2007 Floodwaters over Glenmaggie Weir [ABC Australia] Synechococcus in the Gippsland Lakes

Know the signs of paleontology. I must die now. Farewell... Black people problems. Joking around in class will get you nowhere in life. A new drinking game... Watching my parents use the computer. Results are in: Publications Given the central role of scientific research in MRF, we have created a section for all of the peer reviewed scientific papers produced by MRF staff or papers using MRF material. Many MRF volunteers helped excavate many of the localities that are now being published on. There is a brief summary of each paper. A pdf of the paper can be downloaded by clicking on the reference. Click on an item to read the full paper. A New Large-Bodied Oviraptorosaurian Theropod Dinosaur from the Latest Cretaceous of Western North AmericaPLOS ONE (2014)Matthew C. We examine patterns of occurrence of associated dinosaur specimens (n = 343) from the North American Upper Cretaceous Hell Creek Formation and equivalent beds, by comparing their relative abundance in sandstone and mudstone.Transitional fossils and the origin of turtlesBiology Letters (2010)Tyler R.

conservation biology It’s interesting when a semi-random tweet by a colleague ends up mobilising a small army of scientists to get pissed off enough to co-write an article. Euan Ritchie of Deakin University started it off, and quickly recruited me, Mick McCarthy, David Watson, Ian Lunt, Hugh Possingham, Bill Laurance and Emma Johnston to put together the article. It’s a hugely important topic, so I hope it generates a lot of discussion and finally, some bloody action to stop the rapid destruction of this country’s national parks system. Note: Published simultaneously on The Conversation. It’s make or break time for Australia’s national parks. National parks on land and in the ocean are dying a death of a thousand cuts, in the form of bullets, hooks, hotels, logging concessions and grazing licences. Australia’s first “National Park”, established in 1879, was akin to a glorified country club. In Victoria, new rules will allow developers to build hotels and other ventures in national parks. Like this:

ScienceDebate 2012 | Home A brand new type of rock has formed from our plastic waste Scientists have announced the existence of a new, trash-based rock type: plastiglomerate. The new type of material will stay in the Earth’s rock record forever, according to a new study, and will one day act as a geological marker for humanity’s impact on the planet. The research from the University of Western Ontario in Canada has revealed plastiglomerates form when melted plastic rubbish on beaches mixes with sediment, lava fragments and organic debris to produce a whole new type of rock. So far the material has only been found at Hawaii’s Kamilo beach, which is considered one of the dirtiest in the world, but the unique geological material likely exists in many other locations, as Joseph Castro reports for LiveScience. Research on the plastiglomerates from Kamilo Beach have found there are two types: In situ and clastic. The results are published in GSA Today. It’s not great news, especially given the fact today is World Environment Day.

European Herbal & Traditional Medicine Practitioners Association European Herbal & Traditional Medicine Practitioners Association Representing Herbal & Traditional Medicine Practitioners Across Europe Herbal medicine is among the most ancient forms of treatment known and the medicinal use of plants is common to all cultures and peoples of the world. The Egyptian Ebers Papyrus, dating back to 1500 BCE, describes more than 700 herbal remedies including aloes, caraway seeds, castor oil and squill. The medicine of medieval Europe was significantly advanced by herbal skills brought back to Europe by the Crusaders who learnt their medicine from their Arab adversaries who had themselves synthesised the knowledge of ancient Greek and Persian medicine. For many centuries plant remedies were the main medicines used to treat disease throughout Europe and many famous herbals were published in English in the 16th and 17th centuries. "Advantages have accrued to medicine from chemical preparations.

Blood Types Chart | Blood Group Information | American Red Cross Although all blood is made of the same basic elements, not all blood is alike. In fact, there are eight different common blood types, which are determined by the presence or absence of certain antigens – substances that can trigger an immune response if they are foreign to the body. Since some antigens can trigger a patient's immune system to attack the transfused blood, safe blood transfusions depend on careful blood typing and cross-matching. The ABO Blood Group System There are four major blood groups determined by the presence or absence of two antigens – A and B – on the surface of red blood cells: Group A – has only the A antigen on red cells (and B antibody in the plasma)Group B – has only the B antigen on red cells (and A antibody in the plasma)Group AB – has both A and B antigens on red cells (but neither A nor B antibody in the plasma)Group O – has neither A nor B antigens on red cells (but both A and B antibody are in the plasma) Blood Types and the Population It’s inherited.

Torrefaction – A New Process In Biomass and Biofuels Nov November 19, 2008 | 15 Comments Torrefaction is a thermo-chemical treatment of biomass in the 200 to 340 degrees Celsius range. In this process the biomass partly (especially the hemi-cellulose) decomposes, giving off various types of volatiles. Annually, photosynthesis is said to store 5-8 times more energy in biomass than humanity currently consumes from all sources. Higher temperature gasification of biomass began in about 1800 and by about 1850 gas lighting for streets was commonplace. With long experience with biomass gasifiers, reliable and large-scale operations continue to suffer from several problems. The gas clean-up problems would be largely avoided if biomass were gasified in an entrained flow or flame gasifiers used elevated temperatures up to 1700°C. Torrefaction of biomass is being researched and developed as a certain amount of the energy potential previously fixed by biomass photosynthesis decreases with every conversion step. In the U.S.