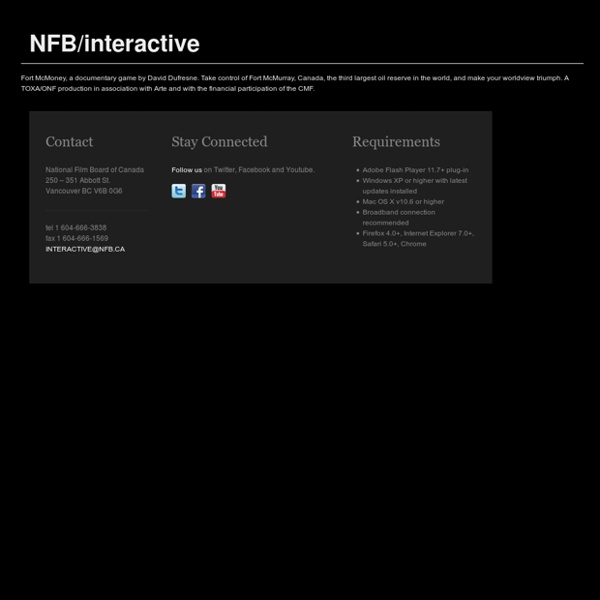 Fort McMoney, a documentary game by David Dufresne. Take control of Fort McMurray, Canada, the third largest oil reserve in the world, and make your worldview triumph. A TOXA/ONF production in association with Arte and with the financial participation of the CMF. Experience innovative interactive documentaries, videos, and animations that thoughtfully explore relevant issues and unique Canadian perspectives. But first you need Adobe Flash® Player 11.7. Download and install Adobe Flash® Player now.

tweet seats – the public theater live tweets the gob squad Last week, I participated in a new grand experiment recently popping up in theatrical Petri dishes all over the country. I was a tweet seater. Or, I live tweeted Gob Squad’s Kitchen (You’ve Never Had It So Good) at The Public Theater. Gob Squad’s Kitchen (You’ve Never Had It So Good) photo by David Baltzer It was the first time The Public offered seats to Twitter users for the purpose of sharing thoughts about a play in 140 characters or less. The designated tweeters sat in the last three rows to minimize disturbing other audience members, and the theater gave us a number of rules to observe during the performance: No phone calls, dim your screens, no photographs (this was lifted moments before curtain, and several people did tweet pictures).

12 wonderful examples of immersive online storytelling In the late 1990s the Philadelphia Inquirer published a series on “the dramatic raid of Mogadishu”. It evolved into a book and a movie called, as you may have already guessed, ‘Black Hawk Down’. The initial extended feature first made its debut in print, and was then pushed onto the website, where video, audio, maps, photos and related links helped bring the story to life. The site, which is still available online, looks like this: This was one of the first mainstream media attempts to use the web to enhance long form content, and while the page might not look terribly pretty, all of the right kind of functionality is there.

Futures of Entertainment: Archives For more than a year now, I've written about taking a transmedia approach to journalism and how that approach can be best accomplished. I'm not talking in this sense about giving conglomerates the chance to squeeze more blood from the stone, to get three times as much work from half as many journalists, or else the myth of the uberjournalist, where one person should be sent into the field to take the pictures, do the story, get video, and then come back to write the story, publish the photographs, put the video up on the Web, appear on the TV station, and so on. Instead, what I mean is finding the best platform possible to tell the story in, to use each medium to its strengths.

Life is a game. This is your strategy guide 674k shares Share on Facebook Share on Twitter Real life is the game that – literally – everyone is playing. But it can be tough. This is your guide. Basics You might not realise, but real life is a game of strategy. 21+ Honest Valentine’s Day Cards For Unconventional Romantics Most of us have had enough of the typical Hallmark-style Valentine's Day card (not that there's anything wrong with them). For couples and romantic singles with a sense of humor or an unconventional approach to romance, there are fun and creative cards like these! Sure, some of them might not be the most romantic cards out there, but you've got to give them to the right person for them to be effective. If there's a pant-nullifying Valentine's Day card that you think we've missed, you can add it to this list and vote for your favorites as well! (h/t: huffpost)

Karen Karen is a life coach and she’s happy to help you work through a few things in your life. You interact with Karen through an app. When you begin, she asks you some questions about your outlook on the world to get an understanding of you. In fact, her questions are drawn from psychological profiling questionnaires. She – and the software – are profiling you and she gives you advice based on your answers. Over the next week you have calls with Karen once or twice a day. Website Receives RTDNA’s 2013 Edward R. Murrow Award We are honored to announce that MediaStorm has been recognized by the Radio Television Digital News Association (RTDNA) as a winner of a 2013 National Edward R. Murrow Award in the category of Website by a National Online News Organization. RTDNA is the world’s largest professional organization devoted exclusively to electronic journalism, representing local and network journalists in broadcasting, cable and digital media in more than 30 countries. The Edward R. Murrow Awards has honored work of the highest quality produced by radio, television and online news organizations around the world since 1971.

Transmedia Journalism Principles Jump to: Previous Page: “Where Journalism Has Gone Before”Spreadable | DrillableContinuous and SerialDiverse and Personal in ViewpointImmersive | ExtractableOf Real Worlds | Inspiring to Action Next page: Building Transmedia Journalism “There are no new ideas in the world. Only a new arrangement of things.” — Henri Cartier-Bresson What is 3D GameLab? - 3D GameLab 3D GameLab™ is a gamified content creation and student tracking platform where teachers can design and share quests and badges to create personalized learning for their students. Students “level up” through the curriculum, choose quests they want to play, and earn experience points, badges, and awards. Quests can be aligned to standards, including Common Core and NGSS, for real-time achievement reporting. Class is literally turned into a game, providing the opportunity for true mastery learning. Includes monthly professional development on gamification and tech integration strategies.

The REAL Meanings Of Some Words Every word has a definition, but they aren't always what we mean when we say them. For example, I might have said "I'll do that right away, honey," but what I really meant was, "I will forget whatever you asked me to do the moment this show ends." This fun series of images shows us what some of us really mean when we use some of these simple, everyday words. Do you have any real-life word definitions of your own? If so, feel free to add them to this list!

Operation Ajax “One of the coolest media experiences I’ve seen on the iPad.” New York Times “You can just see the story. You can dig down deeper and see the actual CIA documents. You can identify with people in it. And you can learn about a fledgeling democracy.” Crossmedia Cross Media (also known as cross-media, cross-media entertainment, cross-media communication, transmedia) is a media property, service, story or experience distributed across media platforms using a variety of media forms. It refers to the journey or linkages across devices and through forms and is most evident in branded entertainment, advertising, games and quest based forms such as Alternate Reality Games where there are a range of dependencies between the media placed across devices and fragments there-of. There are potentially four main categories[1] or levels of cross-media: Interaction[edit] Cross-media communications are integrated, interactive experiences that occur across multiple media, with multiple authors and have multiple styles.