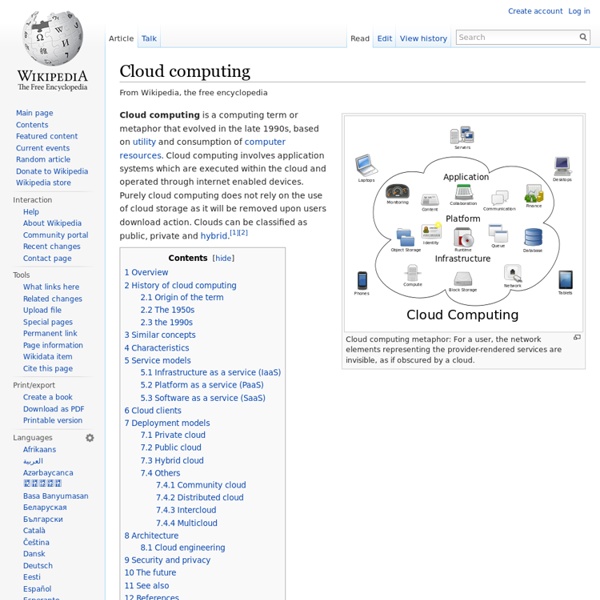 Cloud computing metaphor: For a user, the network elements representing the provider-rendered services are invisible, as if obscured by a cloud. Cloud computing is a computing term or metaphor that evolved in the late 1990s, based on utility and consumption of computer resources. Cloud computing involves application systems which are executed within the cloud and operated through internet enabled devices. Purely cloud computing does not rely on the use of cloud storage as it will be removed upon users download action. Clouds can be classified as public, private and hybrid.[1][2] Overview[edit] Cloud computing[3] relies on sharing of resources to achieve coherence and economies of scale, similar to a utility (like the electricity grid) over a network.[2] At the foundation of cloud computing is the broader concept of converged infrastructure and shared services. Cloud computing, or in simpler shorthand just "the cloud", also focuses on maximizing the effectiveness of the shared resources.

TVPDesign Teams TVPDesign Teams are for Scientific & Technical Professionals who wish to get involved in design-related TVP projects to aid the implementation of The Venus Project as directed by Jacque Fresco. Those working within these teams do so as volunteers for The Venus Project. All designs by Jacque Fresco are protected by copyright, therefore volunteers are required to sign a non disclosure agreement (NDA). If you would like to find out more about our TVPSupport Teams which are international groups aimed at promoting the The Venus Project in their local communities and creating supportive media [ Click here ] A security event description of intelligent applications in edge-cloud environment (1) Attack Trees Analysis (ATA). ATA is an analytical method for exploiting system weaknesses from the perspective of an attacker [25]. It uses the tree structure to describe the possible attacks on the system.

Awesome cloud computing infographic Cloud computing spending will account for 25% of annual IT expenditure growth by 2012 and nearly a third of the growth the following year. “The battle for Cloud dominance is heating up, with the release of Office 365, it will be very interesting to see where the next big play comes from.” The Cloud has been around for a little while now. The development of the cloud has taken place over the last few years, led in the most part by Google’s innovations in Email, Document storage Cloud Apps and their SharePoint Alternative in Google Sites. The competition has been growing with more and more Cloud providers flooding the market in various guises.

Virtual machine A virtual machine (VM) is a software-based emulation of a computer. Virtual machines operate based on the computer architecture and functions of a real or hypothetical computer. Definitions[edit] A virtual machine (VM) is a software implementation of a machine (e.g., a computer) that executes programs like a physical machine. PhoneGap PhoneGap is a mobile development framework produced by Nitobi, purchased by Adobe Systems in 2011.[3][4] It enables software programmers to build applications for mobile devices using JavaScript, HTML5, and CSS3, instead of device-specific languages such as Objective-C.[5] The resulting applications are hybrid, meaning that they are neither truly native (because all layout rendering is done via web views instead of the platform's native UI framework) nor purely web-based (because they are not just web apps, but are packaged as apps for distribution and have access to native device APIs). From version 1.9 onward it is even possible to freely mix native and hybrid code snippets. The software underlying PhoneGap is Apache Cordova.[6] The software was previously called just "PhoneGap", then "Apache Callback".[7][8] Apache Cordova is open source software. History[edit]

The World’s First 3D-Printed Building Will Arrive In 2014 (And It Looks Awesome) Sure, 3D printing is fun and cute. And products like the Makerbot and Form 1 will most certainly disrupt manufacturing, even if it’s only on a small scale. But the possibilities of 3D printing stretch far beyond DIY at-home projects. In fact, it could entirely replace the construction industry. We’ve already seen folks at MIT’s Research Labs working on ways to 3D print the frame of a home in a day, as opposed to the month it would take a construction crew to do the same.

Two-level fuzzy-neural load distribution strategy in cloud-based web system The main aim of the proposed Web switch is to distribute HTTP requests to minimize service time for each request. Service times are measured from the moment the Web switch sends a request to the chosen server to the moment the Web switch receives the response. The Web switch is processing requests in the order in which they are received. 10 Cloud Predictions for 2011 from Forrester's James Staten - ReadWriteCloud Forrester analyst James Staten has compiled his list of ten cloud computing (or, more specifically, infrastructure-as-a-service) predictions for 2011. Staten sees hosted private clouds and community clouds being increasingly important, cloud computing costs being driven down, and a widening gap between those that take advantage of cloud computing and those that don't. IaaS is one of the 15 technologies listed in the Top 15 Technology Trends EA Should Watch_2011 To 2013 report released last month, and this blog post by Staten drills deeper into the subject. And The Empowered Shall Lead UsYou will build a private cloud, and it will fail. And this is a good thing.Hosted private clouds will outnumber internal clouds 3:1Community clouds will arrive, thank to complianceWorkstation applications will bring HPC to the massesCloud economics gets switched on.

Service-oriented architecture See also the client-server model, a progenitor concept A Service-Oriented Architecture (SOA) is a design pattern in which software/application components provide services to other software/application components via a protocol, typically over a network and in a loosely-coupled way. The principles of service-orientation are independent of any vendor, product or technology.[1] Android (operating system) Free and open-source operating system for mobile devices, developed by Google Initially developed by Android Inc., which Google bought in 2005, Android was unveiled in 2007, with the first commercial Android device launched in September 2008. The current stable version is Android 10, released on September 3, 2019. The core Android source code is known as Android Open Source Project (AOSP), which is primarily licensed under the Apache License. This has allowed variants of Android to be developed on a range of other electronics, such as game consoles, digital cameras, PCs and others, each with a specialized user interface. Some well known derivatives include Android TV for televisions and Wear OS for wearables, both developed by Google.

Printable Houses and the Massive Wave of Opportunity it will bring to Our Future All the way back in March of 2004, working in his laboratory at the University of Southern California in San Diego, Dr. Behrokh Khoshnevis, was working with a new process he had invented called Contour Crafting to construct the world’s first 3D printed wall. His goal was to use the technology for rapid home construction as a way to rebuild after natural disasters, like the devastating earthquakes that had recently occurred in his home country of Iran.

CNN based lane detection with instance segmentation in edge-cloud computing Binary segmentation In lane detection, in order to save computing resources, we binarize the image. The segmented branch of the two-branch network outputs a binary segmentation map, which divides the lane line and non-lane line parts. In this paper, all ground-level car-to-car points are connected together to form the connecting line of each lane to avoid situations where lane lines are unpredictable due to lane line degradation or road obstacles blocking the lane lines. At the same time, due to the high imbalance between lane and background, we use bounded inverse class weighting for lane pixel segmentation.

40 percent of companies have no cloud computing plans November 16, 2010, 2:31 PM — Forty percent of companies are still to be convinced of the benefits of cloud and have no plans to adopt such a service. That's according to a survey from Quest Software, which also found that the need to reduce costs was still the main driver for those companies that have adopted cloud services. When it comes to which virtualisation platform is being employed, Quest found that VMware is still the dominant vendor with 93% (of IT managers surveyed using it - Microsoft's Hyper-V is yet to penetrate in a big way with just 27% of IT organisations opting for it. Citrix is lagging behind in third place with 21% of organisations using it. However, desktop virtualisation was being used by just 46% of respondents. Quest Software has used the results of its survey to make 11 predictions on the way that the cloud market will shape up in 2011.

cloud computing: A computing model that makes IT resources such as servers, middleware, and applications available as services to business organizations in a self-service manner. Found in: Hurwitz, J., Nugent, A., Halper, F. & Kaufman, M. (2013) Big Data For Dummies. Hoboken, New Jersey, United States of America: For Dummies. ISBN: 9781118504222. by raviii Dec 31