Forget tapering, emerging markets need to watch the wages. It's partly why the bank doesn't expect the underperformance of emerging market equities to reverse anytime soon, despite significant valuation discounts compared with their developed-market peers. 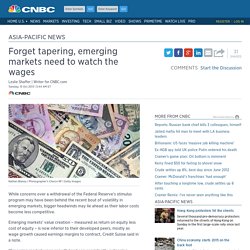 "We are not yet satisfied that it is sufficient to tempt global equity investors back into emerging markets given that the consensus 12-month forward earnings growth outlook is the same magnitude for both regions at 11 percent," it said. Others have also noted emerging market competitiveness may be slipping. (Read More: Some Manufacturers Say 'Adios' to China) "Rebounding demand in the U.S., Japan, and Europe has so far failed to translate into convincingly stronger shipments from Asia," noted Frederic Neumann, co-head of Asian economics research at HSBC, in a note. Local Gov't Debt Nears 20 Tln Yuan, CASS Says The Chinese Academy of Social Sciences said in a report published on December 23 that the amount of local government debt at the end of 2012 was 19.94 trillion yuan. 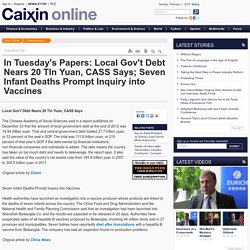 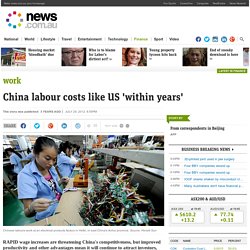 Source: Herald Sun RAPID wage increases are threatening China's competitiveness, but improved productivity and other advantages mean it will continue to attract investors, analysts say. Labour costs in China would match those of the United States within four years, catching up with eurozone countries in five years and with Japan in seven, the French bank Natixis forecast in a study last month. China "will soon no longer be a competitive place for production given the strong rise in the cost of production", the bank said. China labour costs soar as wages rise 22% - FT.com. Labor participation rate also falling in China 21 January 2014. China’s working-age population continued to shrink in 2013Suggests that labor shortages will further drive up wages in the years ahead From the National Bureau of Statistics on Monday: The working-age population (between 16 and 59) was 920 million in 2013, down 2.4 million from a year earlierAccounts for 67.6% of the total population. 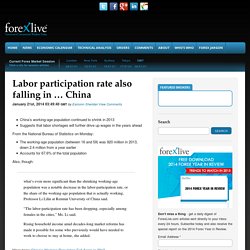 Indonesian Employers Seek to Curb Wage Gains as Costs Climb - Bloomberg. June 4 (Bloomberg) -- Indonesia’s main employer group is seeking to cap wage gains well below what authorities and unions have sought in recent years, raising the risk of labor disputes that would test the country’s next leader. 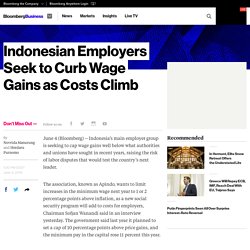 The association, known as Apindo, wants to limit increases in the minimum wage next year to 1 or 2 percentage points above inflation, as a new social security program will add to costs for employers, Chairman Sofjan Wanandi said in an interview yesterday. The government said last year it planned to set a cap of 10 percentage points above price gains, and the minimum pay in the capital rose 11 percent this year.

The country’s next president will take the reins of Southeast Asia’s largest economy in October, with annual wage negotiations usually due to be concluded in the final quarter. Job Cuts Last year saw minimum wage gains of 44 percent in Jakarta, leading employers to cut 200,000 jobs, Wanandi said. Singaporeans, The Truth About Our Wages Revealed. The Ministry of Trade and Industry (MIT) wrote to The Straits Times Forum to say that, “the Government’s aim is to create good jobs for Singaporeans by building a competitive and vibrant economy, with productivity as a key driver.” 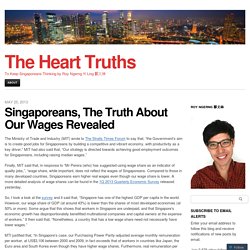 MIT had also said that, “Our strategy is directed towards achieving good employment outcomes for Singaporeans, including raising median wages.” Finally, MIT said that, in response to “Mr Perera (who) has suggested using wage share as an indicator of quality jobs,”, “wage share, while important, does not reflect the wages of Singaporeans. Compared to those in many developed countries, Singaporeans earn higher real wages even though our wage share is lower. A more detailed analysis of wage shares can be found in the 1Q 2013 Quarterly Economic Survey released yesterday. So, I took a look at the survey and it said that, “Singapore has one of the highest GDP per capita in the world. Singapore Wages May Worsen Fastest Rich-World Inflation: Economy - Bloomber. 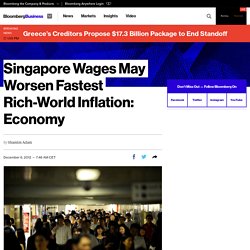 Getting rid of the soaring prices that are emboldening calls for higher wages won’t be as easy. Rising housing, transportation and business costs have given the city state the fastest inflation among the developed world’s biggest economies. The illegal protest by the SMRT Corp. drivers in late November may herald a further escalation in price pressures, as even foreign laborers whose cheaper wages have helped restrain inflation express dissatisfaction with their incomes. “All price go up, only salary no up,” Delowar Hussin, a Bangladeshi laborer, said as he hauled a bag of concrete debris into a dumpster outside a Singapore office tower housing Morgan Stanley and Citigroup Inc. Asia Soaring Wages Mean Rising Prices Worldwide - Bloomberg. 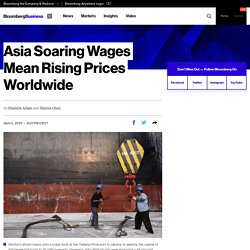 Executive Director Ernie Koh has a message for clients in 50 countries who complain about the Singapore-based furniture maker’s first price increase in two years: Take it or leave it. Koda’s factories in China, Malaysia and Vietnam are battling rising costs as governments in Asia increase minimum wages to curb discontent over a widening wealth gap.

While weak global growth and increased competition limited the ability of producers to raise prices during the past five years, Koh says they can’t go on absorbing the additional expenses. “We aren’t even passing on the full costs,” said Koh, who counts U.S. retailer Williams-Sonoma Inc., owner of Pottery Barn, and Cost Plus Inc. among customers. Wage levels in China have increased continually over the last two decades as the economy has developed and the private sector has created new employment opportunities. 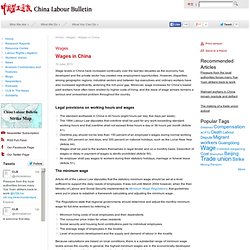 However, disparities among geographic regions, industrial sectors and between top executives and ordinary workers have also increased significantly, widening the rich-poor gap. Moreover, wage increases for China’s lowest paid workers have often been eroded by higher costs of living, and the issue of wage arrears remains a serious and unresolved problem throughout the country. Legal provisions on working hours and wages. China labour costs like US 'within years' Lower bonus, pay rise for private sector, says survey - General - New Strai.