While Jewish DPs languished, Nazi criminals given refuge by US. NEW YORK — In the waning days of World War II, Waffen SS general Karl Wolff, made a deal with the American intelligence operative Allen Dulles that he would surrender his men in Northern Italy in exchange for immunity from war crimes. 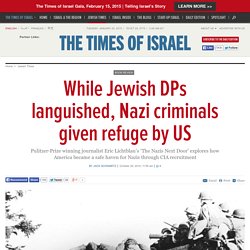 With the imminent collapse of the Third Reich, Wolff had more to gain from this understanding than Washington, but Dulles kept his promise, protecting Wolff from prosecutors at Nuremberg. Get The Times of Israel's Daily Edition by email and never miss our top stories Free Sign up! This was the beginning of a dutiful friendship, not just between these two men but among the interests they represented. It serves as prologue to “The Nazis Next Door,” (Houghton Mifflin Harcourt, 2014, $28) Eric Lichtblau’s riveting account of how America became a refuge for war criminals with the collusion of US agencies who recruited them for the Cold War and then sought to insulate them from justice. Eric Lichtblau (screen capture: Democracy Now) For Jews, a very different fate. Newsweek. Eric Lichtblau: "The Nazis Next Door" Part 2: Eric Lichtblau on "The Nazis Next Door: How America Became a Safe Haven for Hitler’s Men" 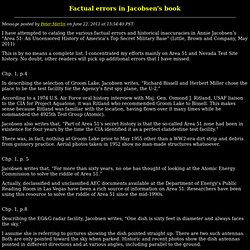 I concentrated my efforts mainly on Area 51 and Nevada Test Site history. No doubt, other readers will pick up additional errors that I have missed. Chp. 1, p.4 In describing the selection of Groom Lake, Jacobsen writes, “Richard Bissell and Herbert Miller chose the place to be the test facility for the Agency’s first spy plane, the U-2.” According to a 1974 U.S. Jacobsen also writes that, “Part of Area 51’s secret history is that the so-called Area 51 zone had been in existence for four years by the time the CIA identified it as a perfect clandestine test facility.” 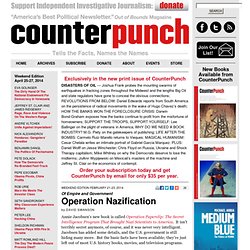 It isn’t terribly secret anymore, of course, and it was never very intelligent. Jacobsen has added some details, and the U.S. government is still hiding many more. But the basic facts have been available; they’re just left out of most U.S. history books, movies, and television programs. After World War II, the U.S. military hired sixteen hundred former Nazi scientists and doctors, including some of Adolf Hitler’s closest collaborators, including men responsible for murder, slavery, and human experimentation, including men convicted of war crimes, men acquitted of war crimes, and men who never stood trial.

'Area 51,' by Annie Jacobsen. Area 51 An Uncensored History of America's Top Secret Military Base By Annie Jacobsen (Little, Brown; 523 pages; $27.99) Out in a remote expanse of the Nevada desert, a few hours' drive from Las Vegas, lies a vast area of government-owned restricted land where the military and the CIA have conducted a lot of very secret tests since the end of World War II. 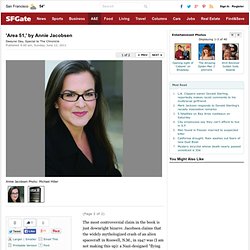 Now, Annie Jacobsen, a contributing editor at the Los Angeles Times Magazine, has written "Area 51," a deeply flawed, amateurish and at times downright nutty book about it. Area 51 acknowledged by CIA in declassified U 2 spy plane documents. Operation Paperclip: How Nazi Scientists Lived And Worked In America. Nazi scientists living and working in the US–all with the approval of top American military officials? 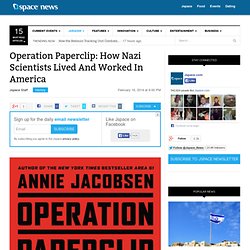 Those are some of the rather shocking revelations found in Annie Jacobsen’s new book, “Operation Paperclip: The Secret Intelligence Program to Bring Nazi Scientists to America.” “Under Operation Paperclip, which began in May of 1945, the scientists who helped the Third Reich wage war continued their weapons-related work for the US government, developing rockets, chemical and biological weapons, aviation and space medicine (for enhancing military pilot and astronaut performance), and many other armaments at a feverish and paranoid pace that came to define the Cold War,” Jacobsen writes in the book, according to Haaretz. In return, these Third Reich researchers helped develop various military technologies and weapons, including the potential use of poisonous or mind-altering drugs such as Lysergic acid diethylamide (LSD), reports Ynet.

What Cold War CIA Interrogators Learned from the Nazis. It was 1946 and World War II had ended less than one year before. 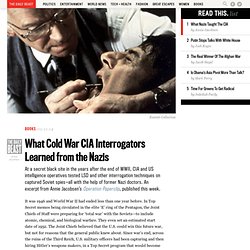 In Top Secret memos being circulated in the elite ‘E’ ring of the Pentagon, the Joint Chiefs of Staff were preparing for ‘total war’ with the Soviets—to include atomic, chemical, and biological warfare. They even set an estimated start date of 1952. The Joint Chiefs believed that the U.S. could win this future war, but not for reasons that the general public knew about. Since war’s end, across the ruins of the Third Reich, U.S. military officers had been capturing and then hiring Hitler’s weapons makers, in a Top Secret program that would become known as Operation Paperclip. Soon, more than 1,600 of these men and their families would be living the American dream, right here in the United States. Operation Paperclip: How The Government Smuggled Nazi Scientist War Criminals To America After World War II. In the fall of 1944, the United States and its allies launched a secret mission code-named Operation Paperclip. 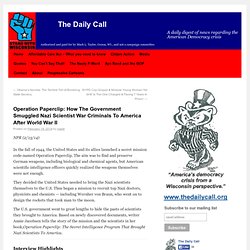 The aim was to find and preserve German weapons, including biological and chemical agents, but American scientific intelligence officers quickly realized the weapons themselves were not enough. They decided the United States needed to bring the Nazi scientists themselves to the U.S. Thus began a mission to recruit top Nazi doctors, physicists and chemists — including Wernher von Braun, who went on to design the rockets that took man to the moon. The U.S. government went to great lengths to hide the pasts of scientists they brought to America.

Operation Paperclip: How US Recruited Nazi Scientists. Mosquito Wars: Secret Bioweapons Development In Nazi Germany. The Nazis studied everything to gain an advantage. 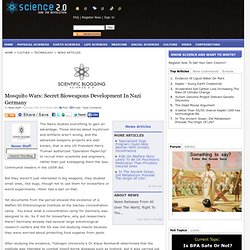 Those stories about mysticism and artifacts aren't wrong, and the advanced weapons projects are well known, that is why US President Harry Truman authorized "Operation Paperclip" to recruit their scientists and engineers, rather than just kidnapping them the way Communist leaders in the USSR did. But they weren't just interested in big weapons, they studied small ones, like bugs, though not to use them for biowarfare or weird experiments.

Hitler had a ban on that. Operation Paperclip. U.S. hired Nazis to test LSD and CIA interrogation techniques, book says. By John ByrneThursday, February 13, 2014 10:51 EDT It’s long been known that Nazi scientists helped the U.S. in its quest to secure its military might and space program at the height of the Cold War. 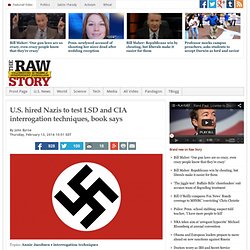 Wernher von Braun, for example, a Nazi rocket scientist, led a team that helped the U.S. develop the vehicle employed for the first nuclear missile test, and aided efforts to launch first Western satellite in 1958. Hundreds of Nazi scientists were given citizenship between 1945 and 1955. But what’s been unknown — until today — is the extent to which former Nazis were employed to test LSD and other interrogation techniques on captured Soviet spies. According to a book released this week by journalist Annie Jacobsen, U.S. intelligence hired Third Reich scientists in capacities stranger and more nefarious than anything reported before. The book follows 21 former Nazis, eight of whom worked side by side with Hitler and his top lieutenants. Quoting a memorandum on a program titled U.S. New Book 'Operation Paperclip' Shows Nazi Scientists Worked For CIA During Cold War.

The United States recruited Nazi scientists after the end of World War II and put them to work on secret military and intelligence programs during the Cold War -- that is the astonishing topic of a new book published this week. 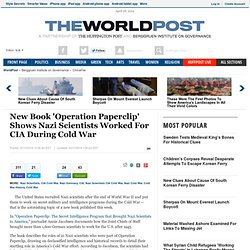 In "Operation Paperclip: The Secret Intelligence Program that Brought Nazi Scientists to America," journalist Annie Jacobsen documents how the Joint Chiefs of Staff brought more than 1,600 German scientists to work for the U.S. after 1945. The book describes the roles of 21 Nazi scientists who were part of Operation Paperclip, drawing on declassified intelligence and historical records to detail their startling role in America's Cold War effort. According to Jacobson, the scientists had helped Adolf Hitler to develop weapons such as sarin gas and weaponized bubonic plague, and several had even stood trial for war crimes. I am Annie Jacobsen, journalist and author of Operation Paperclip, a book about the secret intelligence program that brought Nazi scientists to America. AMA! : IAmA. Book Review: 'Operation Paperclip' Hide captionAdolf Hitler salutes to a crowd of soldiers at a Nazi rally in 1938.

In August 1945, President Truman agreed to the execution of Operation Paperclip—recruiting German scientists so that America would benefit from their knowledge and expertise. Truman’s order, though, expressly excluded anyone who had been a member of the Nazi Party, was a “nominal participant in its activities, or an active supporter of Nazi militarism.” That would rule out a lot of valuable folks, so the Joint Intelligence Objectives Agency (JIOA) had to find a way around this explicit order. And they did. As many as 1,600 nuclear physicists, chemists, physicians, engineers, and naval weaponeers, and rocket scientists—including the “Father of Rocket Science” Wernher von Braun—were successfully “bleached” of their Nazism and brought to work for the United States.

Project paperclip documents : theshowpodcast.com. Operation Paperclip/MK ULTRA Nazi Scientists Moved To America! CIA was formed by absorbing in secret almost the entire Nazi war criminal infrrastructure. BLOWBACK: U.S. Recruitment of Nazis and Its Effects on the Cold War by Christopher Simpson. The CIA protected Adolf Eichmann, architect of the Holocaust. The day before yesterday, 6 June 2006, the New York Times reported the following: “The Central Intelligence Agency took no action after learning the pseudonym and whereabouts of the fugitive Holocaust overseer Adolf Eichmannn in 1958, according to CIA documents that shed new light on the spy agency’s use of former Nazis as informers after World War II. The CIA was told by West German intelligence that Eichmannn was living in Argentina under the name ‘Clemens’ -- a slight variation on his actual alias, Klement -- but kept the information from Israel...”[1] For those unfamiliar with the history of the Holocaust, Adolf Eichmann was the central architect of Adolf Hitler’s Final Solution: the German Nazi program of extermination of the European Jews.

What the New York Times is reporting is that the CIA protected Eichmann after he became a fugitive. This is amazing, but the whole truth is even more amazing, and that's what the New York Times fails to report. Simpson, Christopher. 1988. Christopher Simpson. Christopher Simpson "is Associate Professor of Communication at American University. His other books include... He is the recipient of six national and international awards for historical writing, literature, and investigative reporting. His work has appeared in the Journal of Communication , Intelligence and National Security, and many other magazines and journals. " [1] Books. Georges Albertini. Christopher Simpson - Blowback. Blowback Christopher Simpson Book Review. Project paperclip - Conspiracy Theory - tribe.net. US has used Nazi collaborators for decades – US professor. GIVE US YOUR TIRED, YOUR POOR, YOUR NAZIS SCIENTISTS. Blowback America's recruitment of Nazis, and its disastrous effect on our domestic and foreign policy.