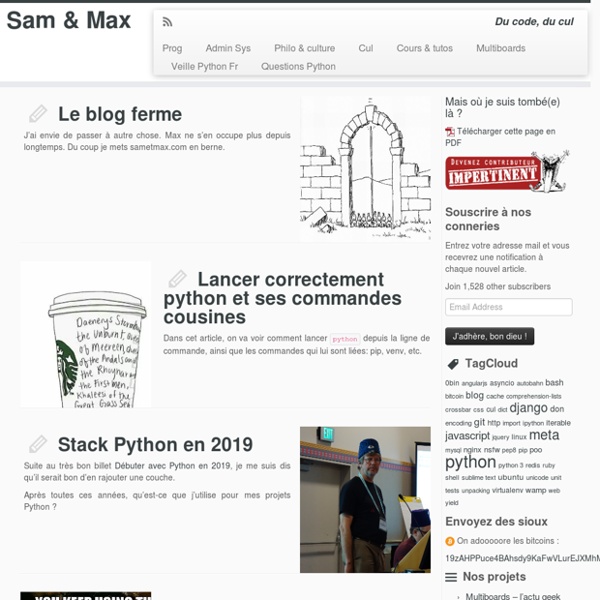 Get Used To It: Quantum Computing Will Bring Immense Processing Possibilities The one thing everyone knows about quantum mechanics is its legendary weirdness, in which the basic tenets of the world it describes seem alien to the world we live in. Superposition, where things can be in two states simultaneously, a switch both on and off, a cat both dead and alive. Or entanglement, what Einstein called “spooky action-at-distance” in which objects are invisibly linked, even when separated by huge distances. But weird or not, quantum theory is approaching a century old and has found many applications in daily life. As John von Neumann once said: “You don’t understand quantum mechanics, you just get used to it.”

The Absolute Minimum Every Software Developer Absolutely, Positively Must Know About Unicode and Character Sets (No Excuses!) by Joel Spolsky Wednesday, October 08, 2003 Ever wonder about that mysterious Content-Type tag? RPyC - Transparent, Symmetric Distributed Computing — RPyC RPyC (pronounced as are-pie-see), or Remote Python Call, is a transparentpython library for symmetricalremote procedure calls, clustering and distributed-computing. RPyC makes use of object-proxying, a technique that employs python’s dynamic nature, to overcome the physical boundaries between processes and computers, so that remote objects can be manipulated as if they were local. A screenshot of a Windows client connecting to a Linux server. Note that text written to the server’s stdout is actually printed on the server’s console.

World of Chris << back to index Today, Tesla Motors issued a press release offering car manufacturers an implicit license to use Tesla's battery patents "in good faith" to help build out an electric car fleet, with the reasoning that Tesla alone does not have the manufacturing capacity or scale to replace gasoline-powered motors in time to prevent climate change-induced devastation. The release was met with a lot of skepticism around the legal enforcability of such an announcement. I responded emotionally, and I wanted to follow up on my initial thoughts with a more logic-based argument as to why Anti-Tesla sentiment exemplifies a very troubling picture of American culture, and why it matters to you. Sorry, but we're going to have to learn some game theory. WebRTC: Not Quite Magic WebRTC is an open source real-time communications standard for web browsers exposed through JavaScript APIs. The goal as stated on the project’s webpage: To enable rich, high quality, RTC applications to be developed in the browser via simple JavaScript APIs and HTML5. In the past year I have been hearing more and more people talk about WebRTC and its plugin-less and auto-magical nature. At hackathons kids pump out amazing projects that allow for rich server-less communication between browsers, polished in just a few hours. Scores of people talk about how you can get a WebRTC based application up and running in 5 minutes flat. All of this is true when you are developing an application for communicating with people in the same room.

Google Just Open Sourced TensorFlow, Its Artificial Intelligence Engine Tech pundit Tim O’Reilly had just tried the new Google Photos app, and he was amazed by the depth of its artificial intelligence. O’Reilly was standing a few feet from Google CEO and co-founder Larry Page this past May, at a small cocktail reception for the press at the annual Google I/O conference—the centerpiece of the company’s year. Google had unveiled its personal photos app earlier in the day, and O’Reilly marveled that if he typed something like “gravestone” into the search box, the app could find a photo of his uncle’s grave, taken so long ago. Google is open sourcing software that sits at the heart of its empire. The app uses an increasingly powerful form of artificial intelligence called deep learning.

William Edwards, Coder Monday, April 7, 2014 I’m giving a Mill CPU talk in Växjö, Sweden 2014-04-25 There are perhaps a few seats available to interested members of the public if you’re in or near Växjö at the end of the month :) Announcing a presentation at 13.00h, Friday, April 25 at: Linnéuniversitetet (Linnaeus University) Vejdes Plats 6, Linnéuniversitetet Building B, Room 3021 352 52 Växjö Sweden

Python Types and Objects Can Skim Section This oddly placed section explains the type-instance and supertype-subtype relationships, and can be safely skipped if the reader is already familiar with these OO concepts. Skimming over the rules below might be useful though. Blog Every API developer is looking for ways to manage their application more securely, without sacrificing speed or ease of implementing new features. To that end, we recently updated the core Stormpath product – our REST API – to Spring Boot. Along the way, we utilized a number of critical efficiencies that would be of value to anyone developing an API using Spring Boot. Many teams find it difficult to manage authentication and access control to their APIs, so we want to share a few architectural principles and tips from our migration to make it easier to manage your Spring Boot API. Note: Below we use the command line tool httpie ( to exercise the examples. Read more