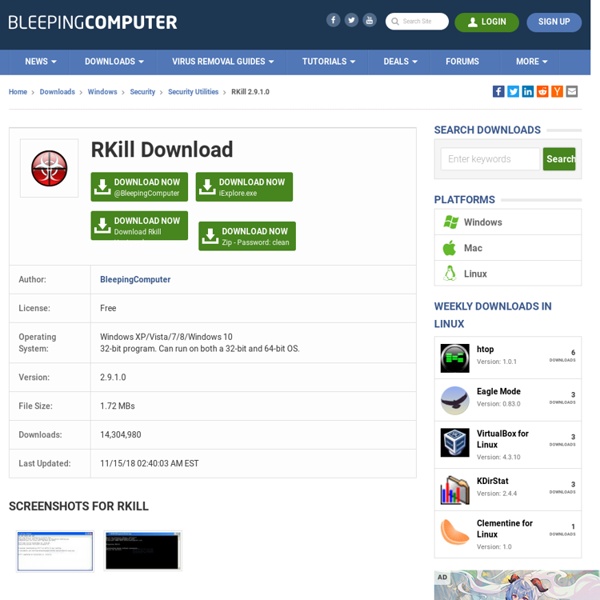 RKill is a program that was developed at BleepingComputer.com that attempts to terminate known malware processes so that your normal security software can then run and clean your computer of infections. When RKill runs it will kill malware processes and then removes incorrect executable associations and fixes policies that stop us from using certain tools. When finished it will display a log file that shows the processes that were terminated while the program was running. As RKill only terminates a program's running process, and does not delete any files, after running it you should not reboot your computer as any malware processes that are configured to start automatically will just be started again. Instead, after running RKill you should immediately scan your computer using some sort of anti-malware or anti-virus program so that the infections can be properly removed. Below are a list of RKill download links using different filenames. Visitors who viewed this program also viewed: Related:  Computer Operation

Windows 7 shuts off my network adapter when i the computer goes into Hey guys, I just wanted to chime in, I'm having what appears to be the same problem. I'm not sure if this is exactly what you are seeing, but my computer doesn't need to go to sleep, there just needs to be no network activity. What seems to keep my NIC online, is if I keep a command prompt window open with a continuous ping to a server I know will reply to those pings. I have gone through power settings, have sleep, etc. turned off, I have all options under [Power Management] turned off on my NIC properties, and have downloaded new drivers for my NIC (again) and still have the same issue. I'll keep looking for a solution and post it here if I find something

Winpatrol 2011 antivirus antispy WinPatrol v30.5.2014.1 March 22st, 2014 Fixed errors with Delayed Start programs on x64 version of Windows. WinPatrol v30.5.2014.0 March 16st, 2014 This release addresses two areas that have been discussed not only on social media but on national news. Check for Safe Updates We've added a special "Check for Safe Updates" button on our PLUS tab/page. Restore Deleted Files The other new feature comes from feedback given to radio host Kim Komando. PLUS Upgrade Disount for Windows XP The new Safe Update engine will also detect which version of Windows you're running. Dialog Format and Positioning Improvements are continuing on positioning of components within a WinPatrol dialog screen. WinPatrol v30.1.2014 This 2nd release of WinPatrol 2014 provides a number of bug fixes that have been reported and improvements that have been requested. International Date and Time Formats As previously announced WinPatrol 2014 will continue to support our friends outside the U.S. Prior Release Notes

15 advanced Windows Media Center tips Windows Media Center is a cracking piece of software. It works elegantly if you're sitting at your desk, and equally well if you're reclining on your sofa, waving a remote control and watching a movie. However, despite its many advantages and undeniable prettiness, Media Center does have its foibles and limitations. 1. Many high definition videos come in MKV file format, which you can play back in VLC Media Player, but not in Windows Media Center. With 64-bit Windows you'll also need the 64-bit SVN, which you can get from the same place. You need to associate MKV files with Windows Media Center. 2. You can use multiple tuners in Media Center, but there's an upper limit of four. Download and extract the ZIP file and run 'TunerSalad.exe'. 3. Switching audio outputs in Windows is quite fiddly and can be tricky to do from the couch, but there's a plug-in called Audio Render Updater (French language) or translated by Google. 4. Download Windows Movie Maker 2012 5. 6. 7. 8. 9. 10. 11. 12. 13.

Download FREE Bootable Rescue CDs from Kaspersky, BitDefender, Avira, F-Secure and Others UPDATE: Also check out free Windows Defender Offline Rescue Tool released by Microsoft. Many times we found ourselves in a difficult situation when our system cannot load in the regular way, for example due to virus infection or some system file missing, etc. In such conditions, Rescue CD becomes very useful. You can simply boot using the rescue CD and can scan your system, remove the virus, copy/delete files, create/delete partitions and many other system tasks. So a Rescue CD is boon for all of us. Many respected anti-virus companies are providing their rescue CDs free of cost. Kaspersky Rescue CD: Kaspersky is one of the best anti-virus company and now its providing a rescue CD absolutely free which contains the latest Kaspersky anti-virus. Download Kaspersky Rescue CD BitDefender Rescue CD: BitDefender is also a great anti-virus software. Download BitDefender Rescue CD AVG Rescue CD: AVG is one of the best FREE anti-virus and it also provides rescue CD. Download AVG Rescue CD Panda SafeCD:

What is bank reconciliation and how do I use it? – Help Center What is bank reconciliation and how do I use it? (1 of 1) Bank reconciliation is a way to make sure that all of the transactions on your bank statement are in Wave. Watch the video, or scroll down for an in-depth look at how bank rec can help you and your business. Direct link to the Youtube video How do I start reconciling my accounts? You can get into "bank reconciliation mode" when you filter by Account on the Transactions page. Go to your Transactions page and click the Account: All filter. Tip: Turn off any filters that you may have turned on so you can see everything up front. You should now see three boxes at the top of the transactions page! What do all of these boxes mean? The Ending Balance is what your online bank statement says is your balance as of a particular date.You can change this date by using the date filters. Let's say you look at your online bank statement from January 1st to January 31st and the ending balance is $1759.98. Not all transactions have been verified. Success!

Six enterprise security leaks you should plug now By John Brandon October 12, 2010 06:00 AM ET Computerworld - The Titanic was thought to be unsinkable, a testament to the engineering prowess of its day and the fact that luxury liners rarely collided with massive icebergs. In modern enterprises, there's a similar perception of invulnerability. Here's a look at six security holes that are often wide open, even in companies that take great pride in their security precautions. 1. Smartphones create some of the greatest risks for enterprise security, mostly because they're so common and because some employees just can't resist using personal devices in the office -- even if their employers have well-established policies prohibiting their use. "The danger is that cell phones are tri-homed devices -- Bluetooth, Wi-Fi and GSM wireless," says Robert Hansen, founder of the Internet security consulting firm SecTheory. Another tactic is to use network access control to make sure whoever is connecting is, in fact, authorized to connect.