How to make calls on Google Home smart speakers. You can use your Google Home, Home Mini, Home Max or Home Hub to make phone calls - neat, right? 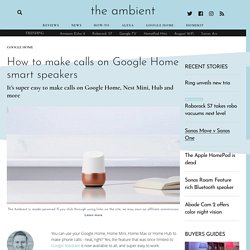 Yes, the feature that was once limited to Google Assistant is now available to all, and super easy to work. Remember, these aren't calls like the ones you make and take on a smartphone, with Wi-Fi instead powering the free chats between you and other numbers. HTC 10 - Types of storage - SETTINGS & SERVICES - How-tos - Support. How Do I "Factory Reset" My Tablet? Stayconnected product disclosure statement. How To Upgrade To A New Android Phone And Take Everything With You. Congratulations, you just got a brand new Android phone! 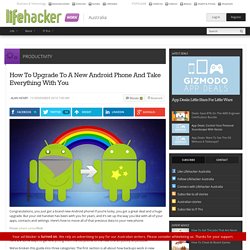 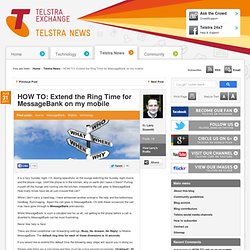 I’m resting peacefully on the lounge watching the Sunday night movie and the phone rings. UGH the phone is in the kitchen, why on earth did I leave it there? Pulling myself off the lounge and running into the kitchen, meanwhile the call goes to MessageBank. How many times have we all just missed that call? While I don’t carry a hand bag, I have witnessed another scenario: the lady and the bottomless handbag. While MessageBank is such a valuable tool for us all, not getting to the phone before a call is diverted to MessageBank can be most frustrating. Never fear help is here. There are three conditional call forwarding settings (Busy, No Answer, No Reply) to Mobile MessageBank. If you would like to extend this default time the following easy steps will assist you in doing so. Please note there are 4 ring times and they must be in five second increments: 15(default), 20, 25 and 30 seconds. To extend the ring time simply enter and press SEND or CALL.

HOW TO: Extend the Ring Time for MessageBank on my mobile. [GUIDE] Partitioning your sd-card correctly. Many users on this forum don't know how to partition their sd-cards correctly, resulting in later problems with ROMs, like lag issues, or data losses. 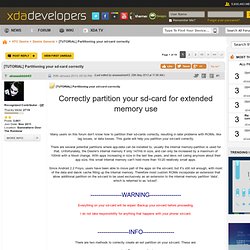 This guide will help you partition your sd-card correctly. There are several potential partitions where app-data can be installed to, usually the internal memory-partition is used for that. Unfortunately, the Desire's internal memory if only 147mb in size, and can only be increased by a maximum of 100mb with a hboot change. With apps increasing in size in the last few years, and devs not caring anymore about their app size, this small internal memory can't hold more than 10-20 relatively small apps. Since Android 2.2 Froyo, users have been able to move part of the apps on the sd-card, but it's still not enough, with most of the data and dalvik cache filling up the internal memory. How to Partition Your SD Card. Create SD Card ext3 partition » Aussie Android ROMS. 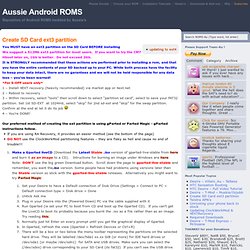 If you want to try the CM7 Hboot later on, 1Gb is better. Do not exceed 2Gb. How to Partition SD Card and Use Link2SD in any Android Phone with Screenshots. Adam Parnala | On 11, Mar 2012. 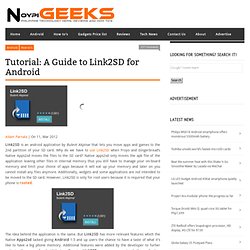 [FAQ]ROOT MEMORY: a2sd+ / partitions (updated 10th August 2011) WARNING: Rooting (and related processes) can be dangerous if you do not understand the concepts, risks and procedures involved. 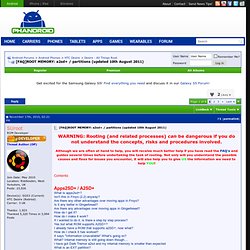 Although we are often at hand to help, you will receive much better help if you have read the FAQ's and guides several times before undertaking the task of rooting. Search. HTC Desire: How to Update with Android Ice Cream Sandwich (ICS or Android 4.0) Now you need to clean your phone’s ROM by selecting “Wipe Cache”, ”Wipe Data” and “Wipe Dalvic Cache”. 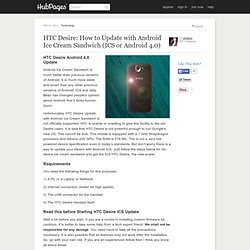 Now select “install zip from SD card” and find put the ICS ROM file from your SD card to install. Next install the Google Apps package in the same manner. Wait for these installations to complete. When done select “++++ Go Back++++” to go back to the main menu. Upgrade HTC Desire with Ice Cream Sandwich. Revolutionary. Tech Talker : Best Apps for Your Android Device. A while back, I did an episode on some amazing apps for iOS devices. 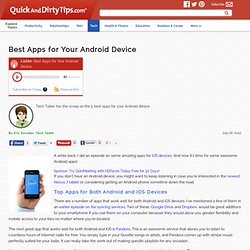 And now it’s time for some awesome Android apps! If you don’t have an Android device, you might want to keep listening in case you’re interested in the newest Nexus 7 tablet or considering getting an Android phone sometime down the road. Top Apps for Both Android and iOS Devices There are a number of apps that work well for both Android and iOS devices. I’ve mentioned a few of them in an earlier episode on file syncing services. The next great app that works well for both Android and iOS is Pandora. If you’ve been listening to the Money Girl podcast, you’ve probably heard her mention Mint a few times. Again these apps work great on both iOS and Android devices, but they are so good that I felt the need to mention them even in this Android-only podcast. 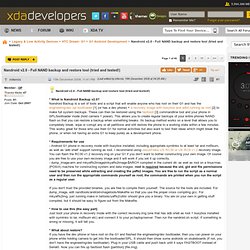 * What is Nandroid Backup v2.0? Nandroid Backup is a set of tools and a script that will enable anyone who has root on their G1 and has the engineering/dev spl bootloader [1] (or has a dev phone) + a recovery image with busybox and adbd running as root [2] to make full system backups. The Complete Guide To Rooting Any Android Phone. We love Android, but rooting your phone can give you the opportunity to do so much more than your phone can do out of the box — whether it’s speeding it up with overclocking or customising the look of your phone with themes. Here’s how to root some of the most popular current phones with minimal effort.

I don't know for other ROMs or Kernels. Your ROM must support init.d boot scripts.