* At Google X, a Top-Secret Lab Dreaming Up the Future 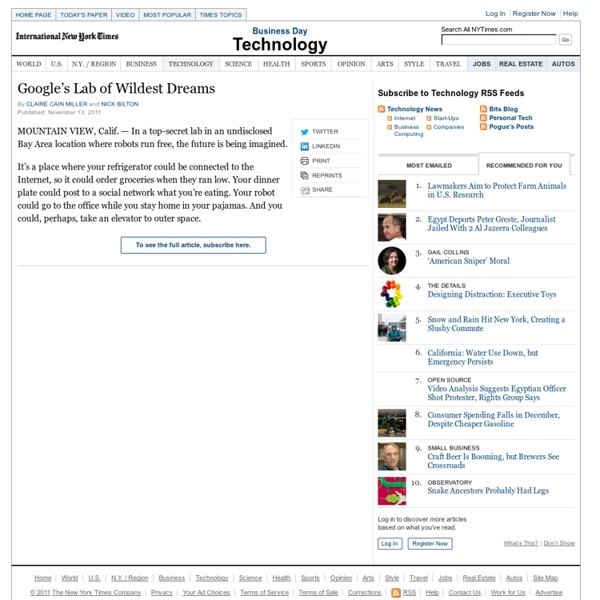 It’s a place where your refrigerator could be connected to the Internet, so it could order groceries when they ran low. Your dinner plate could post to a social network what you’re eating. Your robot could go to the office while you stay home in your pajamas. And you could, perhaps, take an elevator to outer space. These are just a few of the dreams being chased at X, the clandestine lab where Google is tackling a list of 100 shoot-for-the-stars ideas. Although most of the ideas on the list are in the conceptual stage, nowhere near reality, two people briefed on the project said one product would be released by the end of the year, although they would not say what it was. “They’re pretty far out in front right now,” said Rodney Brooks, a professor emeritus at M.I.T.’s computer science and artificial intelligence lab and founder of Heartland Robotics. At most Silicon Valley companies, innovation means developing online apps or ads, but Google sees itself as different. Mr.

Synthetic Neurobiology Leah Acker, Bara Badwan, Changyang Linghu, Zixi Liu, Christian Wentz, Nir Grossman, Fumi Yoshida, Rin Yunis New technologies for controlling neural circuit dynamics, or entering information into the nervous system, may be capable of serving in therapeutic roles for improving the health of human patients–enabling the restoration of lost senses, the control of aberrant or pathological neural dynamics, and the augmentation of neural circuit computation, through prosthetic means. We are assessing the translational possibilities opened up by our technologies, exploring the safety and efficacy of optogenetic neuromodulation in multiple animal models, and also pursuing, both in our group and in collaborations with others, proofs-of-principle of new kinds of neural control prosthetics.

From mephedrone to Benzo Fury: the new 'legal highs' | Society The profusion of legal highs is bewildering. Often sold online as "bath salts" or "plant food" because they are not permitted to be marketed for human consumption, legal highs may be legal or, confusingly, illegal. The active ingredients in similarly named drugs are also often completely different. "The legal highs market is flooded with scammers and people selling legal and illegal drugs," says Mike Power, author of a new book, Drugs 2.0: The Web Revolution that is Changing the Way the World Gets High, which is published in May. According to Power, new drugs are commissioned based on an existing illegal drug such as ketamine, with globalised drug labs attaching a couple of additional molecules to an illegal drug to render their new variant legal in the UK. Harry Shapiro of the charity DrugScope says consumers of legal highs should not assume they are legal – or any safer than illegal drugs. There are three broad families of "legal" highs or "new" drugs. Synthetic cannabinoids Mephedrone

Twitter map finally reveals exactly where Manchester United fans live Their interactive results map highlights the historical east/west split between fans in Manchester, but also shows that United – despite perceptions – do not have huge waves of support in London and the south east. The grey areas show relative few United fans live in London The map also draws an interesting picture of Liverpool's vast support in Wales and Northern Ireland, a he small pocket of Arsenal fans among a vast area of Tottenham's dominance north of London and, whisper it, the masses of support Norwich in Ipswich postcodes. For information about how the data was sourced, and how the map was created, visit the Oxford Institute site here.

European Robotics Technology Platform EUROP, the European Robotics Technology Platform, is an industry-driven framework for the main stakeholders in robotics to strengthen Europe’s competitiveness in robotic R&D, as well as global markets, and to improve quality of life. To this aim EUROP has developed a joint European Strategic Research Agenda (SRA), which would help focus research initiatives and innovative activities towards maximum impact. The SRA was published in July 2009. EUROP is one of several European Technology Platforms (ETPs) supported by the EU. EUROP's roots go back to October 2004, when leading European robotics organisations started to formulate the need for a consolidated approach to European robotics, which led to the constitution of EUROP as an ETP in October 2005. The SRA was first launched in 2005. The newly established organisation euRobotics AISBL (Association Internationale Sans But Lucratif) is currently working on updating the European robotics roadmap. Please note:

Tatler's Dog Dies In Door Disaster at Vogue House It's the kind of death that would suit the most dramatic of fashionistas - being killed by the revolving door at Vogue House. And yesterday, that grim fate befell Tatler magazine's in-house mascot, a young Dachsund named Alan, arguably the most well-connected dog in Britain. The revolving door through which generations of celebrities and stylists have walked into the offices of Vogue, GQ and Tatler was transformed into the jaws of death for Alan - or Alan TBH Plumptre to give him his full name - after the small beast bounded forwards into the revolving door when being taken out for a walk by a hapless staffer whose identity has not been revealed.

18 heads found at airport were sent for cremation | World news Associated Press= CHICAGO (AP) — It sounded ghoulish enough: a shipment of 18 frozen human heads discovered and seized by customs officials during routine X-ray screening of cargo arriving at O'Hare International Airport in Chicago. Turns out the heads were used for medical research in Italy and were being returned for cremation in Illinois. The holdup was due to a paperwork problem. It just so happens such shipments are commonplace, and heads — quite a few of them — crisscross the globe via airplane and delivery truck. "Just last week, we transported eight heads, unembalmed, to Rush University Medical Center for an ophthalmology program," said Paul Dudek, director of the Anatomical Gift Association of Illinois, which supplies cadavers and body parts to medical schools in the state for training students. His association sends about 450 whole cadavers to medical schools each year and also ships individual body parts, including about a dozen shipments of heads annually. U.S.

Immortalise your children's drawings as coloured 3D-printed sculptures | Art and design You can have your baby's shoes dipped in gold, your child's milk teeth turned into jewellery, and even your foetus scanned and cast in resin. And now you can have your children's scribbles immortalised in stone, thanks to a project by Spanish designer Bernat Cuni. Crayon Creatures is a new service that takes your child's drawings, transforms them into a digital model, then provides you with a 3D-printed version – in full colour. Cuni says the idea came from his children's interest in seeing 3D printing in action. The first stage in the process is interpreting the drawing, to actually understand what it could be in three dimensions. Once the image is scanned, it is cut out and extruded using digital modelling software, "as if cut from a thick block of wood". "There are some limitations, like very thin arms, which would break off easily," says Cuni – and budding abstract expressionists might have difficulty with overly spiky shapes.

European Robotics Public Private Partnership (PPP) The European Robotics Public Private Partnership (PPP) is the teaming up of the robotics industry, research, academia and the European Commission to launch a joint research, development and innovation programme in order to strengthen the position of European robotics as a whole. The programme will be jointly developed by the private side (robotics manufacturers, component manufacturers, systems integrators, end users, research institutes, universities) and the public side (the European Commission). Thus, the main objective of the Robotics PPP is to boost current European robotics research, development and innovation.

Whitby church under threat from landslips | UK news Human bones in a graveyard made famous by Bram Stoker's story of Dracula have been uncovered by the second landslip to hit a picturesque Yorkshire fishing port. Blocked and broken drainage is being blamed for increasingly serious problems on the cliff below St Mary's church in Whitby where the legendary vampire makes landfall in the classic Victorian horror story. Soil and crumbling rock started peeling away in November after torrential rain added to the problems and caused a row of five terraced cottages in Aelfleda Street to become potentially unstable. Left teetering above a steep slope after their gardens fell away in November, they were demolished shortly before Christmas. Now warning signs have been posted along a well-used pathway to the graveyard which features in Stoker's novel. Debris slipping from the area has included the bones and raised concern about worsening collapse. "The cemetery has been closed since 1865, so if any graves are exposed it's only bones.

* Google Builds Artificial Brain with Feline Recognition Algorithm... Who's Laughing Meow Awhile back, we talked about the kinds of metadata , we talked about why it's so important to write good metadata , and all that discussion coincided with our coverage of the metadata section of the YouTube Advertiser Playbook . The big reason why it's important to properly classify and describe your videos with actual words is that facial and speech recognition software isn't so good that it can tell you accurately, or with context, what a video is. Well, algorithms for facial recognition are getting a lot better, as a neural network built at Google learned to identify cats on YouTube...without knowing what a cat is. Google's highly secretive X lab, which is so secretive that people narrow its location down to "possibly the California Bay Area," built a neural network of 16,000 computers with 1 billion connections and let it browse YouTube. From Wired : In other words: Here's a highlight from that paper: But, they're working on that, aren't they?