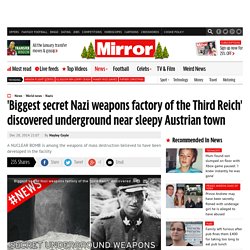 The 75-acre facility, located near the town of St Georgen an der Gusen, is believed to have been used to create and test weapons of mass destruction and was deemed so important to the Nazis that the head of the SS and Hitler's right hand man Heinrich Himmler, even oversaw its development. The complex, which experts believe was the "biggest secret weapons production facility of the Third Reich", was discovered by Andreas Sulzer, an Austrian documentary maker who found reference to the bunkers in the diaries of an old Austrian physicist. They were so well hidden though that bulldozing equipment was to needed to cut away massive granite plates the Nazis had used to hide the entrance shaft in 1945.

Ground penetrating radar was also required to confirm reports of how large the facility was. German Federal Archives. Vast underground complex where the Nazis developed WMD is discovered in Austria  Facility was discovered near the town of St Georgen an der Gusen, AustriaUnderstood that it could be connected to another Nazi weapons facilityExperts believe that it was used to conduct research into atomic bombsSupported by heightened radiation readings and witness testimonies By Stephanie Linning for MailOnline Published: 12:20 GMT, 28 December 2014 | Updated: 08:24 GMT, 29 December 2014 A labyrinth of secret underground tunnels believed to have been used by the Nazis to develop a nuclear bomb has been uncovered. 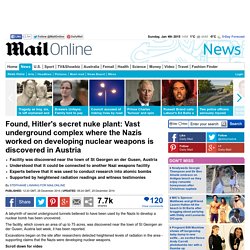 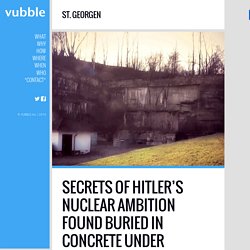 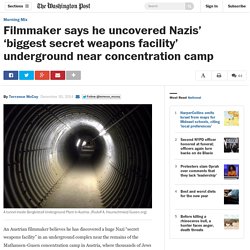 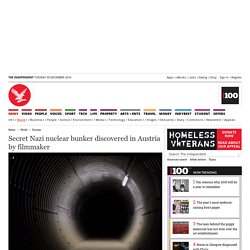 Its exact location was determined using intelligence reports and radiation tests, which revealed higher than normal levels of radioactivity. Andreas Sulzer, the filmmaker who is leading the exploration, discovered a critical 1944 report by the forerunner to the CIA, from an American spy who noted the existence of a secret weapons programme in the area. The facility was built using slave labour from a nearby concentration camp, Mauthausen-Gusen. Covering up to 75 acres, the vast site was believed to be connected to the underground Bergkristall factory, where the Messerschmitt Me 262, the first jet-powered fighter plane, was built. Possible underground Nazi nukes factory discovered.

Suspiciously high radiation levels around the Austrian town of St. 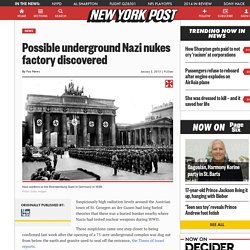 Georgen an der Gusen had long fueled theories that there was a buried bunker nearby where Nazis had tested nuclear weapons during WWII. Those suspicions came one step closer to being confirmed last week after the opening of a 75-acre underground complex was dug out from below the earth and granite used to seal off the entrance, the Times of Israel reports. Nazi's Secret Nuclear Laboratory Found in Austria - Breitbart. Excerpt from Operation Paperclip: The Secret Initiative to Bring Nazi Scientists to America. Journalist Annie Jacobsen, author of the 2011 best seller Area 51, returns with Operation Paperclip, a doggedly researched account of the post–World War II project in which American military officials launched a secretive initiative to bring the Nazis’ most useful scientific minds to the United States. 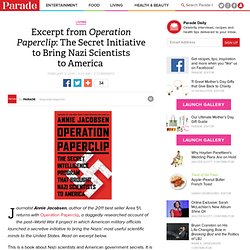 Read an excerpt below. This is a book about Nazi scientists and American government secrets. It is about how dark truths can be hidden from the public by U.S. officials in the name of national security, and it is about the unpredictable, often fortuitous, circumstances through which truth gets revealed. Operation Paperclip was a postwar U.S. intelligence program that brought German scientists to America under secret military contracts. CIA and Project Monarch Full History Ron Patton : theshowpodcast.com. Author: theshowpodcast.com Keywords: CIA; project monarch; ron patton; mk ultra; mkultra; the induction series Collection: opensource Description by Ron Patton Nazi Mind Control. 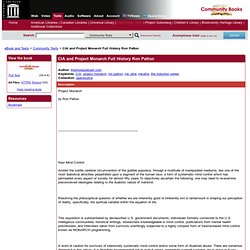 History Detectives. Operation Paperclip: US Harbored Nazi War Criminals. Source: topinfopost.com Operation Paperclip was the codename under which the US intelligence and military services extricated scientists from Germany, during and after the final stages of World War II. 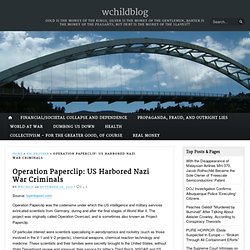 The project was originally called Operation Overcast, and is sometimes also known as Project Paperclip. Of particular interest were scientists specialising in aerodynamics and rocketry (such as those involved in the V-1 and V-2 projects), chemical weapons, chemical reaction technology and medicine. These scientists and their families were secretly brought to the United States, without State Department review and approval; their service for Hitler’s Third Reich, NSDAP and SS memberships as well as the classification of many as war criminals or security threats also disqualified them from officially obtaining visas. Tom Lehrer - Wernher von Braun - with intro - widescreen. 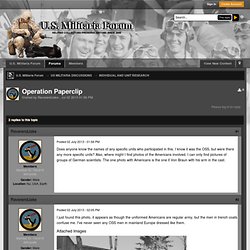 Its predecessor, Operation Overcast, which was the first formal operation to "bag" German scientists was only authorized in May, 1945. Prior to that, the JOIC (Joint Intelligence Operation Center) was actively involved in collecting information and targeting German scientists they wanted to nab, but had no formal operation going on. If anything, they had OSS teams in the field driving around from place to place frantically trying to grab these guys based on leads they could drum up or get from up top. There is a great documentary a similar program, Alsos, in which German speaking soldiers were recruited by the OSS/Army to seize anyone and anything related to German nuclear research. .

OPERATION PAPERCLIP: CIA AND NAZI SCIENTISTS - History/Military/Conspiracy Theory (documentary) Operation Paperclip: The CIA & the Nazis. When is a “Whistle-Blower” Not Really a Whistleblower? But, Altogether Something Else? When Does Everybody Blow Their Whistle AT ONCE, AND NOT STOP UNTIL THE EVIL IS BLOWN AWAY? Remember…you were told via “the media”. First off, read Rappaport’s line of questioning here: Then, digest Creighton’s questions here: And then, you can read other Willy Loman threads on the subject (scroll down) at and look around for more info to distill on this matter. Should you so desire, and have the time. You’re either on the Inside looking out! Frankly, this subject of outrageous and illegal govt. surveillance is so unsurprising to COTO as to merit a “Yawn” and a thunder clap of flatulence.

What AREN’T they doing is a better question? Edward Snowden: It’s Not About the Phones. From Somewhere in the lower bowels of the intelligence agencies in one of those windowless, florescent lit rooms, human-less and puritan, cleansed of all sense of meaning and so of conscience, an eye strained group of analysts are studiously penetrating a dossier on Edward Snowden, which, in all likelihood, contains every detail of the young man’s life, and are adding details about how it may end. A retraction is now necessary: this circumstance is not a possibility; rather than a likelihood, it is a certainty. Project Paperclip: Mother of MK Ultra. Lizzie Bennett Underground Medic February 7th, 2013 Reader Views: 1,233 Immediately after WW11 ended the United States and Russia started searching for German military and scientific secrets. Operation Paperclip and the Osenberg List - History Follower. Operation Paperclip. From Wikipedia Website. List of German rocket scientists in the United States.

The following lists contain names of engineers, scientists and technicians specializing in rocketry who originally came from Germany but spent most of their careers working for the NASA space program in Huntsville, Alabama.