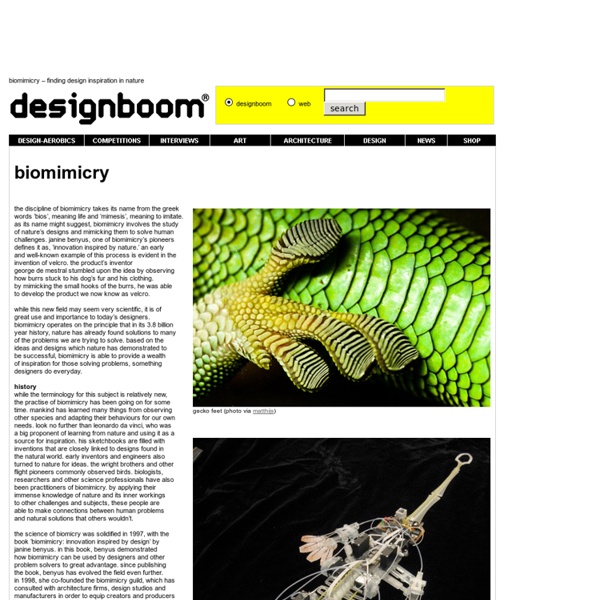 Biomimetics One cloudless midsummer day in February, Andrew Parker, an evolutionary biologist, knelt in the baking red sand of the Australian outback just south of Alice Springs and eased the right hind leg of a thorny devil into a dish of water. The maneuver was not as risky as it sounds: Though covered with sharp spines, the lizard stood only about an inch high at the shoulder, and it looked up at Parker apprehensively, like a baby dinosaur that had lost its mother. It seemed too cute for its harsh surroundings, home to an alarmingly high percentage of the world's most venomous snakes, including the inland taipan, which can kill a hundred people with an ounce of its venom, and the desert death adder, whose name pretty well says it all. This the thorny devil knows, with an elegance and certainty that fascinated Parker beyond all thought of snakebite or sunstroke. Parker’s work is only a small part of an increasingly vigorous, global biomimetics movement. “Ah-ha!” Enter the engineers.

Free Energy Devices: Yes They Are Real Who is benefiting from suppressing scientific research? Whose power and wealth is threatened by access to clean and free energy? Who has the desire to create a system where so few have so much, and so many have so little? It’s become extremely obvious, especially within the past few years, that Earth’s dependence on fossil fuels is not needed at all. These concepts have been proven in hundreds of laboratories all over the world, yet never see the light of day. The Research These concepts are currently being discussed at The Breakthrough Energy Movement Conference. The Casimir Effect is a proven example of free energy that cannot be debunked. Vacuums generally are thought to be voids, but Hendrik Casimir believed these pockets of nothing do indeed contain fluctuations of electromagnetic waves. The results of this research have been used by numerous scientists all over the world. Harold E. Before commenting on the article, please read the article, look at the sources and watch the video.

Bird Bone Structure At Heart Of ESA’s 3D Lunar Camp | UrtheCast | AJ Plunkett Ah, the mystery of birds. First, they inspire man to fly. A hollow, closed-cell structure not unlike that found in the bones of birds has proven to be just the combination of strength and weight necessary to build a habitat out of lunar soil. Of course, a lack of significant amounts of lunar soil on Earth means this is mainly theory for the moment, but the experiments done so far have given us a pretty good indication that it might just work. “3D printing offers a potential means of facilitating lunar settlement with reduced logistics from Earth,” states Scott Hovland of ESA’s human spaceflight team, in an ESA statement. Clean Space Tech The ESA has been investigating using 3D printing technology, also known as additive layer manufacturing, as part of its Clean Space initiative to find innovative technologies to reduce the environmental impacts of the space industry. Bird Bone Concept What About Lunar Building Material? Building In A Vacuum

TeacherTube - Teach the World | Teacher Videos | Lesson Plan Videos | Student Video Lessons | Online Teacher Made Videos | TeacherTube.com … proving how technology can live in harmony with nature. | redchalksketch Neri OXMAN By JOHN ORTVED | Photography TOM ALLEN Courtesy Imagine a chair that moves when you move, that adjusts to every muscle in your body, that responds like a living organism . . . a chair kind of like a really excellent lover. Neri Oxman imagined such a chair. Then she built it. Raised in Haifa and Caesarea, Israel, by architect parents, Oxman rebelled (well, by academic standards anyway) by going into medicine, completing med school at the Hebrew University of Jerusalem. Oxman usually looks to nature for practical design answers. As for her own future, she rejects any possibility of a Neri Oxman line of roof tiles or a collaboration on Andre Balazs’s next hotel. To learn more about Neri Oxman’s work, visit her Web site and blog. Like this: Like Loading...

Where Art Meets Gif: The Hypnotic Animated Gifs of David Szakaly Since 2008 Hungarian/German graphic designer David Szakaly has been churning out some of the most dizzying, hypnotic and wholly original gifs on the web under the name Davidope. His blend of twisting organic forms, flashes of black and white, and forays into pulsing technicolor shapes have inspired legions of others to experiment with the medium, many of whom have been featured here on Colossal. It’s hard to determine the scale of Szakaly’s influence online, but a simple Google image search for “animated gif” brings up dozens of his images that have been shared around Tumblr hundreds of thousands of times. Szakaly began experimenting with the vector animation program Macromedia Flash back in 1999 where he used the software to create presentations, banners, and other creatives for clients.

Structuring Biomimicry, Improving Building’s Resiliency The same way Einstein assumes the speed of light to be a constant of reference for his Theory of Relativity, the philosophy of biomimicry assumes Nature as a constant of reference to a performance-based beauty for design. Imitating nature has become a meaningful approach for contemporary architects and design futurists to the built environment, especially for those who foster a future that doesn’t compete with nature but coexist with it. At the light of recent natural disasters around the world, especially those geologically associated such as tsunamis and earthquakes, which have proven its destruction power over the current built environment; architects and structural engineers have found in biomimicry an ecological approach in order to improve future building’s disaster resilience. Present built structures are unresponsive to the Earth dynamics and aren’t completely adapted to the ecosystem flows of forces. Written by Wilfredo Mendez, M.Arch, AIT for IEET.org References:

5 Nature-Inspired Innovations The shifting hues of squid skin, the stickiness of gecko toes, the self-cleansing of lotus leaves. Understanding these and other natural phenomena can yield not only fascinating biological insights, but also fresh solutions to today’s most pressing environmental challenges. Biomimicry — applying the design of natural systems to human problems — has gained momentum in recent years. Last August, the San Diego Zoo opened its Center for Bioinspiration, which works with companies and research institutions to translate zoo scientists’ findings into practical applications. 1.) 2.) 3.) A firefly's light results from a chemical reaction that occurs in the cuticle, a part of the insect's protective outer covering. "The tips of the scales protrude and have a tilted slope, like a factory roof,” Annick Bay, a Ph.D. student at Belgium’s University of Namur, who co-authored the two papers describing the technology, explained in a press release. 4.) 5.) Read More: Innovate: Solar Designs from Nature