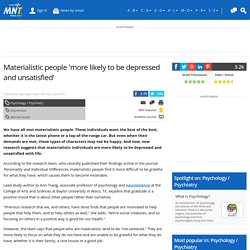 These individuals want the best of the best, whether it is the latest phone or a top-of-the-range car. Life Can be Relentless, Frantic and Exhausting – But it Doesn’t Have to be This Way. Income Inequality Explains Why Economic Growth Does Not Always Translate to an Increase in Happiness. Shigehiro Oishi, University of Virginia, Department of Psychology, P. 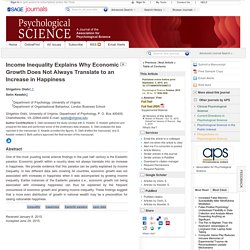 O. Box 400400, Charlottesville, VA 22904-4400 E-mail: soishi@virginia.edu Author Contributions S. Oishi developed the study concept with S. Kesebir. S. Abstract One of the most puzzling social science findings in the past half century is the Easterlin paradox: Economic growth within a country does not always translate into an increase in happiness. Mindfulness: As the pressures of modern living exerts ever more strain on our collective mental health. Giles Crosse examines the situation, and how society might manage these issues better. 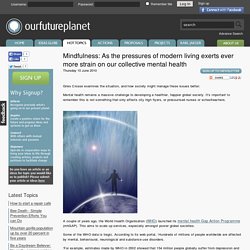 Mental health remains a massive challenge to developing a healthier, happier global society. It’s important to remember this is not something that only affects city high flyers, or pressurised nurses or schoolteachers. A couple of years ago, the World Health Organisation (WHO) launched its mental health Gap Action Programme (mhGAP). This aims to scale up services, especially amongst poorer global societies. Some of the WHO data is tragic. ‘For example, estimates made by WHO in 2002 showed that 154 million people globally suffer from depression and 25 million people from schizophrenia; 91 million people are affected by alcohol use disorders and 15 million by drug use disorders. ‘About 877,000 people die by suicide every year,’ WHO data continues. The WHO also suggests there’s widespread discrimination throughout society regarding mental health.

Thinking ahead Saving lives “There is work being done, e.g. Why Doesn’t Increased Wealth Always Make Countries Happier? Meditating helps students get better grades. George Mason University, Virgina, professor Robert Youmans, who co-lead the study with University of Illinois doctoral student Jared Ramsburg, said: "One difficulty for researchers who study meditation is that the supposed benefits of meditation do not always replicate across different studies or populations, and so we have been trying to figure out why. 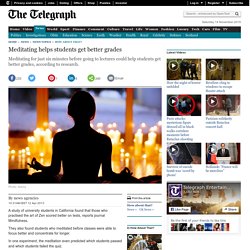 "This data from this study suggest that meditation may help students who might have trouble paying attention or focusing. "Sadly, freshmen classes probably contain more of these types of students than senior courses because student populations who have difficulty self-regulating are also more likely to leave the university. " Researchers believe with more extensive training and coaching that the results could improve.

Is mindfulness the perfect antidote to our tech-filled lives? That’s an under-statement: mindfulness is a meditation technique that has been advocated by Buddhism for 2,500 years. 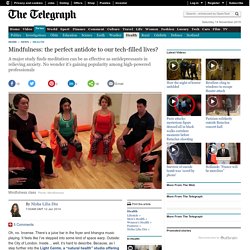 Paul Christelis, the Light Centre’s course leader and a clinical psychologist, defines it as “paying attention to your experience, on purpose, in the present moment, without judgment or criticism”. Its crossover into Western culture has been gradual. But in 2004, its use in preventing the relapse of depression was approved by the National Institute for Health and Clinical Excellence (Nice). It has rapidly gained traction since. Oprah Winfrey In the past few years, Oprah Winfrey, Arianna Huffington and Twitter co-founders Evan Williams and Biz Stone have declared themselves devotees. Social Problems in the UK: An Introduction: Amazon.co.uk: Stuart Isaacs, David Blundell, Anne Foley, Norman Ginsburg, Brian McDonough, Dan Silverstone, Tara Young: 9780415719995: Books. Review 'This innovative and bang up-to-date introductory text offers students an accessible entry point to contemporary social problems and the social science 'business' of analysing just what does and does not count as a social problem and why. 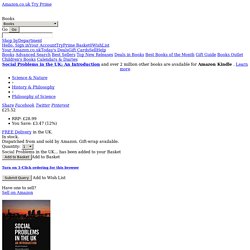 Mindfulness: the saddest trend of 2015. Chances are, in the slew of “New Year New You” suggestions, you will have read about mindfulness. 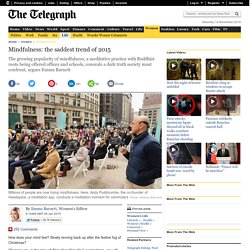 Indeed, it was pretty hard to get through last year without noticing it. The meditative practice, which has its roots in Buddhism and encourages you to focus on the present, rather than on the anxieties of the past or future, is now everywhere. Schools, law firms, banks, governments, the US military... they are all offering mindfulness sessions to staff. The Mental Health Foundation estimates that one in four people will experience a mental health problem every 12 months. Work related stress is estimated to cost British businesses more than a whopping three billion pounds per annum. Top 10 Issues Facing Our Youth Today. Now that we are well into the new Millennium society has begun to recognize serious concerns with issues that kids have to deal with today. 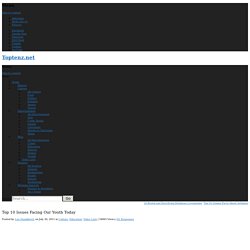 Some issues have always been there but are now coming to the eyes of the public to find solutions. Other issues are new trends as society begins to adapt to a faster pace of life. Below are the top 10 issues facing our youth today. Editor’s Note: This is one of our most popular lists of all time.