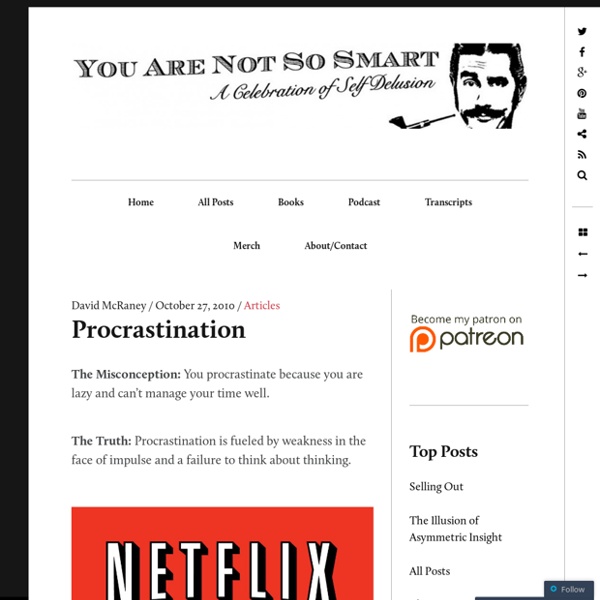 The Misconception: You procrastinate because you are lazy and can’t manage your time well. The Truth: Procrastination is fueled by weakness in the face of impulse and a failure to think about thinking. Netflix reveals something about your own behavior you should have noticed by now, something which keeps getting between you and the things you want to accomplish. If you have Netflix, especially if you stream it to your TV, you tend to gradually accumulate a cache of hundreds of films you think you’ll watch one day. This is a bigger deal than you think. Take a look at your queue. Psychologists actually know the answer to this question, to why you keep adding movies you will never watch to your growing collection of future rentals, and it is the same reason you believe you will eventually do what’s best for yourself in all the other parts of your life, but rarely do. A study conducted in 1999 by Read, Loewenstein and Kalyanaraman had people pick three movies out of a selection of 24. Sources:

10 Psychological Experiments That Went Horribly Wrong Psychology as we know it is a relatively young science, but since its inception it has helped us to gain a greater understanding of ourselves and our interactions with the world. Many psychological experiments have been valid and ethical, allowing researchers to make new treatments and therapies available, and giving other insights into our motivations and actions. Sadly, others have ended up backfiring horribly — ruining lives and shaming the profession. Here are ten psychological experiments that spiraled out of control. 10. Prisoners and guards In 1971, social psychologist Philip Zimbardo set out to interrogate the ways in which people conform to social roles, using a group of male college students to take part in a two-week-long experiment in which they would live as prisoners and guards in a mock prison. 9. Wendell Johnson, of the University of Iowa, who was behind the study Theodore Kaczynski, the Unabomber, also seen top 7. 6. The Milgram Experiment underway 5. 4. 3. 2. 1.

Fix Bad Habits: Insights from a 7-Year Obsession We all have lousy habits. Things we’d like to do, or know we should, but just don’t seem to happen: exercise, diet, productivity or flossing longer than a week after the visit to the dentist. In that sense, I’m like most people – still a work in progress.But, unlike most people, I’ve had on ongoing obsession with figuring out how to fix those lousy habits. I’ve spent thousands of hours being an experimental guinea pig, uncovering surprising findings, such as: Implementing a daily exercise plan is easier than exercising 3 times per weekChanging 10 meals will change 90% of your eating habitsLearning a new skill or language can be accomplished with 5 minutes a day I don’t expect most people to replicate my, perhaps unhealthy, obsession with self-experimentation. Why Bother Changing Habits? My obsession came from a simple idea: with the right conditioning, you could automatically do what you normally need willpower for. Many people make a commitment every January to start exercising. 1. 2. 3.

Placebo Buttons The Misconception: All buttons placed around you do your bidding. The Truth: Many public buttons are only there to comfort you. You press the doorbell button, you hear the doorbell ring. Your whole life, you’ve pressed buttons and been rewarded. The thing about buttons, though, is there seems to be some invisible magic taking place between the moment you press them down and when you get the expected result. Maybe there’s a man inside who pulls out the can of soda and puts it in the chute. You just don’t know, and that’s how conditioning works. The problem here is that some buttons in modern life don’t actually do anything at all. According to a 2008 article in the New Yorker, close buttons don’t close the elevator doors in many elevators built in the United States since the 1990s. Non-functioning mechanisms like this that motivate you to fool yourself are called placebo buttons, and they’re everywhere. Placebo buttons are a lot like superstitions, or ancient rituals. Sources:

88 Ways To Make A Stranger Smile post written by: Marc Chernoff Email Don’t wait for people to smile. Let your guard down. Remember, your best friend was once a stranger too. Love whoever is around to be loved. Smile often.Hold a door open for someone.Pay for the person in line behind you.Send a hand-written thank you card to someone who assisted you with something.Clean out all your old clothes and donate them to someone in need.Give a compliment about a waiter, waitress, sales clerk, etc. to his or her manager.Compliment a stranger’s appearance. And above all, live proudly. Photo by: Thomas Hawk If you enjoyed this article, check out our new best-selling book. And get inspiring life tips and quotes in your inbox (it's free)...

Researchers now able to stop, restart light By William J. Cromie Gazette Staff "Two years ago we slowed it down to 38 miles an hour; now we've been able to park it then bring it back up to full speed." Lene Hau isn't talking about a used motorbike, but about light – that ethereal, life-sustaining stuff that normally travels 93 million miles from the sun in about eight minutes. Less than five years ago, the speed of light was considered one of the universe's great constants. Hau, 41, a professor of physics at Harvard, admits that the famous genius would "probably be stunned" at the results of her experiments. "It's nifty to look into the chamber and see a clump of ultracold atoms floating there," Hau says. She and her team continued to tweak their system until they finally brought light to a complete stop. Inspired by Hau's success at slowing light, researchers working on a wooded hill a few miles away at the Harvard-Smithsonian Center for Astrophysics (CfA) used a similar technique to stop, then restart, a light beam.

Personality And Psychology Tests I remember being fascinated by personality tests as a kid. I think it all started when I took a test in elementary school about what career I should be in, and from then I was hooked. I discovered other tests that told me about myself based ozsn my favorite color, tests which described my personality based on my food choices, etc. Since then I’ve learned much more about psychology, my personality and various validated psychological tests to determine facets of my personality type. I always felt like there was something missing from the standard ones I took though, even though they were largely accurate. [reddit-me] The irony of discussing online surveys immediately following my article about not wasting time online is not lost on me =). Also, RSS and Email Readers – I’ve included a lot of media in this article. Zimbardo Time Perspective Inventory (ZTPI) Two versions of the test: The full ZTPI as created by Dr. Background Information: I recently discovered this test after watching Dr. Dr.

Six Keys to Being Excellent at Anything - Tony Schwartz by Tony Schwartz | 2:21 PM August 24, 2010 I’ve been playing tennis for nearly five decades. I love the game and I hit the ball well, but I’m far from the player I wish I were. I’ve been thinking about this a lot the past couple of weeks, because I’ve taken the opportunity, for the first time in many years, to play tennis nearly every day. And almost certainly could be, even though I’m 58 years old. During the past year, I’ve read no fewer than five books — and a raft of scientific research — which powerfully challenge that assumption (see below for a list). We’ve found, in our work with executives at dozens of organizations, that it’s possible to build any given skill or capacity in the same systematic way we do a muscle: push past your comfort zone, and then rest. Like everyone who studies performance, I’m indebted to the extraordinary Anders Ericsson, arguably the world’s leading researcher into high performance. That notion is wonderfully empowering. Pursue what you love.

How Quantum Suicide Works" ­­A man sits down before a gun, which is pointed at his head. This is no ordinary gun; i­t's rigged to a machine that measures the spin of a quantum particle. Each time the trigger is pulled, the spin of the quantum particle -- or quark -- is measured. Depending on the measurement, the gun will either fire, or it won't. If the quantum particle is measured as spinning in a clockwise motion, the gun will fire. If the quark is spinning counterclockwise, the gun won't go off. Nervously, the man takes a breath and pulls the trigger. Go back in time to the beginning of the experiment. But, wait. This thought experiment is called quantum suicide.