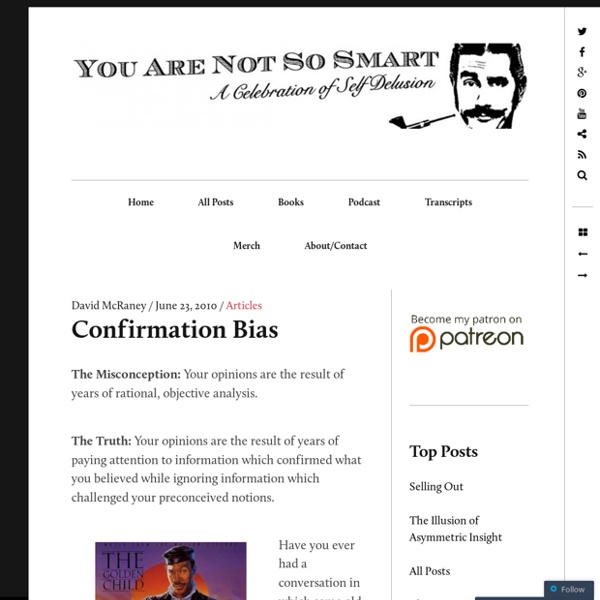 The Misconception: Your opinions are the result of years of rational, objective analysis. The Truth: Your opinions are the result of years of paying attention to information which confirmed what you believed while ignoring information which challenged your preconceived notions. Have you ever had a conversation in which some old movie was mentioned, something like “The Golden Child” or maybe even something more obscure? You laughed about it, quoted lines from it, wondered what happened to the actors you never saw again, and then you forgot about it. Until… You are flipping channels one night and all of the sudden you see “The Golden Child” is playing. What is happening here? Since the party and the conversation where you and your friends took turns saying “I-ah-I-ah-I want the kniiiife” you’ve flipped channels plenty of times; you’ve walked past lots of billboards; you’ve seen dozens of stories about celebrities; you’ve been exposed to a handful of movie trailers. “Be careful. Sources:

Confirmation bias Tendency of people to favor information that confirms their beliefs or values Confirmation bias, also known as myside bias, is the tendency to search for, interpret, favor, and recall information in a way that confirms or supports one's prior beliefs or values.[1] People display this bias when they select information that supports their views, ignoring contrary information, or when they interpret ambiguous evidence as supporting their existing attitudes. The effect is strongest for desired outcomes, for emotionally charged issues, and for deeply entrenched beliefs. Confirmation bias is a broad construct covering a number of explanations. A series of psychological experiments in the 1960s suggested that people are biased toward confirming their existing beliefs. Flawed decisions due to confirmation bias have been found in political, organizational, financial and scientific contexts. Definition and context[edit] Confirmation bias (or confirmatory bias) has also been termed myside bias.

The left brain is rational, and other lies you've been told about neuroscience to say one hemisphere is acting as a mere "backup of the other" is completely wrong. I agree, the plasticity of the brain is nothing short of extraordinary, however there are a couple things in your comment I couldn't help but comment on... first, a lobectomy is removal of a lobe in the brain (e.g. the temporal or parietal lobe), a hemispherectomy refers to the removal of an entire hemisphere of the brain. Although the neural and functional recovery of the patient is damn incredible, they will not have the FULL neural capacity as a child with a fully intact brain. Certain lobes are intrahemispheric rather than existing in both lobes. It is definitely safe to say that one hemisphere does not do anything close to acting as a backup for the other. Wow. The correct term is "hemispherectomy" and it's a very real thing that happens on occasion to treat severe seizures.

confirmation bias Confirmation bias refers to a type of selective thinking whereby one tends to notice and to look for what confirms one's beliefs, and to ignore, not look for, or undervalue the relevance of what contradicts one's beliefs. For example, if you believe that during a full moon there is an increase in admissions to the emergency room where you work, you will take notice of admissions during a full moon, but be inattentive to the moon when admissions occur during other nights of the month. A tendency to do this over time unjustifiably strengthens your belief in the relationship between the full moon and accidents and other lunar effects. This tendency to give more attention and weight to data that support our beliefs than we do to contrary data is especially pernicious when our beliefs are little more than prejudices. Numerous studies have demonstrated that people generally give an excessive amount of value to confirmatory information, that is, to positive or supportive data. reader comments

6 Possible Secrets to Happiness, According to Science As a scientist, let me add my 6 cents to the discussion: 1. This may actually work. 2. 3. 4. 5. 6. There you have it folks. Confirmation bias From Citizendium, the Citizens' Compendium Confirmation bias is a type of selective, wishful thinking, and an example of cognitive dissonance, where a person searches for or interprets evidence or information that matches their existing beliefs or predictions and ignores information that contradicts this. In short: cherry picking your evidence to match your conclusion. It is at the root of many types of pseudoscience and pseudohistory. The technique of cold reading, combined with the Forer effect, is an example of how a person may use someone's confirmation bias - a person who goes to a psychic or spiritualist session is going to want, often desperately, to hear from their deceased friends and relatives, and are quite willing to suspend their disbelief and ignore mistakes because of the emotional importance the 'hits' have.

Why Your Narrative is Wrong: How Your Mind Creates Narrative Out of Incomplete Info, then Refuses to Revise It Introduction Your narrative is wrong. Wait, you say, what do you mean by "narrative"? Narrative: a story or account of events, experiences, or the like,whether true or fictitious. (Dictonary.com) Note the last part: whether true or fictitious. Everybody has a narrative about something. Your narrative is "wrong", in the sense that it is NOT "the truth, the whole truth, and nothing but the truth." Human brain records experiences, not perfect memories, and the more surprising and emotional the experience, the more you remember them.Narratives are created out of these experiences by the "interpreter" in your brain, based on your pre-existing experiences, world-view, and biases, (i.e. context).Once you created a narrative, you are EXTREMELY reluctant to revise it. In most cases, this "wrong" narrative is of no real consequence. Experience vs. You probably think that your memory is like an old-style tape-based camcorder: It records exactly what happened, and the recorded signal fades over time.

What Is Rationality? | Center for Applied Rationality ########MKeenan disabled 2013-6-1######### The Story of Intel Semiconductor giant Intel was originally a memory chip manufacturer. But by 1985, memory chips had been losing them money for years. Andy Grove (CEO) and Gordon Moore met to discuss the problem. The mood was grim. Gordon replied without hesitation. “Okay,” said Andy. That year, Andy and Gordon shifted the focus of the company to microprocessors, and created one of the greatest success stories in American business. Andy and Gordon had been held hostage by a well-documented cognitive bias known as the “commitment effect” — in this case, an irrational commitment to their past identity as a memory chip manufacturer. During the last 40 years, psychologists have discovered that even high-IQ people like Andy Grove and Gordon Moore are prone to certain kinds of errors when thinking and deciding. What Rationality Is Not But that’s not what a cognitive scientist means when he or she uses the word “rationality.”