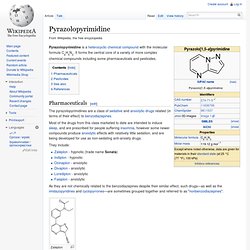 It forms the central core of a variety of more complex chemical compounds including some pharmaceuticals and pesticides. Panadiplon. Panadiplon (U-78875) is an anxiolytic drug with a novel chemical structure that is not closely related to other drugs of this type. 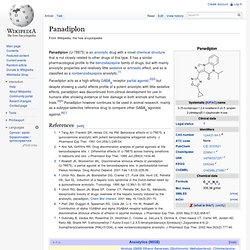 It has a similar pharmacological profile to the benzodiazepine family of drugs, but with mainly anxiolytic properties and relatively little sedative or amnestic effect, and so is classified as a nonbenzodiazepine anxiolytic.[1] Panadiplon acts as a high-affinity GABAA receptor partial agonist,[2][3] but despite showing a useful effects profile of a potent anxiolytic with little sedative effects, panadiplon was discontinued from clinical development for use in humans after showing evidence of liver damage in both animals and human trials.[4][5] Panadiplon however continues to be used in animal research, mainly as a subtype-selective reference drug to compare other GABAA agonists against.[6][7] Jump up ^ Tang AH, Franklin SR, Himes CS, Ho PM. 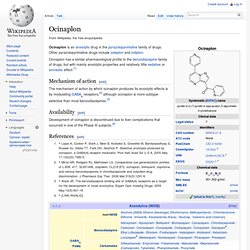 Other pyrazolopyrimidine drugs include zaleplon and indiplon. Ocinaplon has a similar pharmacological profile to the benzodiazepine family of drugs, but with mainly anxiolytic properties and relatively little sedative or amnestic effect.[1] Mechanism of action[edit] Indiplon. Indiplon (INN and USAN) is a nonbenzodiazepine, hypnotic sedative that was developed in 2 formulations - an immediate release product for sleep onset and a modified-release (a.k.a. controlled-release or extended-release) version for sleep maintenance. 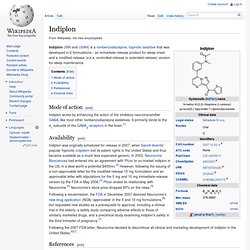 Mode of action[edit] Indiplon works by enhancing the action of the inhibitory neurotransmitter GABA, like most other nonbenzodiazepine sedatives. It primarily binds to the α1 subunits of the GABAA receptors in the brain.[1] Availability[edit] Indiplon was originally scheduled for release in 2007, when Sanofi-Aventis' popular hypnotic zolpidem lost its patent rights in the United States and thus became available as a much less expensive generic. Zaleplon. Zaleplon (marketed under the brand names Sonata, Starnoc and Andante) is a sedative-hypnotic, almost entirely used for the management/treatment of insomnia. 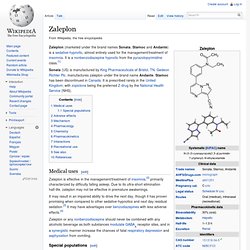 It is a nonbenzodiazepine hypnotic from the pyrazolopyrimidine class.[1] Sonata (US) is manufactured by King Pharmaceuticals of Bristol, TN. Gedeon Richter Plc. manufactures zaleplon under the brand name Andante. Starnoc has been discontinued in Canada. Beta-Carboline. Β-Carboline (9H-pyrido[3,4-b]indole) also known as norharmane is a nitrogen containing heterocycle. 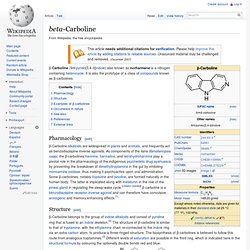 It is also the prototype of a class of compounds known as β-carbolines. Pharmacology[edit] β-Carboline alkaloids are widespread in plants and animals, and frequently act as benzodiazepine inverse agonists. As components of the liana Banisteriopsis caapi, the β-carbolines harmine, harmaline, and tetrahydroharmine play a pivotal role in the pharmacology of the indigenous psychedelic drug ayahuasca by preventing the breakdown of dimethyltryptamine in the gut by inhibiting monoamine oxidase, thus making it psychoactive upon oral administration. Some β-carbolines, notably tryptoline and pinoline, are formed naturally in the human body. Abecarnil. Abecarnil (ZK-112,119) is an anxiolytic drug from the β-Carboline family. 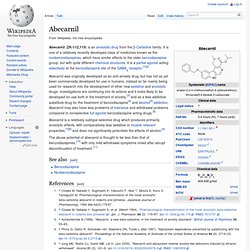 It is one of a relatively recently developed class of medicines known as the nonbenzodiazepines, which have similar effects to the older benzodiazepine group, but with quite different chemical structures. It is a partial agonist acting selectively at the benzodiazepine site of the GABAA receptor.[1][2] Abecarnil was originally developed as an anti-anxiety drug, but has not as yet been commercially developed for use in humans, instead so far mainly being used for research into the development of other new sedative and anxiolytic drugs.

ZK-93423. ZK-93423 is an anxiolytic drug from the β-Carboline family, closely related to abecarnil.[1] It is a nonbenzodiazepine GABAA agonist which is not subtype selective and stimulates α1, α2, α3, and α5-subunit containing GABAA receptors equally.[2] It has anticonvulsant, muscle relaxant and appetite stimulating properties comparable to benzodiazepine drugs.[3][4][5][6] ZK-93423 has also been used as a base to develop new and improved beta-carboline derivatives and help map the binding site of the GABAA receptor.[7][8][9][10][11][12] See also[edit] References[edit] Jump up ^ Zhang H, Larock RC (December 2002). 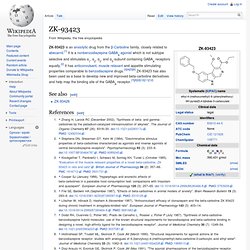 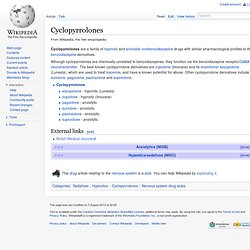 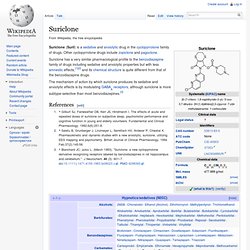 Other cyclopyrrolone drugs include zopiclone and pagoclone. Suriclone has a very similar pharmacological profile to the benzodiazepine family of drugs including sedative and anxiolytic properties but with less amnestic effects,[1][2] and its chemical structure is quite different from that of the benzodiazepine drugs. The mechanism of action by which suriclone produces its sedative and anxiolytic effects is by modulating GABAA receptors, although suriclone is more subtype-selective than most benzodiazepines.[3] Jump up ^ Gilburt SJ, Fairweather DB, Kerr JS, Hindmarch I. Suproclone. Suproclone is a sedative and anxiolytic drug in the cyclopyrrolone family of drugs, developed by the French pharmaceutical company Rhône-Poulenc.[1] Other cyclopyrrolone drugs include zopiclone, pagoclone and suriclone. Suproclone is very similar in structure to the related drug suriclone, but little information has been published about it specifically.

However it can be expected that the mechanism of action by which suproclone produces its sedative and anxiolytic effects is by modulating benzodiazepine receptors (resulting in an increased response to endogenous GABA), in a similar manner to other drugs of this class.[2][3] Jump up ^ Psychotropics.dk. Eszopiclone. Eszopiclone, marketed by Sunovion under the brand-name Lunesta, is a nonbenzodiazepine hypnotic which is slightly effective for insomnia.[2] Eszopiclone is the active dextrorotatory stereoisomer of zopiclone, and belongs to the class of drugs known as cyclopyrrolones.

Eszopiclone (Lunesta) along with other "Z-drugs" including zolpidem (Ambien), zaleplon (Sonata) are the most commonly prescribed sedative hypnotics in the US. Eszopiclone is not marketed in the European Union following a 2009 decision by the EMA denying it new active substance status,[3] in which it ruled that eszopiclone was too similar to zopiclone to be considered a new patentable product.[4] Zopiclone. Zopiclone (brand name Imovane in Canada, Australia, Sweden, Finland, Norway, Russia and the United Kingdom, brand name Zimovane in Europe) is a nonbenzodiazepine hypnotic agent used in the treatment of insomnia.

It is a cyclopyrrolone, which increases the normal transmission of the signal substance GABA in the central nervous system, as benzodiazepines do, but in a different way. Pagoclone. Pagoclone is an anxiolytic drug from the cyclopyrrolone family, related to better-known drugs such as the sleeping medication zopiclone. It was synthesized by a French team working for Rhone-Poulenc & Rorer S.A[1]. It is one of a relatively recently developed class of medicines known as the nonbenzodiazepines, which have similar effects to the older benzodiazepine group, but with quite different chemical structures. David Nutt from the University of Bristol has suggested pagoclone as a possible base from which to make a better social drug, as it produces the positive effects of alcohol, such as relaxation and sociability, but without also causing the negative effects like aggression, amnesia, nausea, loss of coordination and liver damage.

Imidazopyridine. The imidazopyridines are a class of drugs defined by their chemical structure. In general, they are GABAA receptor agonists, however recently proton pump inhibitors in this class have been developed as well. Despite usually being similar to them in effect, they are not chemically related to benzodiazepines. As such, GABAA agonizing imidazopyridines, pyrazolopyrimidines, and cyclopyrrones are sometimes grouped together and referred to as "nonbenzodiazepines.

Opioids work by binding to opioid receptors, which are found principally in the central and peripheral nervous system and the gastrointestinal tract. The receptors in these organ systems mediate the beneficial effects as well as the psychoactive and the side effects of opioids. Although the term opiate is often used as a synonym for opioid, the term opiate is properly limited to the natural alkaloids found in the resin of the opium poppy (Papaver somniferum), while opioid refers to both opiates and synthetic substances, as well as to opioid peptides.