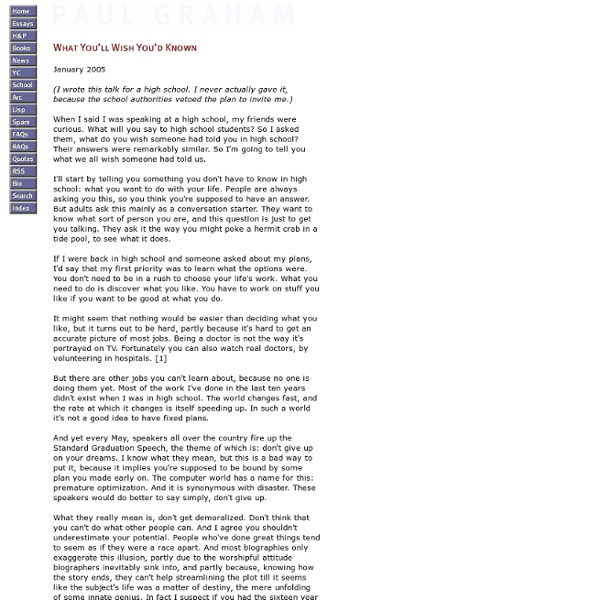 January 2005 (I wrote this talk for a high school. I never actually gave it, because the school authorities vetoed the plan to invite me.) When I said I was speaking at a high school, my friends were curious. What will you say to high school students? So I asked them, what do you wish someone had told you in high school? I'll start by telling you something you don't have to know in high school: what you want to do with your life. If I were back in high school and someone asked about my plans, I'd say that my first priority was to learn what the options were. It might seem that nothing would be easier than deciding what you like, but it turns out to be hard, partly because it's hard to get an accurate picture of most jobs. But there are other jobs you can't learn about, because no one is doing them yet. And yet every May, speakers all over the country fire up the Standard Graduation Speech, the theme of which is: don't give up on your dreams. Which is an uncomfortable thought. Upwind Now Related:  School • Wise

How to Get Through High School with Minimal Work: 5 steps Edit Article Edited by Brandon Johnson, Margaret Compton, Tom Viren, KnowItSome and 15 others High school can be overwhelming to some people, but with a little skill and some smooth talking, it's easy to get by doing very little. Ad Steps 1Determine early whether or not your teachers will give you notes over everything you should have read. 5Study for tests. Tips Schedule your study hall for the end of the day so that you can get your homework done and then go and hang out with your friends after school.Giving part of your breakfast in exchange for notes may be helpful.Stay on your teachers' good side! Warnings Make sure you always pay attention in class.Don't cheat because you will either be caught, feel guilty, commit a sin (if you have a religion that does not tolerate bad behavior), hate yourself for it, regret it, or worst case scenario, all of the above.

Constrictor knot History[edit] First called "constrictor knot" in Clifford Ashley's 1944 work The Ashley Book of Knots, this knot likely dates back much further.[5] Although Ashley seemed to imply that he had invented the constrictor knot over 25 years before publishing The Ashley Book of Knots,[1] research indicates that he was not its originator.[6] Ashley's publication of the knot did bring it to wider attention.[7] Although the description is not entirely without ambiguity, the constrictor knot is thought to have appeared under the name "gunner's knot" in the 1866 work The Book of Knots,[8][9] written under the pseudonym Tom Bowling.[10] in relation to the clove hitch, which he illustrated and called the "builder's knot". He wrote, "The Gunner's knot (of which we do not give a diagram) only differs from the builder's knot, by the ends of the cords being simply knotted before being brought from under the loop which crosses them."[11] Oddly, when J. Tying[edit] Variations[edit] Usage[edit] Releasing[edit]

What You Want to Do Is Who You Are Lovely post. I completely agree with it. Having undergone a recent tumultous personal loss that has put all housework on my shoulders apart from my office work, the todo lists are keeping me sane and on track. I have prepared a todo list for home and another for office. The todo for home consists of all important things to do such as bill payments, but also things that would be good to do, such as get a new mattress to replace the old one. Similarly, the todo for office consists of important tasks such as complete the pending report development (I am in IT), to improve on a specific skill. I may not be able to keep the list updated (though I try) everyday, atleast I have a clear understanding of the tasks that are pending. On another note - Lifehacker is my most favorite site and I visit it everyday. - Shailesh

Higher Learning Featuring Joss Whedon Creator of Buffy the Vampire Slayer, Angel, Firefly, and Dollhouse; writer and director of The Avengers. Zooey Deschanel Actor on screens small and big; half of the indie folk band She & Him; co-founder of hellogiggles.com, a comedy website for women. Dan Savage Author of the syndicated sex-advice column “Savage Love” and founder of the It Gets Better Project. JD Samson Music player/maker with Men and Le Tigre. Winnie Holzman Creator of the TV show My So-Called Life and writer (with Stephen Schwartz) of the musical Wicked. Jack Black Actor, comedian and musician. Alia Shawkat Actor (Arrested Development, The Runaways, Whip It, etc.). Lesley Arfin Staff writer for Rookie and for Girls, premiering on HBO in January. Kid Sister Rapstress, actress, professional snackstress. Fred ArmisenSNL cast member; co-star and co-creator (with Carrie Brownstein) of Portlandia. Anna Faris Actor (Lost in Translation, all the Scary Movies, etc.). Joss Whedon Rule One: DON’T BE LIKE THEM.

Session 1 Part 1 We tried to think about the most primitive information we have regarding our extraordinary experience, is that, I think we choose the fact that, all humanity has always been born naked, absolutely helpless, for months, and though with beautiful equipment, as we learn later on, with no experience, and therefore, absolutely ignorant. That's where all humanity has always started. And we've come to the point where, in our trial and error finding our way, stimulated by a designed in hunger designed in thirst these are conscious inputs; designed in procreative urge we have such an enormous amount of, as we learn later on, of designed in automated processing of the inter-relationships of all the atoms in our organism, starting then, with a consciousness of the hunger, giving a drive to go after...to seek to experiment. Man having, then, no rulebook, nothing to tell him about that Universe, has had to really find his way entirely by trial and error. Part 2 Next picture, please. Part 3

Deciding How We Age as We Age Seth Cochran If someone asked me to describe the Transhumanists I know in one word, I would say “ambitious”. We have some pretty lofty goals- immortality, mind enhancement, uploading. But ambition isn’t always enough. We have to make tough decisions about money, relationships, and education, sacrificing more than most to accomplish our goals. Breakdown of white-matter pathways affects decisionmaking as we age According to a poll by the Institute for Ethics and Emerging Technologies: A majority of IEET readers age 35 or older who answered our recently concluded poll say they expect to die within a normal human lifespan. Your brain is constantly changing, and as you age it changes for the worst. Being a youthful 21 years old, on a more personal note, I only have 20-40 years to make rational, well-informed decisions. What’s a Transhumanist to do? Regardless of your pursuit- be it cognitive enhancement, mind uploading, or immortality itself- you're going to need resources.

Study Before Bed for Significantly Better Retention This has worked for me for my GCSE's, A-levels and my degree: You know how you can always remember the first song you hear in the morning, and it gets stuck in your head for the rest of the day? I tried to apply this to revision. Basically, a month or so before your exams, take 5-6 pages of notes, nothing too in-depth, key stuff, equations, quotes etc, then stick them on the wall next to your bed, try to rotate the pages every couple of days. Then when you come to revising properly, the building blocks are already in place for you to make sense of the rest of it and remember it.

How To&8230; - StumbleUpon Embed This Infographic <a href= ‎"><img src=" title="10 How Tos" alt="How To Infographic" border="0" class="nopin" /></a><br />Source: <a href=' title='Interesting Facts'><a href=' title='Interesting Facts'>Today I Found Out</a></a> 1) How to drastically increase the life of your shaving razor Before or after you shave (I prefer before so that the blades are dry), place your jeans on a hard flat surface; then run the razor up the pant legs about 10-15 times quickly; then repeat running it down the pant legs 10-15 times quickly. No need to press that hard, but a little pressure is necessary. necessary. The threads on the jeans then will very effectively both fix any tiny bends in the blades that inevitably happen and will also sharpen the blades on your shaver cartidge.

Lessons from a master I have been re-watching the documentary “Jiro Dreams of Sushi” for the past couple of months. I’ve seen it at least 10 times, probably more, while writing drafts for this article. I’ve watched it alone, with my wife, with friends, and I don’t tire of it; I’ve recommended it to everyone I know, and now I’m wholeheartedly recommending it to you. This little gem of a documentary by David Gelb takes a look at the work and life of Jiro Ono, a Michelin three-star sushi chef who, at 85 years of age, continues to work on his craft every day at his tiny restaurant in a Tokyo office building basement opposite a subway station entrance. I have watched this film in fascination, trying to extract lessons from this master. You must fall in love with your work “Once you decide on your occupation,” says Jiro, “you must immerse yourself in your work. Jiro himself is enormously happy with his work; he is a blissful craftsman who truly enjoys his work, which keeps him vital in his old age.

Democratic education Democratic education is an educational ideal in which democracy is both a goal and a method of instruction. It brings democratic values to education and can include self-determination within a community of equals, as well as such values as justice, respect and trust. History[edit] The history of democratic education spans from at least the 1600s. Enlightenment era[edit] In 1693, John Locke published Some Thoughts Concerning Education. Jean-Jacques Rousseau’s book of advice on education, Émile, was first published in 1762. 19th century[edit] While Locke and Rousseau were concerned only with the education of the children of the wealthy, in the 19th century Leo Tolstoy set up a school for peasant children. 20th century[edit] Dom Sierot[edit] In 1912 Janusz Korczak founded Dom Sierot, the Jewish orphanage in Warsaw, which was run on democratic lines until 1940, when he accompanied all his charges to the gas-chambers of the Treblinka extermination camp.[9][10][11] Free schools movement[edit]

Coping with Grief Mind-Blowing Story: “Talking to God…” I met god the other day. I know what you’re thinking. How the hell did you know it was god? Well, I’ll explain as we go along, but basically he convinced me by having all, and I do mean ALL, the answers. Which is odd, because I’m still an atheist and we even agree on that! It all started on the 8.20 back from Paddington. What did he look like? Well not what you might have expected that’s for sure. ‘Anyone sitting here?’ ‘Help yourself’ I replied. Sits down, relaxes, I ignore and back to the correspondence on genetic foods entering the food chain… Train pulls out and a few minutes later he speaks. ‘Can I ask you a question?’ Fighting to restrain my left eyebrow I replied ‘Yes’ in a tone which was intended to convey that I might not mind one question, and possibly a supplementary, but I really wasn’t in the mood for a conversation. .. ‘Why don’t you believe in god?’ The Bastard! I love this kind of conversation and can rabbit on for hours about the nonsense of theist beliefs. ‘Who am I?’ ‘Stottle.