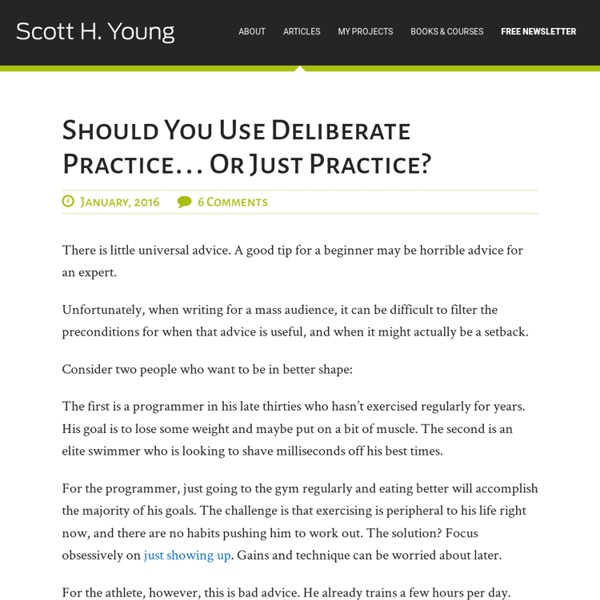 I recently had a chance to sit down with a friend who has been doing incredible things with his career and business. He offered to sit me down, walk through my current operations and help me figure out a strategy to take things to the next level. We ended up talking for a little over an hour, and the chat ended with a concrete plan for the next twelve months to redefine my strategy and mindset. It’s hard to say the impact this conversation will have, but I’m optimistic—the last time I had a serious chat with this person, it led to creating Learning on Steroids, which ended up saving my business and allowing me to go full-time as a writer. This person is incredibly busy and charges a lot for his time. Most people I know would have killed to get this kind of personalized advice, yet they probably won’t get it. Mentors Matter Because Most Knowledge is Hard to Write Down I’ve been lucky. Mentorship is incredibly important and it can shave years off your learning curve. This isn’t fair.

The Need to Address Noncognitive Skills in the Education Policy Agenda Introduction and executive summary Multiple traits compose a broad definition of what it means to be an educated person. Indisputably, being an educated person is associated with having a certain command of a curriculum, and knowledge of theories and facts from various disciplines. But the term educated also suggests a more far-reaching concept associated with individuals’ full development. Such development implies, for example, that individuals are equipped with traits and skills—such as critical thinking skills, problem solving skills, social skills, persistence, creativity, and self-control—that allow them to contribute meaningfully to society and to succeed in their public lives, workplaces, homes, and other societal contexts.

What is Lifestyle Design? What are you planning to do when you retire? Do you hope to travel, spend time with friends and family, take up new hobbies or volunteer to support a cause? How long will it take you to retire? For average people, it takes about 45 years, if you live that long. Maybe you’re hoping to retire sooner, in 30, or 20 or even 10 years by working hard. Why does it have to be that way? What does a doodle do? It boosts your memory and concentration You know you're bored when you start shading in the squares of your notebook. Apparently it's a habit that could be helping you to concentrate. In a neat little experiment, Jackie Andrade asked forty participants to listen to a monotone two and a half minute phone message about arrangements for a party. They were told the message would be dull, that there was no need to memorise it, but that they should write down the names of the people who would be able to attend the party. Crucially, half the participants were also told to 'doodle' as they listened, by shading in the squares and circles of their note-paper. Afterwards, the doodlers had noted fractionally more of the correct names (7.8 on average vs. 7.1 - a statistically significant difference).

Study Hacks - Decoding Patterns of Success - Cal Newport The Opposite of the Open Office October 19th, 2016 · 12 comments The Bionic Office A couple weeks ago, I wrote about Joel Spolsky’s claim that Facebook’s massive open office is scaring away talent. The comments on the post added many interesting follow ups; e.g., a pointer to a recent podcast episode where a Facebook developer claims the office is rarely more than a third full as people have learned to stay home if they want to produce anything deep. The Critical 7 Rules To Understand People My headline might sound overreaching. Clearly a rule can’t define something as complex as human behavior. But despite this, I’ve found most people tend to make the same mistakes.

6 Tips For Finding Motivation To Study This week I realized that in order to actually sit down and do some work (any work, really), we must be really motivated to do it. Since there is plenty of tasks we simply can’t get started on, I’ve come up with a few things that could help us get our study/combat/I-Can-Ace-Everything mode going: 1. 47 Decent Lifestyle Design Resources 79 Email Share Email Lifestyle design (LD) has a lengthy past but a short history . The art of (sometimes radical) lifestyle configuration, however, has been practiced for quite sometime by liberated people from all walks of life. 9 Tactics for Rapid Learning (That Most People Have Never Heard Of) Whenever the subject of why some people learn faster comes up, I get a whole host of common answers: Some people are just naturally smart. (Often implying you can’t improve)Everyone is “smart” in their own way. (Nonsense, research indicates different “intelligences” often correlate)IQ is all in the genes.