SaaS Metrics 2.0 – A Guide to Measuring and Improving what Matters 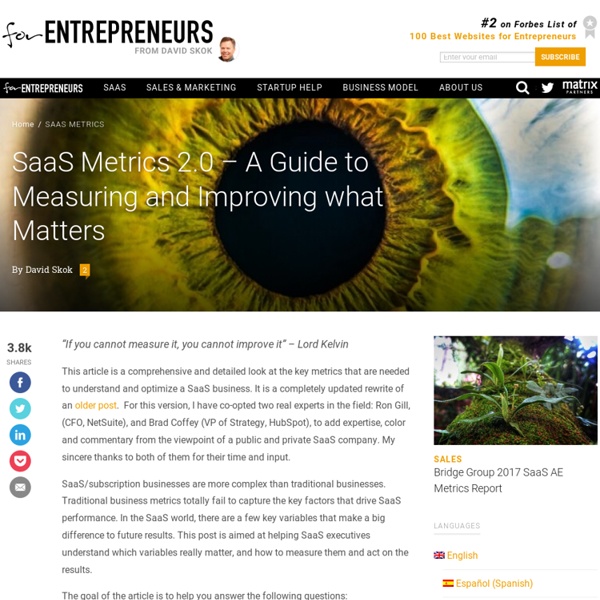 A tale of a support team – when Scrum leads to Kanban – Episode 2 – Mission Impossible « Control Your Chaos So the first thing we needed to do is to break that horrifying atmosphere. A manager sticking his nose into everything, knowledge transfer, to another company, organizational havoc, it all has taken its toll on the people. So I did something unexpected – I brought balloons into one of their meetings. This was the turning point. Changes in the technical elements were greater than ever. But most important is that they were setting their own goals. So what made the change possible? Breaking the lethargic atmosphere. You may not believe, but 4 months later this team got rid of the bug queue completely. Introducing new people got easier as well – due to tutorials and warning signs in the code, they at least didn’t mess up things. Their Definition Of Done evolved. Let’s sum up. Technology: as complex as it can be. I still remember one moment when on one of the retrospectives a team member that visited the customer organization the most told us story: But how does that lead to Kanban? Like this:

Evernote to change premium price as CEO says 'it was the wrong price' | Technology Cloud service Evernote is preparing to raise the price of its premium subscriptions in early 2015 from its current $5 a month, according to chief executive Phil Libin. “We’ve never changed our price: we launched seven years ago at $5 a month, but we realised a couple of years ago that it was the wrong price,” said Libin, speaking at the Web Summit conference in Dublin. “I know it was the wrong price because we picked it at random seven years ago and never changed it, so our chances of getting it right were very slim!” Libin said that Evernote has spent the last few months “trying to work out what the right price is” and plans to announce its plans early in 2015. “I think it can go up in some countries and probably down in some countries,” he said. Evernote currently has between eight and nine million paying users, according to its chief executive, who reaffirmed his belief that premium subscriptions rather than advertising are the best business model for his company. “We’re about work.

The critical metrics for each stage of your SaaS business (Guest post by Lars Lofgren of KISSmetrics) [My friend Lars is a product marketer at KISSmetrics and loves helping SaaS businesses understand how their business is growing. He writes regularly for the KISSmetrics blog and his personal marketing blog. He wrote the following post about SaaS products and the metrics you use to evaluate their success level. Lots of great information in there. How healthy is your SaaS business? We’re bombarded with KPIs and an endless series of metrics to tell us how we’re doing. But instead of using data to measure our progress, it’s much more likely that we get lost and start focusing on metrics that are easy to track but don’t mean anything. For a SaaS business, there are a few core metrics that need your undivided attention. In this post, I’m going to break down the essential metrics for each stage of a SaaS business. What this framework will give you: Let’s jump in. Before Product/Market FitYou’ve just made the decision to start your business and you’ve got plans for world domination. Primary Goals:

User Profiles - Relocate to another Partition or Disk How to Relocate User Profiles to another Partition or Disk in Windows 8 InformationThe method described in this tutorial allows relocating user profiles and folders already while installing Windows 8, before any user accounts are created, as well as after installation on an already installed system.The advantage of this method is that it changes some internal Windows 8 environment variables, being a “Do it once and forget” procedure. Changing the variables takes care of all existing and future user profiles, locating them when created to selected drive or partition. The method is fail proof and reversible.When Windows 8 is installed, 5 or 6 system folders are created depending on chosen bit-version:PerfLogs (Performance Logs), where Windows stores performance and reliability logsProgram Files, where applications and software are installed.

Keeping It Simple: Unit Economics Back in November, I wrote about financial modeling and wanted to pick up the topic again. I think this is very important for lean startups. A financial model focuses your brain on key goals and assumptions. When you are just starting, a fully-fledged financial model of your customer growth, revenue, and costs can feel daunting, so sometimes it is most useful to break the process into smaller tasks. For revenue estimates, try starting with a simple “unit economics” model, i.e. take your primary revenue model and lay out the revenue drivers and results for a single customer. detail the key levers for the business answer this question: how much revenue will we get every month for every active user we are able to recruit and keep? In our case, I built a simple calculation with 4 inputs: Every month, for every 1 user: N% will spend money They will buy O# number of item(s) The average transaction size will be P$ Our piece of the transaction will be Q% Thus, ARPU = N*O*P*Q Final Notes

Why Churn is SO critical to success in SaaS Summary: Illustrates graphically why churn is a huge problem a SaaS company gets larger. It also looks at a very surprising factor that can massively accelerate SaaS growth: negative churn. (This article is applicable to any recurring revenue business, not just SaaS.) Introduction As a SaaS company becomes larger, the size of the subscription base becomes large enough that any kind of churn against that base becomes a large number. The red and yellow lines show the lost revenue due to customers cancelling their subscriptions (churn). Looking at the graph above, we can see that Churn is really not that big of a number in the early startup months. The graph below shows the impact on Total MRR (monthly recurring revenue) of each scenario, which is fairly substantial. The Impact of Negative Churn It is possible to run a SaaS, or any other kind of recurring revenue, business in such a way as to get what I call Negative Churn. The result is quite shocking. It’s an amazing result.

Why Lead Velocity Rate (LVR) Is The Most Important Metric in SaaS One thing that is great in SaaS, from a 20,000 foot perspective at least, is You Can See The Future. It’s the benefit of a recurring revenue stream in a B2B model. If you did $100k last month, and have grown 6% a month each month for the last 12 mos, I can pretty much say you’ll be a $2m+ ARR business in the next twelve months or so. The thing is, sales is variant, and sales pipelines have big data quality issues — and worse, sales as a metric is a lagging indicator. >> But there’s a better metric, your Key Metric, you should track and score yourself to, and hold your VP Marketing and marketing team to – Qualified Lead Velocity Rate (LVR), your growth in qualified leads, measure month-over-month, every month. As long as you are using Qualified Leads, and you use a consistent formula and process to qualify them, you can then See The Future: If the leads keep coming in, and sales growth does not track your lead growth, you’ll know you have one of two problems: And you know what? Like this: