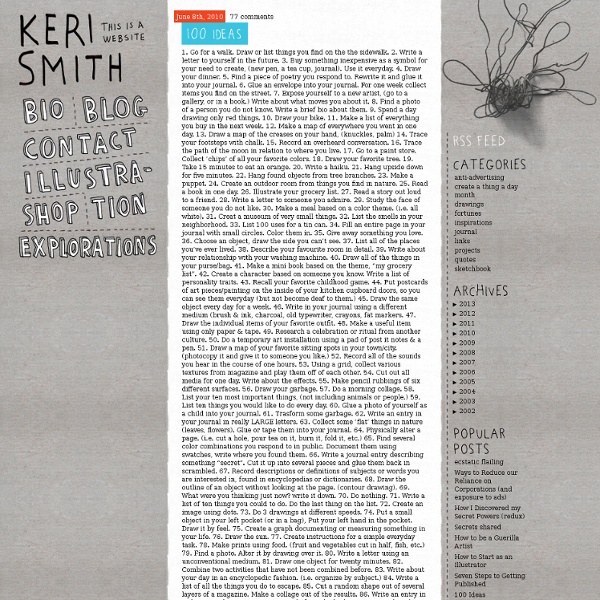 Tackle Any Issue With a List of 100 The List of 100 is a powerful technique you can use to generate ideas, clarify your thoughts, uncover hidden problems or get solutions to any specific questions you’re interested in. The technique is very simple in principle: state your issue or question in the top of a blank sheet of paper and come up with a list of one hundred answers or solutions about it. “100 Ways to Generate Income”, “100 Ways to be More Creative” or “100 Ways to Improve my Relationships” are some examples. “One hundred entries? Isn’t that way too many?” Bear with me: it’s exactly this exaggeration that makes the technique powerful. When starting your list you may believe that there’s no way to get it done. Unlike the related Idea Quota tool — whose primary goal is to acquire the habit of coming up with ideas — the goal of a List of 100 is to take your mind by surprise. Ground Rules There are only two simple principles to keep in mind when making Lists of 100: 1. 2. The Dynamics of Making Lists of 100 1. 2. 3.

Create a cryptocurrency contract in Ethereum The Coin We are going to create a digital token. Tokens in the Ethereum ecosystem can represent any fungible tradable good: coins, loyalty points, gold certificates, IOUs, in-game items, etc. Since all tokens implement some basic features in a standard way, this also means that your token will be instantly compatible with the Ethereum wallet and any other client or contract that uses the same standards. Minimum Viable Token The standard token contract can be quite complex. The code But if you just want to copy paste a more complete code, then use this: Understanding the code So let's start with the basics. contract MyToken { /* This creates an array with all balances */ mapping (address => uint256) public balanceOf; } A mapping means an associative array, where you associate addresses with balances. function MyToken() public { balanceOf[msg.sender] = 21000000; } Notice that the function MyToken has the same name as the contract MyToken. Finally, we now need something called Events. Autorefill

Tests of general relativity The very strong gravitational fields that must be present close to black holes, especially those supermassive black holes which are thought to power active galactic nuclei and the more active quasars, belong to a field of intense active research. Observations of these quasars and active galactic nuclei are difficult, and interpretation of the observations is heavily dependent upon astrophysical models other than general relativity or competing fundamental theories of gravitation, but they are qualitatively consistent with the black hole concept as modelled in general relativity. As a consequence of the equivalence principle, Lorentz invariance holds locally in freely falling reference frames. Experiments related to Lorentz invariance and thus special relativity (i.e., when gravitational effects can be neglected) are described in Tests of special relativity. Classical tests[edit] The chief attraction of the theory lies in its logical completeness. Perihelion precession of Mercury[edit]

56 Things To Do Instead of Spending Money - And Then We Saved Not spending money? No need to worry there’s lots to do! 56 Things To Do Instead of Spending Money… 1. Read the archives of your favorite blogs We all have our favorite blogs and websites; see what the beginning was like by digging through the archives. 2. Even if you have no kids (and don’t know any) you can throw some sheets over a few chairs and a table, toss in some blankets and pillows and pretend like you’re a kid again. 3. If you’re one of the 104.4 million Pinterest users then this one is for you. 4. Break out of any food rut that might be building and come up with some new meal ideas using only the foods that you already own. 5. That hem that’s come loose, the hole that needs patching, the button that’s hanging on my literally 2 thin threads; nows the time to get that pile of To-Do’s taken care of. 6. Check out all of their movies from the library or watch them all on Netflix. 7. that you’ll actually use! 8. 9. It’s only scary the first time (really!) 10. 11. 12. 13. 14. 15. 16.

How to Make Your Own Homemade Tiger Balm: Recipes that Work! - NaturalON Photo credit: bigstock.com When you go to the gym or play a particularly hard game of ball, or even just moving into a new house, you can find yourself with aches and pains from sore muscles. Nothing works quite as well as a soothing application of Tiger Balm. Things You Will Need: BeeswaxEucalyptus oilClove oilCoconut oilExtra virgin olive oilPeppermint essential oilHerbs: sage, willow, wintergreen, black haw (these are optional)Glass jar or metal containerWash cloth or other type of soft cloth Basic Tiger Balm Recipe 1. 2. 3. 4. 5. Continue to Page 2 Tiger Balm Recipe #2 This recipe might be a bit warmer than others, but it feels so good on sore muscles! Ingredients: 10 Drops Camphor essential oil9 Drips Peppermint essential oil8 Drops Eucalyptus essential oil5 Drops Clove essential oil5 Drops Cinnamon essential oil1 Ounce beeswax¼ Cup of either coconut, almond, or olive oil SEE ALSO: Which Medical Miracle is Sitting Right in Your Own Bathroom? Follow the same directions as above.

Graviton Theory[edit] The three other known forces of nature are mediated by elementary particles: electromagnetism by the photon, the strong interaction by the gluons, and the weak interaction by the W and Z bosons. The hypothesis is that the gravitational interaction is likewise mediated by an – as yet undiscovered – elementary particle, dubbed as the graviton. In the classical limit, the theory would reduce to general relativity and conform to Newton's law of gravitation in the weak-field limit.[6][7][8] Gravitons and renormalization[edit] When describing graviton interactions, the classical theory (i.e., the tree diagrams) and semiclassical corrections (one-loop diagrams) behave normally, but Feynman diagrams with two (or more) loops lead to ultraviolet divergences; that is, infinite results that cannot be removed because the quantized general relativity is not renormalizable, unlike quantum electrodynamics. Comparison with other forces[edit] Gravitons in speculative theories[edit] See also[edit]

20 Things to Do With Urine Besides Flushing It I’ve done two things with pee — flushed it and pushed it across the counter in a cup for a lab tech to tell me what was the matter with me. I bet your list is about the same. So if urine is “waste,” we’re the ones who are wasting it. Check out these 20 ways humans have put their micturation to better use… Make your race car more durable In the early 1980s, BMW engineers stored their Formula 1 engine blocks out in the cold and peed on them to help harden the metal so that they could withstand the force of turbocharged racing. Grow new teeth “Tooth is vital not only for a good smile, but also good health,” reads the abstract of a recent Chinese study… Yet, we lose tooth regularly due to accidents or diseases. Soften leather Over time, the urea in urine decays into ammonia, and Roman tanners soaked hides in it to help loosen and remove pieces of hair and flesh and to soften it for tanning. Fashion a makeshift gas mask Launder stains and keep the brights bright Sterilize lopped-off body parts Next

No Idea Left Behind: 25 Tools for Capturing Ideas Anywhere As a serial entrepreneur, I’m addicted to ideas. I feed off of ’em. And nothing makes me more upset than having a great idea… and losing it. The problem with ideas is that they’re situational. In order to capture every single little idea that we have, we’ll need to take a multi-pronged approach to capturing the little bits of genius that we have throughout our day. I should note that we’re not talking about complex systems like mind mapping and other GTD systems. Analog Idea Capture Analog idea capturing is the oldest and one of the most useful forms of idea capture. Hipster PDA. Pocket Briefcase. Moleskine. Rite in the Rain notepad Rite in the Rain. Write boards. Sticky notes. Mac Software Mac users pride themselves on the amount and quality of organization and productivity apps. Quicksilver appending to text file. Quicksilver. Probably the easiest way to capture ideas is to append text to an existing document. iGTD. iGTD is an excellent piece of free GTD software. OmniFocus. Launchy.

5 Secrets to a ‘No-work’ Garden It took over 20 years of gardening to realize that I didn’t have to work so hard to achieve a fruitful harvest. As the limitless energy of my youth gradually gave way to the physical realities of mid-life, the slow accretion of experience eventually led to an awareness that less work can result in greater crop yields. Inspired in part by Masanobu Fukuoka’s book, One Straw Revolution, my family experimented with gardening methods which could increase yields with less effort. Fukuoka spent over three decades perfecting his so-called “do-nothing” technique: commonsense, sustainable practices that all but eliminate the use of pesticides, fertilizer, tillage, and perhaps most significantly, wasteful effort. Here are the strategies we used which enabled us to greatly increase our garden yield, while requiring less time and less work. 1. With ‘no-till’ gardening, weeding is largely eliminated. 2. Gardeners are always on the lookout for free sources of clean organic mulch to add to their garden.

Gravity Probe B - Special & General Relativity Questions and Answers It is true that, given enough energy, you could be propelled so fast that 1 year back home would pass for you in a few minutes; a ride across the Milky Way covering 100,000 light years could be done in a few seconds; or even a ride across the visible universe of 14 billion light years could be done in a second or less...given an ultimate source of power to get you to those speeds. For a photon, or any other particle traveling at ESSENTIALLY the speed of light, any arbitrarily long distance could be traversed in less than a second....but eternity is different. For you to get boosted to a speed where 'eternity would pass in an instant' you would travel essentially an infinite distance, and the energy you would need to accelerate you would be infinite as well. For a photon, it is a completely meaningless exercise to ask how fast time passes for a photon, and in some sense in the 'rest frame' of such a massless particle, time is meaningless. All answers are provided by Dr.