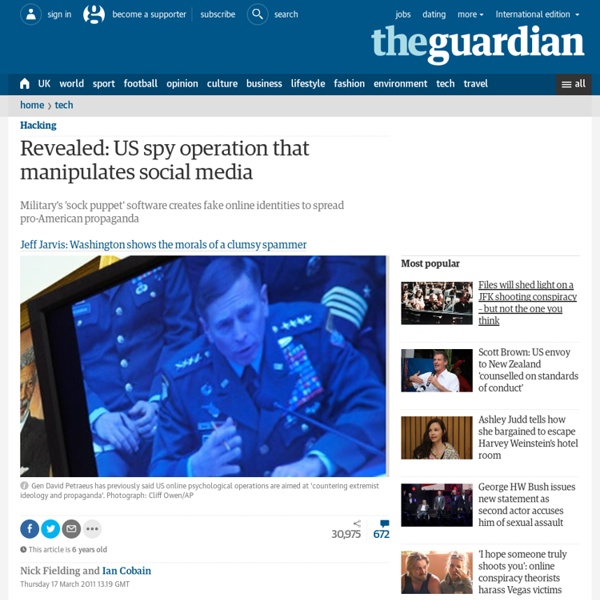 The US military is developing software that will let it secretly manipulate social media sites by using fake online personas to influence internet conversations and spread pro-American propaganda. A Californian corporation has been awarded a contract with United States Central Command (Centcom), which oversees US armed operations in the Middle East and Central Asia, to develop what is described as an "online persona management service" that will allow one US serviceman or woman to control up to 10 separate identities based all over the world. The project has been likened by web experts to China's attempts to control and restrict free speech on the internet. Critics are likely to complain that it will allow the US military to create a false consensus in online conversations, crowd out unwelcome opinions and smother commentaries or reports that do not correspond with its own objectives. OEV is seen by senior US commanders as a vital counter-terrorism and counter-radicalisation programme.

Magnetic North Pole Shifts, Forces Runway Closures at Florida Airport - FoxNews.com A computer simulation shows the Earth's magnetic field lines and two poles, with blue lines directed inward and yellow lines directed outward.Gary A. Glatzmaier / UCSC The planet's northern magnetic pole is drifting slowly but steadily towards Russia -- and it's throwing off planes in Florida. Tampa International Airport was forced to readjust its runways Thursday to account for the movement of the Earth's magnetic fields, information that pilots rely upon to navigate planes. Thanks to the fluctuations in the force, the airport has closed its primary runway until Jan. 13 to change taxiway signs to account for the shift, the Federal Aviation Administration said. The poles are generated by movements within the Earth's inner and outer cores, though the exact process isn't exactly understood.

False Flags In Syria: An Operation 50 Years In the Making? Governments Routinely Conduct Fake Terror Don’t believe all of the mainstream reports (roundup here) that the U.S. is supporting false flag attacks carried out by Al Qaeda against Syria? The BBC reports that the British and American leaders seriously considered false flag attacks in Syria in 1957: in 1957 Harold Macmillan and President Dwight Eisenhower approved a CIA-MI6 plan to stage fake border incidents as an excuse for an invasion by Syria’s pro-western neighbours, and then to “eliminate” the most influential triumvirate in Damascus….The report said that once the necessary degree of fear had been created, frontier incidents and border clashes would be staged to provide a pretext for Iraqi and Jordanian military intervention.

NTEB: Did HAARP Kill Thousands Of Birds And Fish Simultaneously Across Country? Did HAARP Kill Thousands Of Birds And Fish Simultaneously Across Country? Secret Government Testing Suspected "I will consume man and beast; I will consume the fowls of the heaven, and the fishes of the sea, and the stumblingblocks with the wicked; and I will cut off man from off the land, saith the LORD." Zephaniah 1:3 Like science fiction. Still 'paranoid' after all these years Paranoia isn't on the fringe anymore. It's now closer to the beating heart of the mainstream. A strain of mistrust has long run through American historyHistorian traced the trend in 1964 essay, "The Paranoid Style in American Politics"It's easy to think of such paranoia as fringe, but it's increasingly mainstreamCan we overcome our fears? Not in the current climate -- though maybe eventually "We do not see things as they are; we see things as we are." -- Anais Nin

But That's Not Stopping the FBI From Raiding Activists' Homes July 8, 2011 | Like this article? Join our email list: Stay up to date with the latest headlines via email. In the early morning of May 17, longtime anti-war and immigrant rights activist Carlos Montes awoke to the startling sound of the Los Angeles County Sheriff's Department SWAT Team breaking down his door. "They came in with guns on their shoulders, yelling. CIA under scrutiny over Benghazi attack, Republicans take aim at Obama Since the September 11 assault in Benghazi that killed US ambassador Christopher Stevens and three other Americans, President Barack Obama, the State Department and the Pentagon have come under fire. Republican supporters of Obama's rival Mitt Romney pounced on the issue in a hard-fought presidential campaign, keeping it in the spotlight. Due to the clandestine nature of its work, the Central Intelligence Agency had initially had been spared from scrutiny, but now the spy service and its director, former army general David Petraeus, are on the defensive. Media reports now question the CIA's actions and The Wall Street Journal suggested Friday the agency's fixation with secrecy may have led to confusion over security at the compound and crossed signals with the State Department.

Iceland, a country that wants to punish the bankers responsible for the crisis Since 2008 the vast majority of the Western population dream about saying “no” to the banks, but no one has dared to do so. No one except the Icelanders, who have carried out a peaceful revolution that has managed not only to overthrow a government and draft a new constitution, but also seeks to jail those responsible for the country’s economic debacle. Last week 9 people were arrested in London and Reykjavik for their possible responsibility for Iceland’s financial collapse in 2008, a deep crisis which developed into an unprecedented public reaction that is changing the country’s direction. It has been a revolution without weapons in Iceland, the country that hosts the world’s oldest democracy (since 930), and whose citizens have managed to effect change by going on demonstrations and banging pots and pans. Why have the rest of the Western countries not even heard about it?

Star Trek, Batman, The Avengers: All Anti-Empathy Entertainments - Noah Berlatsky The cutthroat behind-the-scenes histories of superhero and sci-fi franchises jibe philosophically with the stories those franchises tell: Icons matter, and people don't. Paramount Art, we're often told, encourages empathy. By watching or reading about different people, or different situations, we become able to understand and sympathize with a broader range of perspectives. 'Bomber? My son fell into US trap' 'Bomber? My son fell into US trap' Quazi Mohammad Ahsanullah, father of Quazi Mohammad Rezwanul Ahsan Nafis, holds a photograph of his son inside his residence at Uttar Jatrabari in Dhaka October 18, 2012. The FBI on Wednesday arrested Nafis, a Bangladeshi, in a sting operation on charges he attempted to blow up the New York Federal Reserve Bank with what he believed was a 1,000-pound (450-kg) bomb, federal authorities said. Nafis, 21, faces charges of attempting to use a weapon of mass destruction and attempting to provide material support to al Qaeda, the U.S.

Quality of Greek protests fail to impress British rioters Greece has become the most recent country to enter the running for the Best Violent Protest prize, amid French criticism that the UK unfairly disadvantaged nations without a monarchy by poking the Duchess of Cornwall with a stick. The Greek mob opened its protest against austerity measures yesterday with the expected strategy of petrol bombing and vandalism outside the parliament building in Athens, which police countered with a solid tear-gas defence. However, in later rounds the quick-thinking rioters showed their true class and initiative by chasing and beating a government minister who happened to pop out for a souvlaki. “The Brits have made it tough, definitely.”

Sandy Hook hoax is falling apart - National Policy & Issues The dam finally burst this week as the mainstream media was forced to begin addressing the many very serious unanswered questions regarding the alleged Sandy Hook elementary school massacre. Despite the fact that people questioning the official narrative has become one of the hottest media topics of the week, there's a very real possibility the right questions may never get asked in any meaningful way, at least not publicly. But with so many openly obvious anomalies, ridiculous coincidences and projected media falsehoods surrounding the event, people are figuring out what's actually happening on their own and hundreds of the largest media outlets around the country have had no choice but to talk about or, depending on who you talk to, attempt avoiding those circumstances to mostly avoid being seen as complicit.

The Death of the Hard Drive - FoxNews.com The Caviar Green hard disk drive from Western Digital.Western Digital Stop worrying about when the hard drive in your computer will die. Google wants to kill it permanently anyway. The new Google Chrome operating system, which was unveiled Tuesday, as well as hints and suggestions from Apple and Microsoft, offers us a preview of the PC of the future. ‘Drones causing mass trauma among civilians,’ major study finds An armed US Reaper drone over Afghanistan (U.S. Air Force/Lt Col Leslie Pratt/ Flickr) The near constant presence of CIA drones ‘terrorises’ much of the civilian population of Pakistan’s tribal areas according to a new report. Men, women and children are subjected to almost constant trauma – including fear of attack, severe anxiety, powerlessness, insomnia and high levels of stress – says a nine month investigation into CIA drone strikes in Pakistan by two top US university law schools. More than 130 ‘victims, witnesses and experts’ were interviewed in Pakistan for the study.

Students set to find out just how effective violent protest is Students across the country are set to learn an important life lesson today when the government completely ignores all of their protests to vote in a significant rise in tuition fees. There have been a large number of angry protests across the country, as the student body mobilised for an important lesson in futility. Psychologist William Morris told us, “Learning about the futility of our rebellious actions in the face of authority is something many of us never truly understand until we get a job or a career.” ” But these students are being given the opportunity to learn just how the world really works whilst still in full-time education.”