Look for Military Drones to Begin Replacing Police Helicopters by 2025. General Atomics is working hard to put a close cousin of its Reaper anti-terrorism drone in the hands of local law enforcement. 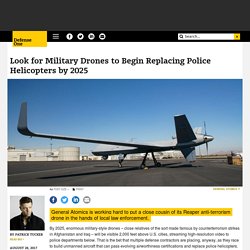 By 2025, enormous military-style drones – close relatives of the sort made famous by counterterrorism strikes in Afghanistan and Iraq – will be visible 2,000 feet above U.S. cities, streaming high-resolution video to police departments below. That is the bet that multiple defense contractors are placing, anyway, as they race to build unmanned aircraft that can pass evolving airworthiness certifications and replace police helicopters. And if that bet pays off, it will radically transform the way cities, citizens, and law enforcement interact.

There’s a reason big drones like the General Atomics Reaper aren’t already flying over the United States. The federal rules that govern aircraft in U.S. airspace are much stricter than those that cover U.S. military drones overseas. Subscribe Receive daily email updates: Subscribe to the Defense One daily. 1.8 gigapixel ARGUS IS. World's highest resolution video surveillance platform by DARPA. Blimplike surveillance craft set to deploy over Maryland heighten privacy concerns. They will look like two giant white blimps floating high above I-95 in Maryland, perhaps en route to a football game somewhere along the bustling Eastern Seaboard. 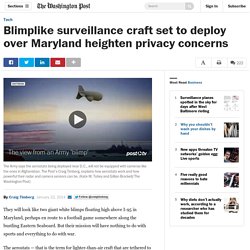 But their mission will have nothing to do with sports and everything to do with war. New surveillance technology can track everyone in an area for several hours at a time. DAYTON, Ohio — Shooter and victim were just a pair of pixels, dark specks on a gray streetscape. 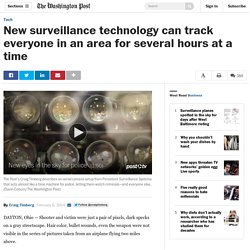 Hair color, bullet wounds, even the weapon were not visible in the series of pictures taken from an airplane flying two miles above. But what the images revealed — to a degree impossible just a few years ago — was location, mapped over time. Second by second, they showed a gang assembling, blocking off access points, sending the shooter to meet his target and taking flight after the body hit the pavement. When the report reached police, it included a picture of the blue stucco building into which the killer ultimately retreated, at last beyond the view of the powerful camera overhead. “I’ve witnessed 34 of these,” said Ross McNutt, the genial president of Persistent Surveillance Systems, which collected the images of the killing in Ciudad Jurez, Mexico, from a specially outfitted Cessna.

Video: A time machine for police, letting them watch criminals — and everyone else. Surveillance planes spotted in the sky for days after West Baltimore rioting. As Benjamin Shayne settled into his back yard to listen to the Orioles game on the radio Saturday night, he noticed a small plane looping low and tight over West Baltimore — almost exactly above where rioting had erupted several days earlier, in the aftermath of the death of a black man, Freddie Gray, in police custody. 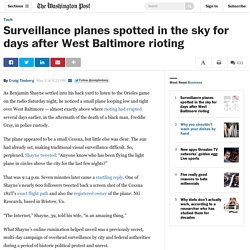 The plane appeared to be a small Cessna, but little else was clear. The sun had already set, making traditional visual surveillance difficult. So, perplexed, Shayne tweeted: “Anyone know who has been flying the light plane in circles above the city for the last few nights?” That was 9:14 p.m. Seven minutes later came a startling reply. Airborne Wide Area Persistent Surveillance. BAE Systems Airborne Wide Area Persistent Surveillance System (AWAPSS) is an unblinking eye in the sky commanding a persistent watch over troubled areas to provide decision makers with useful and focused information. 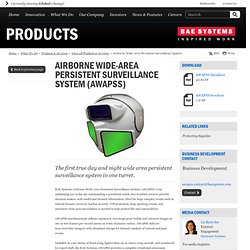 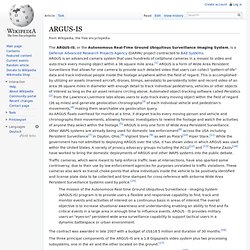 ARGUS is an advanced camera system that uses hundreds of cellphone cameras in a mosaic to video and auto-track every moving object within a 36 square mile area.[1] ARGUS is a form of Wide Area Persistent Surveillance that allows for one camera to provide such detailed video that users can collect "pattern-of-life" data and track individual people inside the footage anywhere within the field of regard. This is accomplished by utilizing air assets (manned aircraft, drones, blimps, aerostats) to persistently loiter and record video of an area 36 square miles in diameter with enough detail to track individual pedestrians, vehicles or other objects of interest as long as the air asset remains circling above. The contract was awarded in late 2007 with a budget of US$18.5 million and duration of 30 months.[16] 1.8 gigapixel ARGUS-IS. World's highest resolution video surveillance platform by DARPA. DARPA's new 1.8-gigapixel camera is a super high-resolution eye in the sky.

Police Are Testing a "Live Google Earth" To Watch Crime As It Happens.