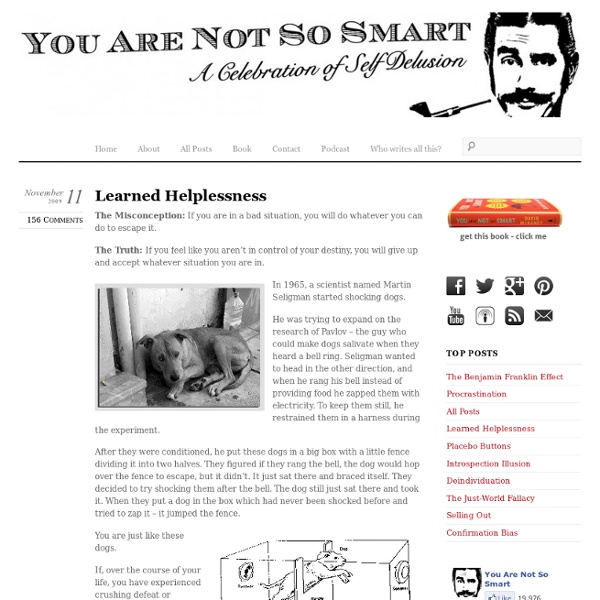 The Misconception: If you are in a bad situation, you will do whatever you can do to escape it. The Truth: If you feel like you aren’t in control of your destiny, you will give up and accept whatever situation you are in. In 1965, a scientist named Martin Seligman started shocking dogs. He was trying to expand on the research of Pavlov – the guy who could make dogs salivate when they heard a bell ring. Seligman wanted to head in the other direction, and when he rang his bell instead of providing food he zapped them with electricity. To keep them still, he restrained them in a harness during the experiment. After they were conditioned, he put these dogs in a big box with a little fence dividing it into two halves. You are just like these dogs. If, over the course of your life, you have experienced crushing defeat or pummeling abuse or loss of control, you learn over time there is no escape, and if escape is offered, you will not act – you become a nihilist who trusts futility above optimism.

Unpaid Labor, On Purpose: Why We Volunteer At the San Francisco literacy center where I work, I see more than 40 volunteers every week. They drive an hour from Intel or ride the bus from high school to read with a kid for at least 45 minutes for $0. Some are required to volunteer as part of a class, but most are there of their own free will. Why do they do it? Don’t get me wrong, I’m not trying to go all Ayn Rand and suggest that everyone should have a selfish motive for their actions. But I do think the choice to volunteer is a curious one, and that a mix of intentions drive otherwise practical people to work for free. 10 Simple Postures That Boost Performance Psychological research suggests simple actions can project power, persuade others, increase empathy, boost cognitive performance and more… We tend to think of body language as something that expresses our internal states to the outside world. But it also works the other way around: the position of our body also influences our mind. As the following psychological research shows, how we move can drive both thoughts and feelings and this can boost performance. 1.

Five Tips for Fostering Learning in the Classroom August 5, 2013 By: Karen Spencer in Effective Teaching Strategies During the final meeting with one of my speech classes, I asked each student to give a few parting words to the class. I found a similar message resonating from many who spoke. Soon after, I received an email from an advisor at our school asking me to share some tips on fostering learning in the classroom. Since I had recorded that final speech class, I decided to use my students’ comments as the basis for my advice. Beautiful Perth: 2% or 98% of Population? Just follow these instructions, and answer the questions one at a time and as quickly as you can! Again, as quickly as you can but don't advance until you've done each of them .... really. Now, scroll down (but not too fast, you might miss something).

The Top 10 Psychology Studies of 2010 The end of 2010 fast approaches, and I'm thrilled to have been asked by the editors of Psychology Today to write about the Top 10 psychology studies of the year. I've focused on studies that I personally feel stand out, not only as examples of great science, but even more importantly, as examples of how the science of psychology can improve our lives. Each study has a clear "take home" message, offering the reader an insight or a simple strategy they can use to reach their goals , strengthen their relationships, make better decisions, or become happier. If you extract the wisdom from these ten studies and apply them in your own life, 2011 just might be a very good year. 1) How to Break Bad Habits If you are trying to stop smoking , swearing, or chewing your nails, you have probably tried the strategy of distracting yourself - taking your mind off whatever it is you are trying not to do - to break the habit.

Last Word On Mozilla I wrote about the Mozilla CEO termination thing (I, II, III). The point of my writing on it was just to continue my long-standing project of pointing out that most procedural arguments — by which I mean content-neutral and substance-neutral arguments nominally divorced from policy and cultural preferences — are not serious. It seems to me that most people have some extreme limit to the kind of processes they are willing to use, but within that limit, they just use and find arguments for whatever processes lean towards their preferred substantive outcomes. In making this point, I have not (as you would expect) tried to make some procedural justification for firing people for their political views. I have not tried to make some procedural justification for market coercion or civil coercion.

Color Psychology by David Johnson Like death and taxes, there is no escaping color. It is ubiquitous. Yet what does it all mean? Why are people more relaxed in green rooms? A Printable Guide To Creative Commons Something you probably see a lot of these days as you browse the internet is Creative Commons licensing. You’ll see many graphics that say something like ‘shared under a Creative Commons license’, or you’ll see a little rectangular graphic with some signs in them. Since we live in an age where most of our information comes from the internet in some way or another, its useful to know when and how it is ok to use something that you’ve found. We’ve already taken a look at some fair use guidelines (which comes along with a brief mention of Creative Commons licensing), but we thought that this handy infographic below gave a great, easy to read and understand version of the different types of CC licenses available.

Fun Facts Fun Facts that you always wanted to know ........!!! If you yelled for 8 years, 7 months and 6 days, you would have produced enough sound energy to heat one cup of coffee. The strongest muscle in proportion to its size in the human body is the tongue. Every time you lick a stamp, you're consuming 1/10 of a calorie.

The Ten Most Revealing Psych Experiments Psychology is the study of the human mind and mental processes in relation to human behaviors - human nature. Due to its subject matter, psychology is not considered a 'hard' science, even though psychologists do experiment and publish their findings in respected journals. Some of the experiments psychologists have conducted over the years reveal things about the way we humans think and behave that we might not want to embrace, but which can at least help keep us humble. That's something. 1. 'Lord of the Flies': Social Identity Theory