Molecular phylogeny of Harpactorinae and Bactrodinae uncovers complex evolution of sticky trap predation in assassin bugs (Heteroptera: Reduviidae) - Zhang - 2015 - Cladistics. Bees Prove They Are Highly Intelligent To Amazed Scientists… Bee videos ave been making waves on social media as people begin to realize that the tiny insects are actually much more intelligent than anyone has ever given them credit for. 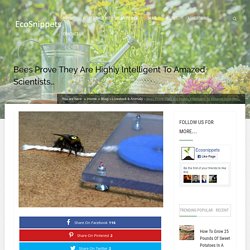 Researchers at the Queen Mary University of London conducted experiments with bumblebees to test their intelligence and the little critters did not disappoint. The experiments are usually used on apes and birds, but the bees’ quick learning showed for the first time that an invertebrate is capable of reacting in the same way in order to accomplish what they want. “We wanted to explore the cognitive limits of bumblebees by testing whether they could use a non-natural object in a task likely never encountered before by any individual in the evolutionary history of bees,” said Dr.

Clint Perry, joint lead author and also from QMUL’s School of Biological and Chemical Sciences. In one experiment, scientists trained 23 out of 40 participating bees to use their legs and feet to pull a string to reach their food. Five voices of the birds - Nature Mentoring. Semen has controlling power over female genes and behaviour. Semen says turn those genes on (Image: CNRI/SPL) THERE’S more to semen than sperm. 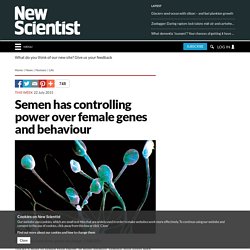 In many animals, seminal fluid alters both the bodies and sometimes even the behaviour of females. Human semen, too, triggers changes in the uterus, and might have wider effects on women, aimed at just one goal. Renée Duckworth- papers. The girl who gets gifts from birds. Image copyright Lisa Mann. 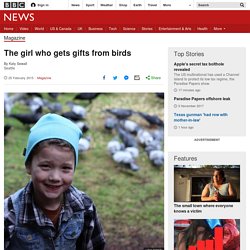 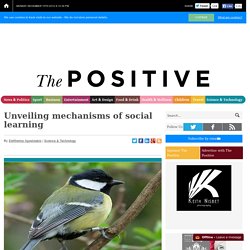 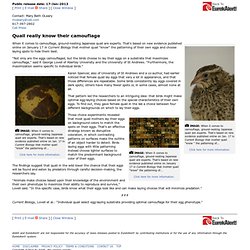 Monkeys Reject Food From People Who Are Mean To Fellow Humans. When we observe an interaction between two other human beings (Person A and Person B), we sometimes draw conclusions about the personality traits or character of these two individuals. 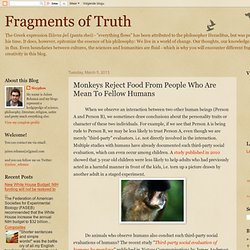 For example, if we see that Person A is being rude to Person B, we may be less likely to trust Person A, even though we are merely "third-party" evaluators. i.e. not directly involved in the interaction. Multiple studies with humans have already documented such third-party social evaluation, which can even occur among children. A study published in 2010 showed that 3-year old children were less likely to help adults who had previously acted in a harmful manner in front of the kids, i.e. torn up a picture drawn by another adult in a staged experiment. Do animals who observe humans also conduct such third-party social evaluations of humans? In front of each monkey, two actors performed either "helper" sessions or "non-helper" sessions. 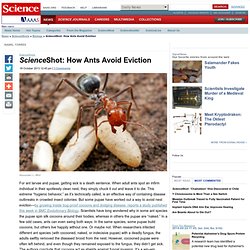 Tool use in crocodylians: crocodiles and alligators use sticks as lures to attract waterbirds. Mugger crocodile (Crocodylus palustris) at Madras Crocodile Bank, Tamil Nadu, India, with sticks on its head. 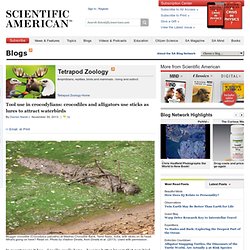 What's going on here? Read on. Photo by Vladinir Dinets, from Dinets et al. (2013). Nature Blows My Mind! Bowerbirds use math and color coordination. Thinboyfatter/CC BY 2.0 Bowerbirds as a group are some of the most fascinating of all birds because of their incredible and elaborate architectural abilities. 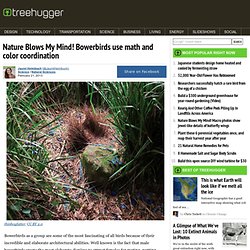 Well known is the fact that male bowerbirds create the most elaborate displays to attract females for mating, putting untold effort into designing, crafting, and displaying the perfect "love nest" to attract females of the species. But less well known is the amount of thought and calculation put into the creation of the perfect bower. The Real-Life Culture of Bonobos - Susan Savage-Rumbaugh - Mobento. Call that a ball? Dogs learn to associate words with objects differently than humans do. Related images(click to enlarge) Photo credit: Sally Smith Dogs learning to associate words with objects form these associations in different ways than humans do, according to research published November 21 in the open access journal PLOS ONE by Emile van der Zee and colleagues from the University of Lincoln, UK. 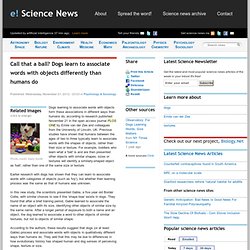 Previous studies have shown that humans between the ages of two to three typically learn to associate words with the shapes of objects, rather than their size or texture. For example, toddlers who learn what a 'ball' is and are then presented other objects with similar shapes, sizes or textures will identify a similarly-shaped object as 'ball', rather than one of the same size or texture. Corvids: The Birds Who Think Like Humans. Language of the American Crow, Corvus brachyrhynchos. For the latest crow news, click here. Featured Reports POSTED: November 15, 2011. A Different Kind of Smart.